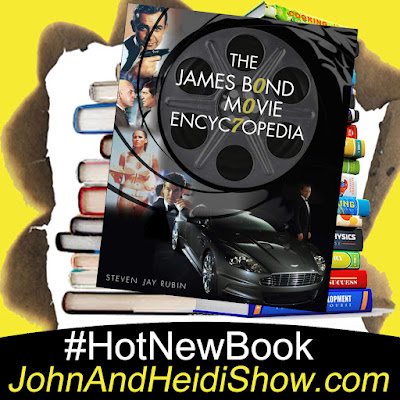 This weekend we visit with BESTSELLING AUTHOR Steve Rubin about his NEWEST BOOK The James Bond Movie Encyclopedia https://amzn.to/3j3GP84

National Be An Angel Day


A new study suggests that moms with young kids increased their booze consumption by nearly 325% between the start of the COVID-19 pandemic and the end of last year. (https://bit.ly/3m6DzuW)

During a video visitation with her jailed boyfriend, a Florida Woman exposed her breasts and masturbated, according to police who arrested her for the alleged lewd display. Danielle Ferrero, 38, traveled Sunday afternoon to the Charlotte County jail for an hour-long virtual visit with inmate Cody Thomas, 25. Ferrero was in the lockup’s Video Visitation Building, while Thomas was elsewhere in the facility. “The visitation session occurred via internet feed and there was no physical contact between the inmate and the visitor,” cops noted. During their visit, Ferrero and Thomas frequently talked in a lewd manner speaking of sex, sexual organs and sexual activities. Ferrero frequently flaunted and rubbed her breasts, covered, showing the revealing outfit that she was wearing calling her outfit "naughty." After Ferrero mentioned how she repositioned herself and almost had an orgasm, Thomas asked Ferrero to have one for her and she began to rock back and forth in her chair, appearing to have an orgasm, investigators allege. Near the session’s conclusion, Ferrero exposed her breasts to Thomas, “resulting in the visitation to be cancelled by staff at the visitation center.” At the time of the incident, Thomas was about a third of the way through a 30-day sentence for possession of drug paraphernalia and driving without a valid license. Meanwhile, police arrived to Ferrero’s Punta Gorda apartment on Wednesday to arrest her for “exposure of sexual organ in a public place.” Ferrero was released on bond Friday, and is scheduled for arraignment on September 1. (https://bit.ly/3gaINBV)

You can now get buried in a Los Angeles crypt adjacent to Marilyn Monroe and Hugh Hefner for the price of $2 million dollars. (https://bit.ly/3CVDOi3)

After suing Disney over their handling of her movie 'Black Widow,' Scarlett Johansson has been cast in a Wes Anderson movie. (https://bit.ly/3iVNNMu)

The bassist for "The Cure" has quit the band, saying that he's "fed up of betrayal." (https://bit.ly/3kg2ucX)

Britney Spears stated that she’s posing topless on Instagram frequently because she wants to look at herself in her “purest form.” (https://pge.sx/2W6sMWG)

Method Man is launching his own marijuana brand. (https://bit.ly/3xPnFab)

A Honus Wagner Baseball card has sold for $6.6 million. (https://es.pn/3CSAowI)

Shaq only ever made one three-pointer. Shaquille O'Neal made the only three-point shot he would ever make in his entire career on Feb. 16, 1996. When the Orlando Magic played the Milwaukee Bucks, O'Neal received an almost full-court pass before he shot the three-pointer. Despite being the only official three-point shot in his career, he went down in NBA history as one of the greatest of all time.

British researchers have developed a math equation to predict if married couples will get divorced. (https://bit.ly/3xoMlGk)

A snake collector whose escaped zebra cobra caused a frenzy for days this summer in a North Carolina neighborhood has pleaded guilty to a charge, agreeing in turn to pay restitution and give up his snakes. 21-year-old Christopher Gifford had been charged last month with 40 misdemeanors stemming from the venomous snake’s escape. Authorities ultimately captured it in a Raleigh neighborhood in late June. The snake actually had escaped last November, according to Gifford's lawyer, but he hadn't told anyone. Under Friday’s agreement in Wake County court, Gifford pleaded guilty to failing to report the missing snake. In exchange, the other 39 counts were dropped. The charge he pleaded guilty to also will be dismissed if Gifford successfully completes his probation. “It was a huge mistake,” Gifford said after the court hearing. “Whatever I can do to fix it, I’ve been trying to do.” The cobra was reported outside a home on June 28th and captured two days later. During the search, residents were told to stay away from the snake if they saw it and call 9-1-1. (https://abcn.ws/3lQg5dd)

A Kentucky resident has been indicted by a federal grand jury after filing a false loan application to receive coronavirus relief money. Khaldon Esawai, of Boone County, was indicted Thursday on a charge of wire fraud, which is punishable up to 20 years in prison. The indictment said that Esawai applied for $94,900 in coronavirus relief through a federal program that was meant to support small businesses who were negatively impacted by COVID-19. According to the indictment, Esawai applied for the loan in August 2020 on behalf of a company called Jericho Delights, LLC. On the application, Esawai claimed the company had 14 employees and made a gross annual revenue of $352,700 in the 12 months prior the onset of the pandemic in January 2020. The indictment claims that Esawai's company has no employees, and made no revenue during that time. Esawai also used an address in Camp Washington on the loan application, but according to the indictment, there is only an empty lot at the address. Sadly, there have been several other allegations of fraud schemes related to COVID-19 relief programs across the county. (https://bit.ly/3yyXLcd)

Couple Sends Books To Inmates To Show Them They Are Not Forgotten
https://www.sunnyskyz.com/good-news