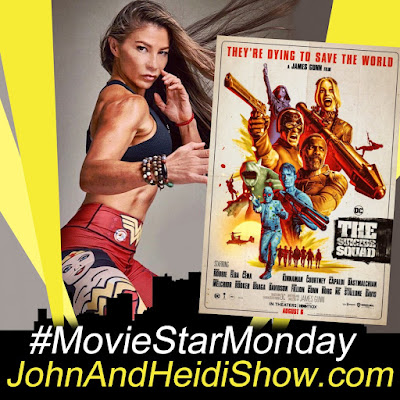 This #MovieStarMonday we visit with an awesome actress Mayling Ng, from Wonder Woman and more!

Mayling Ng is ready to kick it into high gear – with her black belt in Martial Arts, fitness championships representing Singapore (it’s been said she could bench press Arnold Schwarzenegger), and several noteworthy acting projects on the horizon.

Mayling will soon be starring in the DC Comics and Warner Bros. Pictures’ superhero action adventure film “The Suicide Squad,” premiering in theaters and on HBO Max on August 6th. From writer/director James Gunn, the film features a collection of the most degenerate delinquents in the DC lineup. Mayling plays ‘Mongal,’ the daughter of the Ruler of Warworld ‘Mongul the Elder’. Mongal is a malevolent, muscular alien with orange skin who doesn’t play well with others — Harley Quinn and Javelin in particular. She stars alongside the A-list cast of Margot Robbie, Idris Elba, John Cena, Taika Waitti, Pete Davidson, Flula Borg, Nathan Fillion, Storm Reid, and many more!

Mayling will additionally be joining the Power Rangers realm, appearing in the film “Legend of the White Dragon” which is currently in production. She is set to play police offer ‘Lieutenany Tek Boh,’ starring alongside Jason David Frank, Jason Faunt, Ciara Hanna, Yoshi Sudarso, and more. Mayling will also appear in “The Journeyman” which is currently in pre-production. The action-packed film follows a journeyman boxer’s tumultuous career as he attempts to make a grand comeback.

According to data from the American Society for the Prevention of Cruelty to Animals (ASPCA), one in five households acquired a pet during the coronavirus pandemic. Sadly, many shelters are now seeing more pets being returned. (https://fxn.ws/2TBR8X9)

Researchers from the University of California-San Diego find that couples who disagree on financial savings and investments are twice as likely to divorce. Study author Marta Serra-Garcia says, “Arguing about money is typically cited as a reason for divorce, but a main potential driver of these fights is differences in risk attitudes.” If you and your partner don’t see eye to eye on how much risk is acceptable, you won’t have financial freedom. (https://bit.ly/2VgUP54)

A 28-year-old Sterling Heights man was arrested last week after he allegedly admitted to police that he was drunk after he fell asleep in the drive-thru of Taco Bell. According to WDIV Detroit, Troy police were called to the Taco Bell around 2:33 a.m. on July 16th for reports of a truck parked in the drive-thru lane. When officers arrived, they found the man sleeping in his truck and were unable to wake him up right away. Police said it took several loud knocks and yelling to get the man to respond. Police said they smelled alcohol in the vehicle and although he initially denied drinking alcohol earlier in the evening, he allegedly admitted to it shortly thereafter. “Man, I’m drunk,” the man allegedly told officers. A breathalyzer test revealed the man had a .17% blood alcohol content and he was taken into custody. Another test conducted at the Troy lockup revealed a .14% BAC. The man has been charged with operating a motor vehicle while under the influence of alcohol.(https://bit.ly/3iStcr6)

Universal Studios is set to drop $400 million for the rights of the famed horror franchise “The Exorcist” to produce a new trilogy. The original 1973 film’s star, Ellen Burstyn, will reprise her Oscar-nominated role of Chris MacNeil in the new movie. (https://bit.ly/3x8O3eM)

Matt Damon told “Extra” that he is “so happy” for Ben Affleck and Jennifer Lopez. (https://pge.sx/2Vcarqv)

In a new interview, Ashton Kutcher and Mila Kunis revealed that they don't believe in bathing their kids or themselves too much. (https://cnn.it/3BOwAw3)


Minors logging on to Instagram for the first time will now automatically default to a “private” account as the company aims to create a more “safe and private” platform. (https://bit.ly/3f7SZKT)

In Australia, two giant Galapagos tortoises had a first date over Facetime. (https://bit.ly/3x515KB)

An 83-year-old woman was awarded a fifth-degree black belt in Karate by Chuck Norris. (https://fxn.ws/2UX3idW)

A photo of an embarrassed raccoon rescued by firefighters has gone viral because it appears to show the animal covering his face in shame of what he's done. (https://bit.ly/3f32QSi)

A video from a New Jersey carnival shows a teenager on a slingshot ride launching into the air and slamming face first into a seagull. (https://bit.ly/3y7J0wM)

Most people break up on Mondays. Searching through public Facebook data, Lee Byron and David McCandless found that relationships statuses changed for the worse two weeks before Christmas, around Easter, and on Mondays. Though this data may be somewhat misleading, as people might not be live-updating their breakups, it shows an obvious trend.


Russian President Vladimir Putin has directed the construction of two new so-called “Doomsday” planes that would function as command and control centers in the event of a devastating nuclear conflict. (https://bit.ly/3x753T0)

For many women, coming home to find a man in the kitchen cooking dinner is sweet — but when that man is wearing your clothes and you’ve never seen him before in your life, it's anything but romantic. Toronto Police are asking for the public's assistance with a Break and Enter investigation after someone entered a 33-year-old Toronto woman’s apartment without authorization and did some stuff that’s kind of weird for a burglar. Police say that they were called for reports of a break and enter. It is alleged that the victim “returned to her home and found a male inside her apartment” that day — a terrifying occurrence in its own right. Creepier still is that the man “was wearing clothing items belonging to the female.” Police say it is also alleged that the man “had cooked a meal” and “stolen personal items.” The suspect fled when the woman called police, but officers caught up with him a short time later and placed him under arrest. 35-year-old Robert Anthony Stumpo was subsequently charged with one count of break and enter. He appeared in court at College Park after which point police put out a call for help from members of the public. “Police are seeking the public's assistance, and information regarding any other possible victims,” reads the TPS media release. (https://bit.ly/3i36rBB)

A Connecticut landlord allegedly sneaked into his tenant’s apartment to sniff her underwear — and the disturbing act was caught on camera. Jorge Orellana-Arias, of East Haven, was charged with third-degree burglary after the woman told cops she had video of him inside her unoccupied apartment several times rifling through her and her daughter’s clothing. The woman first suspected something was wrong in May and started “barricading adjoining doors” in an effort to thwart the alleged intruder. But Orellana-Arias then used another door to get inside the residence. The woman set up hidden cameras inside the apartment to prove her intuition and the footage showed Orellana-Arias going through her and her daughter’s clothing. The woman also reported that Orellana-Arias entered the residence at one point while her daughter was home alone. He was apparently “startled” by the girl’s presence and left the apartment “immediately,” police said. The allegedly lecherous landlord was arrested Thursday before posting $25,000 bond. He was taken into custody after investigators looked into the woman’s claims and obtained an arrest warrant.(https://bit.ly/3BHe4FA)