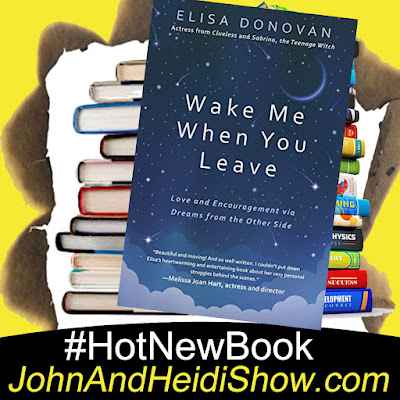 This #MovieStarMonday we visit with Elisa Donovan (Clueless, A Night Ath The Roxbury, Sabrina The Teenage Witch and more) We'll talk about her new memoirs “Wake Me When You Leave” https://amzn.to/2Wd2EsQ

A team from the University of British Columbia reports that petting and cuddling with a therapy dog significantly enhances well-being. (https://bit.ly/2XDWRNW)

A new study says having someone to talk to improves brain health and prevents Alzheimer's disease. (https://bit.ly/3iWwHhq)

A survey finds that the best state in which to give birth is Massachusetts.

Florida deputies arrested a man they say was speeding through Fort Pierce on a go-cart with cocaine and a handgun Monday night. Miguel Angel Sanchez, 21, tossed a backpack and fled on foot when a deputy spotted him. “K9 Mak located a handgun near Sanchez’s abandoned cart, and in his discarded backpack was more than 15 grams of cocaine,” according to police. Sanchez was booked into the St. Lucie County Jail on charges of fleeing and eluding law enforcement, resisting without violence, possession of cocaine and destroying evidence.(https://bit.ly/3k71Q0Z)

A new “Field of Dreams” television series, which is based on the hit movie starring Kevin Costner, is being developed at NBC Universal's streaming service Peacock.(https://bit.ly/2UtwWHr)

Jennifer Lopez and Ben Affleck were photographed sharing a passionate kiss outside of Affleck’s Los Angeles mansion after spending the day together to celebrate his recent birthday. (https://pge.sx/3g8LCDB)

In a new interview, actor Michael Keaton says there's power in saying "No" to Hollywood. (https://bit.ly/3k7R9eG)

In London, England, a cocktail bar has opened that caters to K-9’s, and encourages humans to bring their dogs. (https://bit.ly/37WNeM1)

The astronauts of the International Space station organized and filmed their very own “Space Olympics,” featuring zero gravity competitions. (https://bit.ly/3m90V2W)

United Airlines has sent a memo to its employees telling them not to duct tape passengers to their seats. (https://nbcnews.to/3yZxhAN)

Connecticut’s Quinnipiac University will be issuing fines and cutting internet access to non-exempt students who fail to show proof of a COVID-19 vaccination. The bold mandate was communicated in an email to about 600 students who so far have not requested an exemption or provided the university with documentation to show they have received the jab. (https://bit.ly/3gdK2QF)

A new invention from South Korea can make seawater drinkable.(https://bit.ly/3AMhJRf)

America's first bank robber deposited the money back into the same bank. At the Bank of Philadelphia on Aug. 1, 1798, a sum of $162,821 was stolen from the vault. There was no sign of forced entry so it was thought to be an inside job. Patrick Lyon was imprisoned as the prime suspect, as he had been the carpenter that worked on the vault doors. But then, they realized a man named Isaac Davis had been depositing large sums of money into the Bank of Philadelphia. It turned out, he was one of the robbers involved. In 1799, Lyon was freed, and Davis only ended up repaying the money without serving a day in jail.

An employee who turned a McDonald’s into a makeshift tattoo parlor is behind bars, charged with inking a juvenile inside the South Carolina eatery late Friday evening. Investigators today arrested 28-year-old Brandon D’Marcus Presha on a pair of criminal charges in connection with the August 6th tattooing at a McDonald’s in Laurens, a city about 70 miles from Columbia. Presha is being held in the county jail on $25,000 bond. He has been charged with tattooing a minor and tattooing without a license. Police learned of the tattooing after witnesses posted videos showing Presha--wearing gloves and seated at a table in the McDonald’s dining room--working on his underage client. Police have not revealed the age of the juvenile, whose arm was tattooed by Presha. According to the McDonald’s website, the restaurant in Laurens is open 24 hours. Presha pleaded guilty in December to a felony assault and battery charge, for which he was sentenced to three years in prison. A judge, however, suspended the sentence and placed Presha on probation for two years. His latest arrest will likely prompt prosecutors to file a probation violation charge with regard to the 2020 assault conviction. (https://bit.ly/3yFenyY)

The Florida woman who police say stole a car during a test drive is now behind bars. Clearwater Police arrested 43-year-old Johna Lamont on charges of grand theft auto and scheming to defraud. Police say Lamont took a 2018 Honda Accord out for a test drive last Monday and never returned. Authorities recovered the stolen car a few days later. Authorities smothered social media with photos of Lamont and a possible accomplice. Police said someone recognized Lamont and called police. In those photos, she had blonde hair. It appears she changed her hair color because her mug shot shows her with much darker hair. She's at the Pinellas County Jail on a $15,000 bond. (https://bit.ly/3sdj4xt)