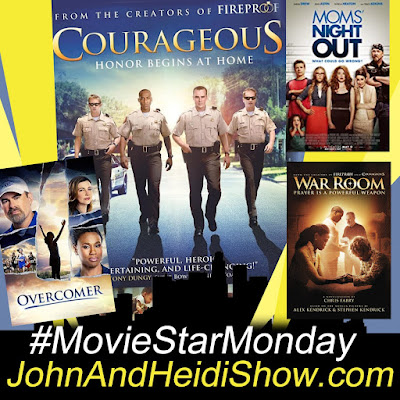 This #MovieStarMonday we visit with Alex Kendrick. Actor and film maker from the Kendrick Brothers. Their First Documentary, SHOW ME THE FATHER, is set for September 10th. In addition to that, COURAGEOUS Legacy, Kendrick Brothers’ Remastered Box Office Hit, Expanded with New Scenes, Set for a 10th Anniversary October Release. www.affirmfilmsupdates.com

A new study suggests that drinking eight glasses of water a day may keep your heart from failing decades later. (https://bit.ly/2WobGnl)

Florida man-made national news in early 2020 as police confiscated two bags of drugs neatly labeled “Bag Full of Drugs.” Two men were pulled over for a routine traffic stop but ultimately, the stop resulted in the confiscation of several different types of illicit drugs with an estimated street value of $15,450. Unfortunately, this is not the first Florida man drug story and it certainly won’t be the last.

Selena Gomez has backtracked her controversial remarks about Disney Channel, now singing a different tune about being “proud” of her work at the network. The “Lose You to Love Me” singer made headlines earlier this month when she said she “signed” her “life away” when she worked for the House of Mouse. (https://pge.sx/3mwrpvj)

New York City is preparing for the reopening of its Broadway Theaters, which will return to full capacity in the first week of September. (https://bit.ly/2Wa5wr8)

An Italian Student has become a TIK TOK star after tattooing his vaccination barcode on his arm and using it to scan into a McDonald’s kiosk. https://bit.ly/3sEZQRF

The Wall Street Journal reports NFL stars are protesting their contracts by showing up to training camps and not practicing. (https://on.wsj.com/3sxo403)

A man in Russia survived after accidentally shooting himself in the chest with a nail gun. He was nailing down floorboards in his bathroom when he tripped and fell and fired a two-inch steel tack into his chest, barely missing his heart.

Researches at the University of Vermont studied 50 million tweets a day, scoring the “happiness” of people’s words to monitor the national mood. One consistency from the study: being outdoors — and specifically parks — make us happier. Researchers looked at anonymous Twitter data for the study and tweets from parks and after park visits were more positive. The powerful effects of nature are strongest in large parks with more trees, but smaller neighborhood parks also provide a significant boost. Their impact on happiness is real, measurable, and lasting. Tweets show that parks increase happiness to a level similar to the bounce at Christmas, which typically is the happiest day of the year.

You're pronouncing Dr. Seuss' name wrong. Dr. Seuss, the popular children's book author who is known for his rhyming skills, was born with the name Theodor Seuss Geisel. Seuss is his mother's maiden name, and their family pronounces it as "soice" (rhyming with voice). Seuss' college friend Alexander Liang even wrote a poem about the common misconception.

A district judge in Japan sentenced a top boss in the country's notorious organized crime group, which is known as “the Yakuza,” to death, a punishment believed to be the first of its kind for the mob. (https://fxn.ws/3DbHXyR)

A 51-year-old man was attacked by a hatchet-wielding maniac in the ATM vestibule of a Lower Manhattan bank Sunday night. The male suspect whacked the victim in the head and thigh as he was standing in front of the cash machine at a Chase bank on Broadway near Beaver Street in the Financial District at about 5:20 p.m., sources said. The brute fled after the attack, but left the hatchet behind, according to the sources. He was still being sought late Sunday. “The guy that got hit in the head was screaming,” a witness said. “It’s crazy. People were shouting and we saw the guy laying down — a lot of blood." The victim was hospitalized in stable condition. (https://bit.ly/3iQcZnB)

A Baltimore Sun report on a strange federal lawsuit begins with a crazy opening sentence: "Demetra Sweet didn't know, as she sang at her husband Ivan's Baltimore funeral service in late January, that apparently he already had been buried days earlier and miles away." When 67-year-old Ivan Street died in January of congestive heart failure, wife Demetra Sweet made plans to have him cremated through Wylie Funeral Homes. Then a second woman, also claiming to be his wife, came forward and asked the funeral home to bury Ivan Street instead. The funeral home, according to Demetra Sweet's lawsuit, sort of did both. She alleges that Wylie had Ivan Sweet buried in a local cemetery, then staged a phony memorial service for her with an empty urn. She's seeking $8.5 million in the suit. "We vehemently deny the claims advanced by Ms. Street and assert that the underlying matter was handled with the utmost sensitivity toward the loved ones of the deceased," says Brandon Wylie, president of the funeral home. The Washington Post weighs in and concludes that Demetra Street was indeed Ivan Street's legal wife at the time of his death. However, they were separated and living apart. It couldn't determine the legal relationship of Ivan Street and the unnamed woman. Demetra Street's lawsuit says the second woman presented the funeral home with a marriage license from 1997, but one that wasn't official. She "may have believed she was the wife," says Demetra Sweet's lawyer, "but she failed to produce a marriage certificate with a seal on it." (https://bit.ly/2VWFUxt)