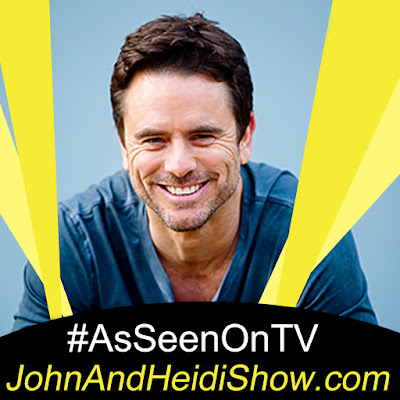 Today we visit with singer/songwriter and actor Charles Esten - best known for his roles as Ward Cameron on the NETFLIX global hit show Outer Banks, and Deacon Claybourne in ABC/CMT’s Nashville, has performed hundreds of live concerts. He was also on Who's Line Is It Anyway (one of our favorite shows back then)

Your sense of smell is stronger when you’re hungry, according to researchers at Northwestern University. More specifically, what they found is that a person’s nose becomes less sensitive to the odor of foods if they have just eaten a similar item. For example, you are less likely to crave a cinnamon bun after smelling one if you’ve just eaten a sweet treat. But as you know, even a slight hint of cinnamon bun smell will drive you to go buy one if you haven’t eaten yet.

A survey found a quarter of women use a filter on photos of themselves before posting on social media. The study of 2,000 females found this figure more than doubles for women 24 and under.

A suspect whom witnesses described as ‘out of control’ and armed with a knife was captured Monday after officers allegedly found him cutting a vehicle’s car tires while he was trying to escape from police. According to the MPD report, officers responded shortly before 9 p.m. to the 500 block of Bram Street, between the Alliant Energy Center and Park Street. Once there, witnesses told the officers that the suspect, later identified as Michael Ring, was “intoxicated, high on narcotics, and out of control.” The 37-year-old Ring reportedly fled as officers arrived. As he hid from them, Ring was sprayed by a skunk, according to police. When officers eventually caught up with Ring, he was allegedly cutting a vehicle’s tires. He tried resisting arrest but was eventually detained and taken to a local hospital for examination before being transported to the Dane Co. jail, the police report stated. Court records show he was booked on counts of: Discharging bodily fluids on a public safety worker, Resisting, Disorderly conduct while armed; Criminal damage to property, and an additional unspecified warrant. (https://bit.ly/3k0DpCx)

Ethan Hawke says he got off to a rocky start with Robin Williams when they worked together. “Dead Poet’s Society” was one of Hawke’s earliest screen roles, and proved to be the breakthrough that propelled him to a successful career. In a new interview, he recalled that he initially didn’t get along with star Robin Williams. Quote: “I thought Robin hated me. He had a habit of making a ton of jokes on set. At 18, I found that incredibly irritating. He wouldn’t stop and I wouldn’t laugh at anything he did.” Williams eventually became one of his earliest champions, and even put him in touch with his first agent.

With “Jungle Cruise” crossing the $100 million mark at the domestic box office on the weekend, Disney has already pulled the trigger on a sequel. Stars Dwayne Johnson and Emily Blunt are set to return as wisecracking skipper ‘Frank Wolff’ and intrepid researcher ‘Dr. Lily Houghton’, for another adventure. The movie, which has a 92% score on Rotten Tomatoes, was in development for more than 15 years before finally making its way to the screen. It is based on the popular Disneyland attraction, which was one of the original rides when the theme park opened in 1955.

What do men and women have in common? We both love to stare into each other’s eyes. The eyes are the first thing we notice about the opposite sex. Men notice first (in order): eyes, smiles, breasts, hair, weight. Women notice: eyes, smiles, height, hair, dress sense.

Research shows car steering wheels carry twice as many germs as toilets. Tests showed that steering wheels averaged 41,600 germs, compared with 17,400 on a toilet seat. Only 13 percent of people clean their cars regularly, while 5 percent never bother to clean them at all. Men clean their cars 14 times a year, while women manage 12 cleans. Those around 55 clean the most.

To the delight of grownups everywhere, a study proved what we suspected all along: drinking alcohol can help us creatively solve problems. To test this, the authors gave the participants some bagels and a couple of vodka-and-cranberries, and then had them solve puzzles. The results? Study participants were better at solving the puzzles after the cocktails. So next time you feel stuck on a problem, go ahead — have a cocktail.

‘Type O’ blood was originally named ‘Type Zero’ blood, due to the lack of glycoproteins in the red blood cells. It was misread and is now called Type “O” blood. It is still often called ‘0’ (zero, or null) in other languages.

German police called to the scene of a suspected shooting found a man who had fallen asleep with an action film running at top volume on his TV.

A Florida woman is accused of stealing a Bentley sedan worth about $200,000. According to Pinellas County Sheriff’s Office online booking records, 52-year-old Sally Jo Davis was arrested and charged with grand theft of a motor vehicle and burglary of an occupied dwelling. According to the Clearwater Police Department, Davis entered a gated condominium in Clearwater Beach by following a resident’s vehicle into the parking garage while the gate was open. Surveillance video showed Davis walking into the building while a resident was leaving. According to police, Davis entered a penthouse suite through an unlocked door and took the keys to the Bentley. Davis then found the luxury vehicle in the parking garage and allegedly drove it to her home. According to a police report, authorities located the Bentley at Davis’ home in Plant City a few days later and arrested her. (https://bit.ly/3sL3wBu)

A Connecticut woman faces a week in jail and $2,400 in fines after being prosecuted for walking across a thermal area in Yellowstone National Park. “Although a criminal prosecution and jail time may seem harsh, it’s better than spending time in a hospital’s burn unit,” said acting U.S. Attorney Bob Murray in a press release. 26-year-old Madeline Casey of New Hartford, Connecticut, appeared before Magistrate Judge Mark Carman on August 18th in Mammoth Hot Springs for sentencing. She was charged with walking off the boardwalk in the Norris Geyser Basin to get closer to a thermal pool and geyser. Casey was photographed and filmed venturing off the boardwalk, despite the fact that many signs are posted along the route warning visitors. “Boardwalks in geyser basins protect visitors and delicate thermal formations,” said Morgan Warthin, Yellowstone public affairs officer. “The ground is fragile and thin and scalding water just below the surface can cause severe or fatal burns.” In addition to the jail time, Casey was ordered to pay a $1,000 fine, $40 in fees and a $1,000 community service payment to the Yellowstone Forever Geological Resource Fund. (https://bit.ly/3gCumGV)