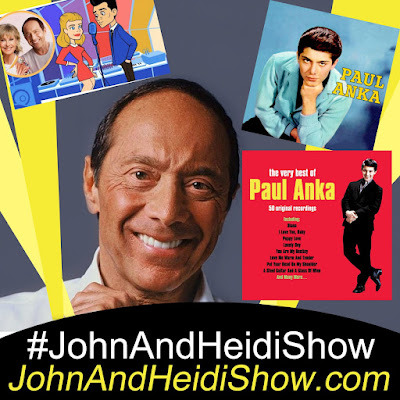 Today we visit with music legend and current Tik Tok sensation Paul Anka. He has plenty to celebrate in 2021. Anka’s milestone 80th birthday coincided with the release of Making Memories a brand-new collection of reimagined classics and new recordings. All of the songs have been penned and performed by this legendary songwriter and the album will also include duets with Olivia Newton-John, Il Divo and, on the heels of the recent 50th anniversary of “My Way,” a new version of the classic hit featuring Michael Bublé and Andrea Bocelli.

The album was released on August 13th.

According to a new survey, nearly a third of Americans have been so caught up with work, life, and kids that they haven’t had a day to relax alone in more than three months. Researchers find that 65% admit that they would like to spend more time on self-care but feel they don’t have the downtime to make it a routine. (https://bit.ly/3t6iK4c)

Authorities in Missouri are searching for a woman who was mistaken for another inmate and wrongly released from jail over the weekend. Sheriff Aaron Wilson said that Ellen Goble—who was held in Randolph County Jail on charges of resisting arrest, burglary, drug possession, and operating a vehicle without a valid license—looked almost identical to the inmate due for release, who was asleep two cells away. He notes the two women have essentially the same hair color, eye color, height, and weight. When a guard, new on the job, came to collect the other inmate on Saturday, he mistook Goble for her; Goble had been moved out of her usual cell while it was being cleaned. Once the guard led Goble out of the cell, the 24-year-old took matters into her own hands. Wilson says she committed identify theft by claiming to be the other inmate and then signing that woman's name during the check-out process. Staff only realized the mistake when other inmates told them Goble had posed as someone else. Authorities are still searching for the woman—described as 5'3", 110 to 120 pounds, with brown hair and eyes—who is from Randolph County and believed to still be in the area. Wilson said that he expects her to be in custody by the end of the week. Meanwhile, the sheriff's office says it's reviewing its policies and considering new ones to prevent a repeat embarrassment.(https://bit.ly/38DS4ON)

Jessica Chastain’s skin has been left with what she calls “permanent damage” following her transformation into Tammy Faye Bakker. She stars as the late televangelist, who was known for caking her face in make-up, in “The Eyes of Tammy Faye”. Chastain has revealed that wearing the heavy film make-up left her skin “stretched out”. She says it took 7½ hours to have the make-up applied, and it got “so heavy and hot”, she became worried about her circulation. The upcoming film is based on the 2000 documentary of the same name, and the cast also includes Andrew Garfield as Jim Bakker.

“Jeopardy!” is resuming its search for a new host after its first pick, executive producer Mike Richards, stepped down amid controversy over past offensive remarks. So who might take his place? Former champion Ken Jennings has long been a fan favorite, and former Hollywood Reporter editor Matthew Belloni is reporting that he has been told by ‘show insiders’ that “it’s now Jennings’ job to lose.” Similarly, CNN’s Brian Stelter reports that “most of the sources” he has spoken with “said Ken Jennings is now the hands-down favorite,” with one TV agent saying: “They have to give it to him now, don’t they?” He also notes Jennings was “said to be a finalist the first time around.”

Apparently, “Jeopardy!” honchos REALLY want Mayim Bialik to step in as new daily host following the quick exit of Mike Richards, and they’re willing to bend over backwards to show her how much they mean it. Bialik is the top choice to take over as “Jeopardy!” host, but the problem is she’s also busy with her new FOX sitcom, “Call Me Kat,” and shooting schedules for that show are set in stone. Sources say Sony bosses have even offered up the possibility of shooting on weekends and hiatus weeks to squeeze in more shows with her as host. Bialik is already locked in for 15 episodes, which she has been taping this week. Earlier this month, she was named as the host of Jeopardy! prime time specials.

A Florida woman was arrested for stealing hundreds of dollars in Tommy Hilfiger merchandise, and can be seen in her mugshot photo wearing one of the shirts with the tag still on it. (https://bit.ly/3sYP8Wk)

Two-thirds of us are a little-bit obsessive about where we relax. A study of 2,000 people finds that 66% of people have their favorite spots, or “assigned seating” throughout their homes. In fact, they are so loyal to their favorite spots, that they argue with another family member about sitting in their “spot” twice a month. Whether it’s at the kitchen table, dad’s recliner, or the family couch – 68% say they’re “very passionate” about their spot. The survey, conducted by OnePoll, also found that 55% would feel uncomfortable sitting anywhere else but their favorite spot. Why are we attached to certain spots? 63% say they associate positive memories with particular areas or pieces of furniture in their home.

An Oregon hospital, has installed a dinner plate throwing booth to provide overworked caregivers with “alternative stress relief”. Oregon was once the poster child for limiting the spread of the coronavirus, but now it is being hammered by the delta variant. Oregon keeps breaking records for the number of hospitalized COVID-19 patients, and guard troops have been dispatched to hospitals, which are stretched to the breaking point. And that’s something that is definitely not going unnoticed by medical staff. The wellness department at Portland, Oregon’s Salem Hospital, which normally recommends yoga and deep breathing for relaxation, recently set up a booth and filled it with dinner plates for a different kind of stress relief. According to a nurse there named Lisa: “We put on safety glasses. And we took plates and we shattered them. And I kept going back. I kept going back, and they told me I had enough turns.”

There is no single word for the back of the knee.

Royal Insiders believe that Prince Harry and Meghan Markle will fade into obscurity over the next ten years like other members of the Royal Family who were not in line to the throne.
(https://www.dailymail.co.uk/femail/article-9937263/Prince-Harry-Meghan-Markle-risk-fate-Edward-VIII-Wallis-Simpson-film-maker-claims.html)

An unmasked Canadian man was so peed-off about a Dairy Queen‘s face covering mandate that he relieved himself on the counter of the fast food restaurant. The Saturday night incident happened in Vancouver Island’s Port Alberni. The peevish customer argued with staff about British Columbia’s mask policy before unzipping his pants and defiling the DQ service counter as the staff shrieked in horror. “It’s not a BC policy. BC policy says you have to observe exemptions,” the dribbling dissenter said in the video before apparently taking matters into his own hands. “F—ing psychopaths,” he exclaimed before walking out of the store. “This is the first incident of this nature,” RCMP Sgt. Chris Manseau told the outlet. “I think people should just wear their masks and be safe and be polite.” Police continued to search for the unidentified urinator. (https://bit.ly/3Dy1wl7)

A motorcyclist who was arrested following a high-speed police chase told cops that he was “trying to show off” for his female passenger, with whom he was on a first date. Investigators say that 22-year-old Taylor Beverly ran through a red-light Saturday night while driving a white 2017 Suzuki with a female passenger. Beverly looked back and made eye contact with nearby Clearwater Police Department officers as he raced away. Police then activated their cruiser’s lights and siren and sought to make a traffic stop. But when Beverly “drove well over 100-mph” and began to weave in and out of traffic and run multiple red lights, they broke off the pursuit. After the cops who initially gave chase alerted other units to be on the lookout for the suspect, Beverly was taken into custody around 10:00 p.m. after stopping his motorcycle at an intersection. After being read his rights, Beverly reportedly confessed and “stated he was trying to show off for his date.” His passenger, however, was not impressed. The woman told cops she was “screaming at him to stop, but he refused.” Officer Kyle Bingham noted that, “This was their first date.” Beverly, who lives in Tampa, was charged with a felony for fleeing cops at high speed with wanton disregard for the safety of others. (https://bit.ly/2WBN0YX)