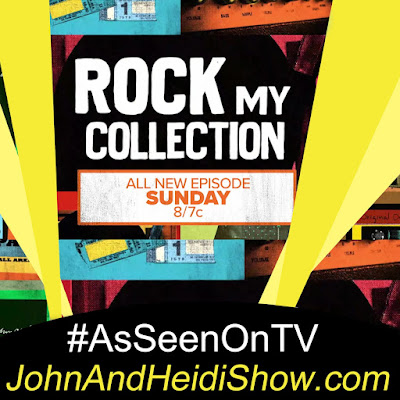 After appraisal, collectors will have the opportunity to keep their items or put them up for auction. In addition, AXS TV has partnered with auction powerhouse Gotta Have Rock And Roll, a popular online auction house that specializes in music memorabilia, presenting an exciting interactive component that allows viewers to get in on the action and own a part of music history. Viewers may bid on select items by visiting www.AXS.TV/RockMyCollection with new auctions going live following each premiere episode.

British researchers say a firm handshake could be a sign of a longer life expectancy. Scientists found that elderly people who could still give a firm handshake and walk at a brisk pace were likely to outlive their slower peers. They found simple measures of physical capability like shaking hands, walking, getting up from a chair and balancing on one leg were related to life span, even after accounting for age, sex and body size.

Until about age 12, boys cry as often as girls

Tulsa police arrested a man Friday night after they say he was on top of their roof trying to flag down passing aircraft. An officer said he spotted the man on the roof of the TPD Mingo Valley Division police station. Officers climbed on the roof and arrested him. The man, identified as Raul Zeoeda Rios, was unable to explain why he was on the roof and trying to flag down a plane. Police noticed symptoms of methamphetamine intoxication. Officers believe Rios climbed over the 7-foot-high, barbed-wire-topped security fence surrounding the building. Rios told police he climbed a water pipe to get on the roof. He was arrested for public intoxication and trespassing and booked into the city jail.(https://bit.ly/3nbTk43)

Mark Wahlberg is set to star opposite Kevin Hart in “Me Time,” a comedy at Netflix. It centers on a stay-at-home dad (Hart), who, with some “me time” for the first time in years while his wife and kids are away, reconnects with his former best friend (Wahlberg) for a wild weekend that nearly upends his life. It’s a big get for Netflix, as Hart has been one of the few consistently bankable box office stars recently, with his movies grossing over $4 billion worldwide.

Could a reboot of “The Office” be on the way? According to NBCU content chief Susan Rovner, it’s a possibility. She recently attended the Edinburgh International TV Festival, where she initially said “no comment” when asked about plans for a potential reboot of the hit NBC sitcom. When pressed, she said: “Whenever (exec producer) Greg Daniels wants to do one, we’re standing by.” In January, Daniels said that a reboot of The Office was not currently in development but is “not impossible.” He elaborated by saying: “I would want to be involved, and I’ve got two other shows I’m working on right now.”

We’re all obsessed with finding the best: the best TV, the best laptop, the best toothpaste. At a certain point, though, you’re just wasting time. Personal finance advisor and author Ramit Sethi says we shouldn’t spend more than two seconds on decisions that don’t really matter. The next time you find yourself deliberating, ask: “Is this something that actually matters? Or should this be a two second decision?”

A bank robber in England was caught after giving his own bank account details and asking the teller to deposit the money into his account.

The U.S. has fallen to tenth place in global competitiveness.

Two young nitwits committed a series of drive-by slushie attacks that they recorded with a GoPro camera for uploading to YouTube, according to Florida cops who charged the duo with battery and conspiracy. Police say 19-year-old Rafael Mercado and 18-year-old Ke’ziyah McKay targeted victims Saturday afternoon in Pinellas Park, a city in the Tampa Bay area. As alleged in a criminal complaint, the teenage dirtbags purchased seven slushies from a Circle K store and then proceeded to throw the frozen drinks at “multiple persons for the purpose of their YouTube video content.” The slushies were launched at pedestrians by McKay, who was a passenger in a vehicle driven by Mercado (who filmed the misdemeanor action with McKay's GoPro camera). After Mercado was collared by a Florida Highway Patrol trooper, he reportedly confessed and said that he had done similar slushie attacks a week earlier, “also for the purpose of the YouTube content.” McKay is listed as Mercado’s co-defendant in the complaint, but he has yet to be arrested. Mercado was freed from the county jail Saturday night after posting $650 bond. (https://bit.ly/38SqZrk)

Wind doesn’t make a sound until it blows against an object.

A couple in China was filmed laying in a bed that was suspended 1,000 feet in the air. (https://yhoo.it/3zYkuz9)

A 49-year-old Caldwell man has been arrested, accused of pickpocketing several lizards from local pet stores. According to Boise Police, Christopher Garcia would wait until there were no employees around and would then would stick a lizard in his pocket and walk out of the store. Garcia was arrested on two counts of felony grand theft. He's currently being held in the Canyon County Jail. (https://bit.ly/38QJ74K)

A New Hampshire man was pulled over on Labor Day and arrested after allegedly driving 135-mph—with two young kids in the car. 31-year-old Joshua Parent allegedly had two children under the age of five in the car with him when police stopped him on the state's Route 101 on Monday. CBS Boston reports that he's been charged with reckless operation and child endangerment, along with other violations. Extra patrols were added in the area for the holiday weekend, and more than fifty drivers were stopped. Of those, eleven were allegedly driving over 90-mph. (https://bit.ly/3zQPqRC)