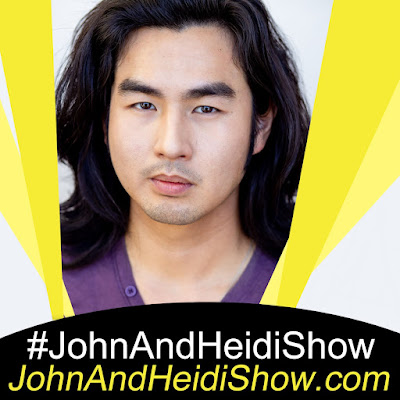 This weekend we visit with Joshua Christian Azali, model and actor.
https://www.imdb.com/name/nm11993635/

Which did more people choose in these silly national survey questions?

• What if your lifespan is increased by 50 healthy years, but you step on a Lego brick when you least expect it a couple of times a day for the rest of your life? (52% said no to this.)

• What if there was always a new hundred dollar bill in your pocket, but every time you took it out a human died on the other side of the world? (64% said no.)

• What if you could live forever, but you can never talk to any again? (Only 19% said yes.)

• What if your dream job came true, but your salary was paid in chocolate bars. (68% said no.)

A man was arrested after police found 35 pounds of marijuana in the trunk of a rental car. A trooper spotted a white Toyota Camry with a New York registration plate following very close to a vehicle pulling a trailer in an active work zone. Once out of the work zone, police pulled the Camry over. Police approached the vehicle to find 23-year-old Zhiying He of Ohio as the driver of the white Camry. He provided police with his Ohio driver’s license and did acknowledge that he was following the vehicle with the trailer very close. When speaking with He, police noticed a smell of marijuana. He explained, as the trooper was writing up the citation, that he was returning from a music festival in Manhattan and he did smoke marijuana while he was there, but he didn’t smoke at all when he left. He also provided police with the rental agreement which showed that he rented the car from Budget in Brooklyn and that the vehicle had to be returned to Columbus, Ohio by 4:30 p.m. He denied police access to search the vehicle and then police had the vehicle towed. They then obtained a search warrant and found a bag in the trunk with two large plastic-zip bags with 35 bags, each filled with one pound of marijuana. He told police that a man gave him a bag to take back to Ohio and that the bag was already in the car. He faces a felony charge of manufacture, delivery or possession with intent to manufacture or deliver marijuana. He has a monetary bail set at $50,000 and currently awaits a preliminary hearing scheduled for September 22nd. (https://bit.ly/2YHWeU7)

Vin Diesel is feeling very emotional before making “Fast & Furious 10,” which will be part of the franchise’s two-part finale. (https://bit.ly/3yoXiYZ)

Disney is preparing to offer four tiers of high-priced annual passes to their theme parks. (https://bit.ly/3mKdVw9)

Leatherface will next be revving up his chainsaw exclusively on Netflix, as the streaming giant has secured the global rights to the next installment of the long-running Texas Chainsaw Massacre horror movie series. (https://bit.ly/2WGoNAr)

“Paranormal Activity 7” will debut on Paramount+ this Halloween. (https://bit.ly/3n63tzt)

A senior citizen in Germany robbed a bank so that he would no longer have to live with his wife.

A Detroit doctor has gone viral on TikTok for telling us not to sleep in the nude. He says our undies keep particles from spreading in the bed.

A survey finds we spend 100 days of our lives trying to figure out what TV shows or movies to watch.

According to research, humans have had the metabolism to process alcohol successfully for the past 10 million years.

The world's population will hit 8 billion by the year 2026.

A study found that an ancient species of ape stood 10 feet tall.

Life in a sewer pipe was a better alternative than jail for a thief on the run in India. The man crawled into a narrow, 100-yard long sewer pipe after stealing from a railway station. After a four-hour standoff with police, a fire company was brought in to flush the man from hiding. A burst water did the trick and the man was blasted from the sewer.

A disruptive passenger on an American Airlines flight from Los Angeles to Salt Lake City was detained on Monday after yelling at the flight crew and refusing to sit down as the plane prepared to land. Salt Lake City Police identified the man as 61-year-old Timothy Armstrong of Las Vegas. Video from the Labor Day flight shows Armstrong berating a flight attendant near the front of the plane as the flight crew prepared to land. The flight attendant can be heard telling Armstrong to take his seat multiple times. After finally returning to his seat, Armstrong unleashed an expletive-filled tirade against the flight crew. Once seated, video shows Armstrong removing his mask and growling like an animal as he rubs the mask all over his face.

The United Kingdom has swapped its vaccine passport so people will no longer need them while trying to get into nightclubs. They've also eliminated the vaccine passport at the cinema. (https://bit.ly/3C1ay8z)

Altoona Police in Pennsylvania said a woman was waiting at an apartment for officers to respond and admitted to stabbing someone she lived with after the two argued over how loud she was being. Shannon Erb has now been charged with attempted criminal homicide, two counts of aggravated assault and recklessly endangering another person after police said the victim suffered severe wounds to their neck and chest Sunday. Police were called to IDA Towers on 12th Street at approximately 4:47 a.m. for a stabbing that was called into 9-1-1. Police said Erb was standing and waiting for officers to arrive and admitted to officers on the scene and detectives at the station that she stabbed the victim. The person was taken to an area hospital for treatment. Police said the officers located a 15-inch kitchen knife they believe was used in the stabbing. Erb is in the Blair County Prison on $500,000 cash bail.(https://bit.ly/3hi9nts)

A 46-year-old woman threatened there was a bomb in her checked luggage when she was told she couldn’t board a flight at Fort Lauderdale-Hollywood International Airport because of her late arrival at the gate. It happened at about 8:45 p.m. Monday in Terminal 3 at FLL. Passengers were evacuated from the plane, which had been taxiing on the runway, as the Broward Sheriff’s Office’s bomb squad investigated. The FBI was also contacted. BSO found no actual threat but arrested Marina Verbitsky of Chicago. She is accused of cursing at three JetBlue employees when she, her husband, and child were not allowed to board the flight. An arrest report says Verbitsky had “malicious intent” when she made the bomb threat. She is being held at the Main Jail in Fort Lauderdale and faces one count of false reporting concerning planting a bomb, explosive or weapon of mass destruction. Verbitsky appeared in court Tuesday. Her bond was set at $10,000, and she must undergo a mental health evaluation.