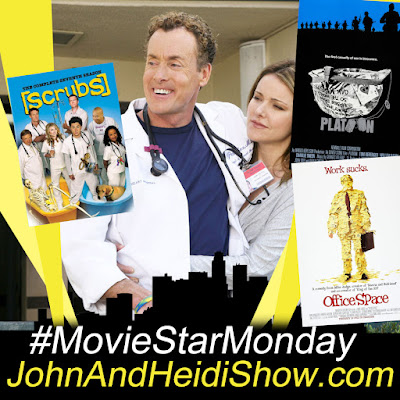 This #MovieStarMonday we visit with John C McGinley. Known for many comedic roles in movies and TV show like Office Space, Wild Hogs and Scrubs. He's now joining the crew on Brooklyn 99 for their final season on NBC TV. Watch all past episodes at https://www.peacocktv.com/

A new study from Binghamton University found that your mental health depends on what's in your diet. The study claims that caffeine causes mental distress in Young Adults. The study also found that women benefit from eating breakfast daily, moderate exercise frequently, and keeping fast food to a minimum.(https://bit.ly/3tBKMVa)

A new study claims that 45% of people suffer from sleep deprivation. The study found that recovering your memory after a lack of sleep takes a lot longer than people realize. (https://cnn.it/3C4zXye)

A Florida Woman who had to be pulled from the cab of a fire engine that she tried to steal denied being under the influence of the usual street potions, but said that she had taken the “Elixir of Life” before trying to boost the emergency vehicle. Responding to a call about a woman acting erratically on the beach in St. Augustine Beach, cops and fire rescue workers discovered 39-year-old Kailani Jo Kroll in distress. Kroll, who lives two blocks from the beach, said she needed CPR and other treatment. But while being escorted to an ambulance, she began running back and forth. “Due to no crime being committed at this point...I had no reason to chase her,” Officer Brandon Hand reported. But as police and firemen began entering their vehicles to depart the scene, someone yelled, “She’s stealing the truck!” Kroll, investigators allege, had opened the door of an unsecured fire engine and got in the driver’s seat. St. Johns County Fire Rescue personnel responded by pulling her from the cab. After reportedly struggling with cops who tried to handcuff her, Kroll offered an apology, according to a police report detailing the incident. “I’m sorry for trying to take the truck, I lost my marbles,” she said. When Officer Hand asked if she “was under the influence of anything,” Kroll replied “she was not but had taken the ‘Elixir of Life.’” She was arrested for grand theft auto, a felony, and resisting law enforcement officers, a misdemeanor. (https://bit.ly/3E7F6at)

Actress Rose McGowan ripped Oprah Winfrey in a new Tweet, stating that the media mogul is, quote, “as fake as they come.” McGowan also Tweeted a photo of Oprah standing next to former Hollywood producer and convicted rapist Harvey Weinstein. (https://pge.sx/3jz1IIN)

HOW GUYS INJURE THEMSELVES

• 27,007 are injured using chainsaws while clearing brush or cutting firewood.

• 12,121 are injured around fireplaces or chimneys.

The wildlife are getting smarter. A video on social media shows a black bear near Lake Tahoe opening a garage door. In the video a man can be heard calling out to the bear from his car and honking his horn. As the bear opens the garage door we see what appears to quite a few 5-gallon buckets of paint.
https://digg.com/video/black-bears-near-lake-tahoe

A Belgian teenager was caught speeding after driving less than a mile with his new license. The teen's father had to drive him to a police station to retrieve his revoked license.

A man faces charges of animal cruelty and burglary after allegedly throwing rocks at and physically abusing horses earlier this week in Phoenix. According to the Maricopa County Sheriff's Office, deputies responded on September 2nd around 9:30 a.m. to an undisclosed location in Phoenix for a report of animal cruelty. A 9-1-1 caller reported that their surveillance video recorded two people throwing large rocks at their two horses for about a half-hour earlier that morning. Court paperwork revealed that the woman's husband thought the horses were simply acting up, but after looking at the surveillance video, found two people, identified as 20-year-old Lawrence Weinhart and a teen boy, "taunting, punching, and throwing large rocks" at a horse. Documents state both of them could be seen throwing rocks, but detectives could not positively identify them because of the poor quality of the video. Deputies were able to identify the suspects because of the couple's social media campaign. Deputies say multiple tips led them to Weinhart as well. A friend of the two suspects told investigators that although the video wasn't clear, he immediately knew it was them. MCSO says Weinhart faces one count of third-degree burglary and two counts of animal cruelty. (https://bit.ly/3tIa9VG)

A Kingman woman has been arrested after investigators said she threw multiple Molotov cocktails at a house. The Mohave County Sheriff's Office arrested 36-year-old Angelica Ana Rose Pratt after video surveillance footage shows Pratt purchasing the glass jar used in the incident. Deputies responded to a possible arson call on Thursday around 8:30 a.m. The victim told police three different Molotov cocktails were thrown at his home and cars. Two of the victim's cars were damaged by the bombs. The total cost of damages was around $8,000, according to the victim. Witnesses said a silver SUV had been sitting outside the victim's house multiple times early in the morning. Detectives then found a burned glass jar used to start the fire in the backyard of the victim's home, with a price tag on the bottom from a local dollar store. Detectives traced the jar back to a store near Highway 66 and got video surveillance of the store from Monday afternoon. In the surveillance video, a silver SUV pulled into the parking lot and Pratt went into the store and bought the glass jar, then later left. Pratt's SUV was traced back to a home near Thompson and Lum avenues, where she was found. She was arrested and admitted to starting all three fires, MCSO said. Pratt faces two counts of arson of a structure or property and one count of arson on an occupied structure. (https://bit.ly/2YKj25v)

Thousands Of Bikers Drive To Home Of 6-Year-Old Diagnosed With Cancer
https://www.sunnyskyz.com/good-news