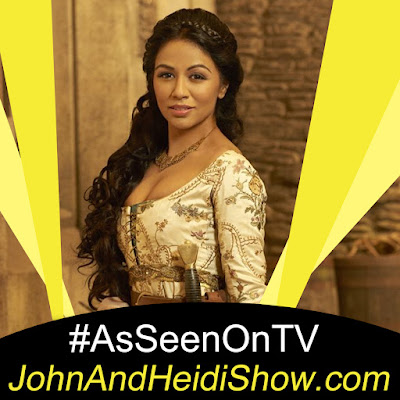 The sixth season ended with a bang — literally, as Teddy brought about his vision of “The End” when he detonated nuclear warheads across the Texas landscape. Now the survivors will decide what “The Beginning” will look like, adapting to a deadly new environment where the air they breathe is as deadly as the walkers they encounter.

A new poll from Figo Pet Insurance found that 3 in 5 people consider their pet to be their soulmate. (https://bit.ly/3FuID3v)

A new study found that "forest bathing" will improve your mood and positivity, and decrease your anxiety. (https://bit.ly/3BuSRyi)

A Fort Myers man was sentenced to 22 years and six months in federal prison Monday after he was accused of having illegal drugs mailed to his home. 32-year-old Bradleigh Carter pled guilty to multiple charges in October after he allegedly tried to have about a pound of methamphetamine shipped to his Fort Myers home. Investigators said Carter, a previously convicted felon, knowingly attempted to ship the package via the United States Postal Service (USPS) by priority mail. A search of the 32-year-old’s home uncovered more illegal drugs including methamphetamine, fentanyl, and cocaine. Several firearms and ammunition were also found at Carter’s home. Carter plead guilty to charges including attempted possession with intent to distribute 50 grams of methamphetamine and for possession of a firearm in furtherance of a drug trafficking crime. The 32-year-old was also ordered to give up his guns and ammunition related to this crime, investigators said. The case was investigated by the United States Postal Inspection Service with assistance from the Bureau of Alcohol, Tobacco, Firearms and Explosives, the Drug Enforcement Administration (DEA), and the Lee County Sheriff’s Office. (https://bit.ly/3laDAgg)

Actor George Clooney says he won't let his wife, Amal, watch the infamous 1997 “Batman & Robin” because he wants her to have some “respect” for him. (https://bit.ly/3iFd5On)

Rapper and actor Ludacris has joined his “Fast & Furious” co-stars in supporting the idea of Paul Walker's daughter joining the blockbuster franchise. (https://bit.ly/3uPBEgs)

Kim Kardashian made jokes about her sisters, her sex tape, and OJ Simpson during her hosting stint on Saturday Night Live. (https://bit.ly/3mFOLgv)

The New York Times was forced to make an embarrassing correction after reporting that 900,000 children have been hospitalized with Covid when the true figure was actually 63,000. (https://bit.ly/3DneiBK)

In the UK a man came home to find a burglar in his favorite reclining chair. But he didn’t have to worry about the crook harming him — he was passed out drunk. Seems the intruder put down his stolen merchandise and enjoyed a bit of brandy and then fell asleep.

Police say cocaine users are now stealing meat and using it to pay for drugs. (https://bit.ly/3uYp0fi)

In Hungary a man escaped from prison, where he must have been really lonely. One of the first things he did after breaking out was to post an ad with his name and picture on an online dating sites. He didn’t exactly make the love connection he was hoping for. The cops recognized him and set up a date at a local pastry shop where he was arrested.

With 46 arrests for retail theft this year alone, this Man of Steal leads NYC’s record-shattering shoplifting surge. Were he the supervillain in a heist movie, 22-year-old Isaac Rodriguez would be called Sir Isaac Lootin.’ But the real-life, allegedly violent bandit has no moniker — just a rap sheet 74 offenses long, dating back to 2015. The King of Queens Thieves has been arrested 57 times this year alone, including in a vicious stabbing. Rodriguez is finally in jail, but he rode the city’s revolving door of justice to allegedly rip off Walgreens 37 times this year. He was particularly partial to the drug store at 91-08 Roosevelt Ave. in Jackson Heights, which he hit 23 times. Police say that he steals anything from protein drinks and body lotion, to baby formula and sexy lingerie. He likes Dove soap and Victoria’s Secret merchandise too, according to court records. Rodriguez’ M.O. is not sophisticated. He doesn’t use fake bellies or false-bottom boxes favored by professional shoplifters. He simply enters the store and helps himself — filling a bag with items he plucks from shelves, and then walks out without paying, according to store employees and law enforcers. He’s a one-man crime wave in a city that is being taken over by thieves, said an exasperated law enforcer. In addition to his 37 Walgreens strikes, he’s hit local Victoria’s Secret stores four times, Rite Aid (3), Target (3), CVS (2), Family Dollar (1) and Macy’s (1), police said. He’s alleged thievery, which includes 42 counts of petit larceny and three for grand larceny (over $1,000 in value), escalated to violence. (https://bit.ly/3B6jUj3)

A Florida Woman is behind bars for allegedly striking her boyfriend in the head with a sauce pan “containing freshly cooked grits.” Investigators say 49-year-old Dereise Johnson and the victim were arguing yesterday morning when she struck the man with a metal sauce pan inside the couple’s St. Petersburg residence. “Contained within this pan was hot grits which spilled on the victim, causing a burn to his left arm,” a cop reported. The victim also required stitches for injuries to his head and face. Johnson was arrested and booked into the county jail for aggravated battery. She is being held in lieu of $5,000 bond and has been ordered by a judge to have no contact with the victim. Johnson’s rap sheet includes five separate battery convictions--both felony and misdemeanor counts--dating back to 2000. Her most recent conviction came in 2017 when she was sentenced to 90 days in jail for battery on a person over the age of 65. In that case, the victim was Johnson’s aunt, who suffered an eye injury and a bloody nose and lip after being struck in the face by her niece.(https://bit.ly/3itT0ud)