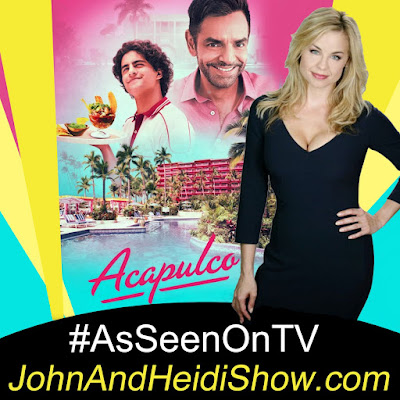 Today we visit with Jessica Collins, you know her as Avery Bailey Clark' on "The Young and the Restless”. Her feature film credits include “Catch Me If You Can” and “Beautiful”.

Collins stars in the new AppleTV+ comedy series “Acapulco.” The first few episodes have been out since October 8th now there adding new episodes weekly. Collins plays ‘Diane,’ the joyful and feisty new owner of the hottest resort in Acapulco in 1984. The series shifts between 1984 and current day where we find Eugenio Derbez narrating the stories of working as a young man at the resort in the 1980’s. The series is based on and inspired by his 2017 hit film “How To Be A Latin Lover.”

A new survey finds over 70 percent of us aren’t interested in an after-hours holiday gathering this year.

A Pennsylvania mom admitted giving her teen daughter psychedelic mushrooms and marijuana during a “bonding experience.” 42-year-old Brandy Lee Betz was charged with felony child endangerment after she was reported to cops in June regarding her drug use earlier this year with her 14-year-old daughter. The referral indicated Betz gave the teen “shrooms” and marijuana while in her Middletown home. Dauphin County child welfare officials conducted a parallel probe and Betz confessed to smoking pot with the girl. A witness also told cops Betz went to their home and bragged about the “bonding experience” she had with her daughter, saying they had taken mushrooms and smoked pot together. Investigators met with the teen Tuesday and she confirmed that Betz had given her both drugs and that they took them while together. Betz also told investigators she didn’t want custody of her daughter, Tankersley wrote, but then decided she no longer wanted to discuss the matter with cops. She was later charged with felony child endangerment and misdemeanor corruption of minors after consultation with prosecutors. Betz, who was arrested Tuesday, was released from custody on $10,000 unsecured bail. (https://bit.ly/3lzXkdy)

Serious football fans have been presented with a rather unique encouragement to buy a house: a dinner date with NFL Hall of Famer, longtime Dallas Cowboys player and Dancing with the Stars season-three winner, Emmitt Smith! And he has priced his home in honor of his former Cowboys # 22, listed at $2.2 million. In addition to dinner, the buyer of this Dallas home, built for Smith in 1995, will own a 10,806-square-foot home next door to a large wooded park and lake with private access. There are five bedrooms, nine baths. For potential buyers who admire Emmitt’s furnishings as well as the house, they’re negotiable. For more celebrity home news and home video tours, visit TopTenRealEstateDeals.com

A Palo Alto woman was charged with arson for setting one of California's wildfires. Cops believe the arsonist may have had help from her boyfriend too. https://bit.ly/3i9fyQX

A Staten Island dad was busted for secretly filming nude videos of his live-in nanny. (https://bit.ly/3zNmc5b)

A Scottish woman was "mortified" when five concerned police officers turned up at her door because of a report of screaming. Hollie Hunter said she freaked out so badly when she saw a "massive spider" in her bedroom that a neighbor rang the police. When cops arrived they found that the 30-year-old woman was not being attacked but needed help with an eight-legged intruder. Officers found the spider underneath her mattress and removed it, but "not without laughing" at her. In a post on Facebook, Hunter said she had "never been so mortified" adding that "it’s time to seek help for my phobias".

A lost dog in England was reunited with his owner after climbing aboard a city bus, where passengers soon realized the canine was riding solo. Passengers said the dog followed a human passenger onto the vehicle, and it was a short time later when they discovered the human was not accompanying the canine. Concerned riders posted pictures of the dog to social media, and an administrator on the "Plymouth (UK) pets lost & found" group later confirmed the dog had been reunited with his family. Bus managers shared the story of the dog, named Patch, on its Facebook page.

I’m sure we have all had sore throats that feel like we swallowed a cactus. But can you imagine what it would feel like to have a 1.5-inch nail lodged in your esophagus? This is what a seven-year-old Istanbul, Turkey, girl had experienced when doctors discovered a large nail in her neck as doctors prepared to remove her tonsils. The girl reportedly began complaining of sharp throat pains around the age of two. Doctors believe that is when she swallowed the nail.

An artist in Argentina used bombs to blow up his paintings, so that they only exist as Digital NFT's. (https://bit.ly/3mxszFj)

First dates can be awkward, but a woman on TikTok shared a unique horror story that has since gone viral. Elyse Myers starts off by explaining that before meeting her husband, she had used dating apps to meet people. The story begins with this particular man inviting her out to dinner. They planned to meet first at his place. When Myers arrived, her date said he'd lost his keys and asked her to drive. He gave her directions and they ended up at a Taco Bell – in the drive-thru lane. It gets worse. He then ordered 100 hard-shell tacos. Moments later, the man told his date he couldn't find his wallet. Myers says she agreed to pay, and they returned to his house only to eat the tacos at his kitchen table in silence. The man’s father briefly joined them before Myers decided the date was over. She took the remaining tacos with her. The video, uploaded earlier this week, has been viewed over 12.3 million times. In a follow-up video, Myers confirmed that the tacos cost about $150. AND while they waited 15 minutes for the order, the guy spent the entire time talking about his ex-girlfriend. (https://fxn.ws/3AqALfC)

A Huntingdon County man was arrested for burglary after he broke into a home and stole a bottle of Mtn Dew. Matthew Lane, 34, is facing felony burglary charges after breaking into the home on Thursday afternoon. Police were called just after 3 p.m. Oct. 7 when the victim told police that Lane entered his home without permission and took a bottle of Mtn Dew from the fridge. Lane was arrested for burglary and was placed in Huntingdon County Prison on $75,000 bail. A preliminary hearing is scheduled for Oct. 20. (https://bit.ly/2WWvEpC)

If you have a favorite quote.... you can send it to us at Quotes@JohnAndHeidiShow.com

“Happiness is not the absence of problems, it’s the ability to deal with them.” — Steve Maraboli

Two Men Lost At Sea For 29 Days Say It 'Was A Nice Break From Everything'
https://www.sunnyskyz.com/good-news/