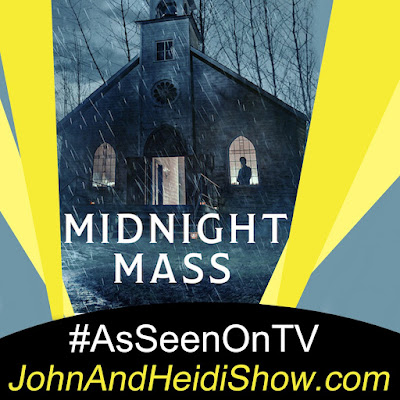 Today we visit with Kate Siegel (The Haunting of Hill House, The Haunting Of Bly Manor) Kate stars in the new Netflix series “Midnight Mass” opposite Zach Gilford and Hamish Linklater. This seven-episode series tells the tale of a small, isolated island community whose existing divisions are amplified by the return of a disgraced young man and the arrival of a charismatic priest.
https://www.youtube.com/watch?v=89UV8vmWXlY

A new survey found that 1 in 5 Americans started Christmas shopping last month. People actually think the early shopping has to do with the supply chain issues. (https://bit.ly/2XkfuGO)

While no country has a definite plan for a manned mission to Mars, some people think we’ve already been there. A survey found 7 percent of adults think man has already stepped foot on Mars.

The Lincoln Police Department says a man who huffed gasoline crashed into a home and caused the porch to collapse. On Sunday around 5:00 p.m., police officers were at a crash scene near 20th and A Streets when they requested assistance from Lincoln Fire and Rescue. According to police, a driver going down A Street crashed into a home which caused the porch to collapse. First responders said they worked to make contact with the homeowner and the driver of the car got out with no injuries. Police said the driver was huffing gas and then crashed into the house. According to police, the driver, a 20-year-old man, was cited and released for willful reckless driving and DUI.(https://bit.ly/3lC7hqX)

Halloween Kill's finished tops at the Box Office with a $50 million dollar take despite the fact it's also available On Demand. (https://bit.ly/3DOo0xj)

A stuntman was nearly killed during a rehearsal for "America's Got Talent" after two flying cars collided and exploded as he hung in between them in midair. (https://www.dailymail.co.uk/news/article-10100075/Terrifying-footage-moment-Jonathan-Goodwin-America-Got-Talent-stuntman-died-hit-cars.html)

Adele's comeback single broke the record for most streams in one day on Spotify. The song was streamed 24 million times in 24 hours. (https://bit.ly/3BP8fG0)

Motley Crue’s Vince Neil cracked his ribs after falling off the stage during a concert. (https://bit.ly/3BRSXQP)

Bill and Melinda Gates walked their daughter, Jennifer, down the aisle Saturday Night in her second wedding ceremony of the weekend. (https://bit.ly/30unG8B)

A Seattle Elementary School has banned its annual Halloween Celebration because the school board claims it's racist. The board claims that poor students can't afford a costume. (https://bit.ly/3vmdaeQ)

United Airlines was fined $1.9 million dollars for keeping passengers trapped on planes for hours, which is a violation of Federal Law. (https://bit.ly/3AEhlER)

The World's oldest drawing of a ghost was found inside the vault of a British Museum. They believe the ghost was drawn during this exact month of October 3,500 years ago. (https://bit.ly/3p8aL6H)

A 20-year-old man is accused of siphoning cooking oil from storage tanks at two Luzerne County restaurants into tanks hidden inside his van. Caraballo Matos was taken into custody at his home near Allentown and will soon be brought to Luzerne County to face felony charges. But why cooking oil? That’s still a bit of a mystery that police are trying to solve. According to reports, the theft of cooking oil is becoming more common. Restaurant owners recycle it to get paid by companies that refine it into fuel, but it’s unclear why it has been the subject of some recent thefts. “It goes a lot deeper than just a theft of cooking oil,” West Pittston police Chief Michael Turner said. Matos is accused of siphoning cooking oil from the American Grill in Exeter and the B3Q Smokehouse in West Pittston Wednesday into tanks in his van. Police say surveillance video showed him doing so at the West Pittston restaurant, then ramming his van into the owner’s vehicle, reports indicate. Investigators have not yet found the van, the stolen cooking oil or his suspected accomplice. According to reports, Matos is facing charges of burglary, criminal trespass, theft, receiving stolen property, simple assault, reckless endangering, criminal mischief, and traffic violations.(https://bit.ly/3lzdpAg)

The Lincoln Police Department arrested a man they say had a homemade explosive device in his pocket. On Friday around 8:30 p.m., police stopped a white 1999 Ford F-150. LPD said homeowners in the area had called to report the vehicle was seen driving erratically through the neighborhood. Police said the driver of the truck, 30-year-old Cody Ryan, was wanted for an outstanding felony warrant and was taken into custody. According to police, officers found an item in Ryan’s pocket that was identified by the fire inspector as an illegal explosive device. Police said the device was homemade and intended to explode upon impact with a hard surface. LPD said Ryan was also driving on a revoked license. He was arrested for his outstanding warrant, possession of a destructive device, and driving while revoked 2nd Offense. (https://bit.ly/3oVdkZN)

If you have a favorite quote.... you can send it to us at Quotes@JohnAndHeidiShow.com

An investment in knowledge always pays the best interest.—Benjamin Franklin