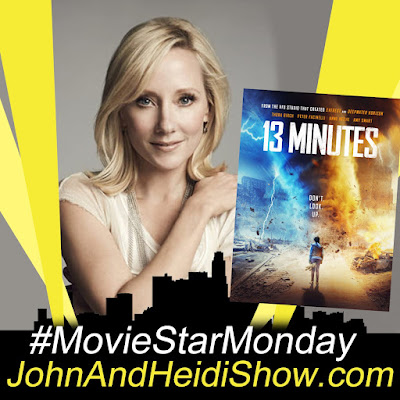 This #MovieStarMonday we visit with Anne Heche. We'll visit about her new film 13 Minutes. This is a TORNADO MOVIE, but there's a lot more going on! Also features Trace Adkins, Amy Smart and many more!

According to a new survey, the average American admits to using five different “cleaning shortcuts” while tidying up their home. The survey of 2,000 people delved into some of these dubious shortcuts and found the most common one to be misting the room with air freshener (40%) — instead of actually cleaning dirty or stinky surfaces. (https://bit.ly/3BRTQZu)

A new study shows the best way to stop an asteroid is to pulverize it. (https://bit.ly/3lUtT6d)

A man was arrested for scaring children at a library in Naples while drunk. Officers with the Naples Police Department arrested 38-year-old, Joshua Daniel Moss, at Naples Regional Library on Monday evening. The manager of the library told officers that Moss was causing a major disturbance and was staring at children that were in daycare. When officers arrived at the scene, Moss was howling at the computer, making loud noises, and they noticed a strong smell of alcohol on his breath. Moss was arrested for disorderly intoxication. He was taken to Naples Jail center for further processing. (https://bit.ly/3BFDeUH)

Robert Pattinson says the new Batman he portrays is going through an identity crisis. (https://bit.ly/3AMI4yd)

A trailer for the new Batman movie starring Robert Pattinson has been released. (https://cnet.co/3piq78M)

A new report claims that Netflix's Squid Game is worth $900 million. (https://cnb.cx/3AQzpL5)

A Phish fan has died after falling from the upper-level of the band's concert in San Francisco. (https://fxn.ws/2Z87t8Q)

According to a data visualization account on Instagram, ticket prices for Walt Disney World have risen more than rent and gas costs since the 1970s. (https://bit.ly/3BWp6Xw)

A Los Angeles Realtor is advertising homes by posting full frontal nude photos of himself inside them. (https://bit.ly/3jdLSm8)

Coldplay says their upcoming eco-friendly concert will be powered by electricity generated from the movement of their fans dancing to their music. (https://bit.ly/3DOXFPK)

Stallions and bulls don’t have nipples.

A former Australian soldier accused of storming an animal shelter to retrieve his cat pleaded guilty this week to charges from the offense. (https://fxn.ws/3DKzrpZ)

A Florida man is facing charges after he allegedly locked his neighbor and his neighbor’s 5-year-old daughter in a tennis facility at an apartment complex in Kendall. Deputies said the man was upset after seeing a father watching over his 5-year-old daughter while she was riding a scooter on the tennis courts. 63-year-old James Olsen is now facing charges of false imprisonment after allegedly telling the father-daughter duo that scooter riding was not allowed there before locking them in. According to the Miami-Dade Police Department, the victim refused to leave saying he wasn’t breaking any rules before Olsen responded by using a padlock to lock the two inside. Olsen allegedly said he was the president of the building which investigators quickly determined was not true after speaking to a security guard. NBC News reports Olsen was once the president but is not anymore. However, the 63-year-old still had the keys to the tennis court. A security guard let the dad and daughter out of the tennis courts before the victim called the police. He’s facing two charges including false imprisonment and false imprisonment of a child under age 13.(https://bit.ly/2YJwver)

A police force in Ontario has released 9-1-1 audio after a man called the emergency line to report he had to go pee while stuck in traffic. Peel Regional Police released the audio on Friday to remind people about the proper uses of dialing 9-1-1. When the 38-second call begins, the operator asks the man if he needs police, fire or ambulance. He first says he needs an ambulance, but then tells the operator he actually needs police. "The thing is I have to pee and these guys are not moving," the caller tells the operator. "This is your emergency?" the operator responds. "That you have to pee? And how are the police going to help you urinate?" The caller then repeats to the operator that he has to pee. "I have to pee, man," the caller says. "I'm not sure what you'd like me to do if you have to urinate, I can't help you with that," the operator says before disconnecting the call. Peel police said Friday that needing to use the bathroom and the car ahead of you isn't moving fast enough is "not for 9-1-1." The public being reminded that misusing 9-1-1 can potentially prevent someone with a life-threatening emergency from getting help on time. (https://bit.ly/3arHvz7)

Your future is created by what you do today, not tomorrow. —Unknown