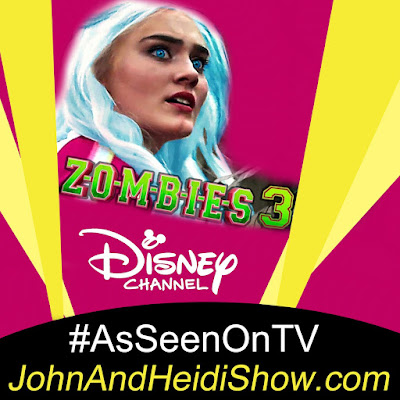 Today we visit with Meg Donnelly. She portrayed Ash in the Netflix comedy series Team Toon, Taylor Otto in the ABC sitcom American Housewife, and Addison in the 2018 Disney Channel Original Movie Zombies and its 2020 sequel, Zombies 2. Now Zombies 3 slated for release 2022.

A study from Cedars Sinai Medical Center found that "broken heart syndrome" is becoming more common in women. The researchers say having a broken heart will cause stress that could actually be damaging to your heart long term. (https://bit.ly/3DSd2Xw)

A survey of adults finds eight in ten feel dancing boosts their mood, with three quarters feeling “happy” after shimmying around their home.

More than 5 tons of cocaine worth an estimated $232 million was seized off a 79-foot yacht by Portuguese authorities in the Atlantic Ocean on Sunday. Portuguese authorities said the drug bust was one of the biggest in Europe in recent years — and the nation’s biggest in 15 years. The sailing yacht was bordered by police with the help of the Portuguese navy and air force, and 183 bales of cocaine were discovered. Three men were arrested, whom authorities believe to be a part of a major international drug pipeline between Latin America and Europe, entering through the continent through the Iberian Peninsula. Two of the suspects detained were Spanish and one was Peruvian. The operation, dubbed “White Tide,” involved police from Portugal, Spain, the US Drug Enforcement Administration and the United Kingdom’s National Crime Agency. “We are always expecting [more drug trafficking] and this is the message we want to send organizations: We are waiting for you,” Portugal’s Judiciary Police Chief Luis Neves said at a press conference Monday, according to Reuters. “Those who have to fall will fall because this amount of drugs is an immense fortune and a huge blow for criminal groups.” (https://bit.ly/3lUD9XI)

Kanye West’s first home in the Hollywood Hills, where he lived for almost 15 years, is for sale at $3.699 million. Its clean and sophisticated architecture and jetliner views are the vibes that seem to be abundant in Kanye’s style. It was in 2003 that Kanye West emerged as both a solo rap artist and producer and began to chart both simultaneously. It was also the year Kanye bought his charming bachelor pad for $1.75 million. (He recently purchased a $57 million Malibu Beach home) For more celebrity home news and home video tours, visit TopTenRealEstateDeals.com

Before you pick up the phone to glance at that text message you just got while you’re driving, consider this: researchers say the average time a driver’s eyes are off the road when focused on sending or receiving a text is 4.6 seconds.

An upstate New Yorker bearing an uncanny resemblance to Brian Laundrie had a rude awakening when U.S. Marshals on the hunt for the fugitive pulled their guns on him during a nap on the Appalachian Trail. The man was quickly cleared because he didn’t have Laundrie’s telltale tattoos and he produced an ID that ruled him out as the wanted man. (https://bit.ly/3lOWFVJ)

In Japan a guy was looking for help in pulling off a big burglary. So he posted a help wanted ad online. He hired one of the would-be crooks who applied and together they did pull off the robbery, getting away with a bunch of money. But the Internet robber just didn’t have what it takes. A short time later he turned himself in and gave up his partner, who was also arrested.

An 85-year-old man in Germany was driving his farm tractor around town and collided with a streetcar. The man cursed the streetcar driver and then took off, leading police on a 10-minute chase — at 3½ miles per hour.

Frogs don’t drink. Anything. (They absorb water through their skin.)

Russian state media is accusing CNBC’s Hadley Gamble of acting “as a sex object” to distract President Vladimir Putin — even suggesting the veteran journalist is part of a US “special operation.” The 69-year-old Russian leader was caught on camera making flirty faces with her before they went onstage. (https://bit.ly/3lVKqXr)

A Florida man accused of shooting down a law enforcement drone in July was indicted Wednesday on charges of possessing a firearm as a convicted felon and destruction of aircraft. 51-year-old Wendell Doyle Goney was formally charged after he allegedly admitted to shooting a Lake County Sheriff’s Office drone out of the sky with a .22 caliber rifle, according to a news release from the Department of Justice. Goney told deputies that drones had been "harassing" him. On July 11, 2021, deputies from the Lake County Sheriff’s Office responded to a burglary on a 10-acre property in Mount Dora, about 30 miles northwest of Orlando. The deputies deployed a drone to assist with an outdoor search, only to have it destroyed by gunfire that came from a nearby residence. After deputies confronted Goney, he allegedly admitted to shooting down the drone, while adding that he was not legally allowed to possess a gun as a convicted felon. Goney has 29 prior felony convictions in the state. He faces up to 30 years in federal prison if convicted on both counts. (https://fxn.ws/3AKU6Im)

A Pennsylvania elementary school teacher has been arrested after allegedly threatening to shoot district officials because janitors removed a plastic barrier he set up in his classroom to protect against the spread of COVID-19. Chad Gerrick, an educator at Sinking Springs Elementary School in York, is now charged with one misdemeanor count of terroristic threats. Last Friday, a cafeteria worker said she heard Gerrick threaten to “shoot all them f—–s” at the district’s administrative offices, the station reported. Gerrick also said if he contracted coronavirus, he would “come to school and spread COVID to everyone I can,” the police document added. Police told Fox43 that the 50-year-old teacher was upset following a conversation he had with administrators over the removal of the plastic barrier he erected in his classroom. Gerrick was suspended by the school pending an investigation and detectives who searched his Manchester Township home seized two long guns and a handgun. (https://bit.ly/3BLqXhu)

The minute you get away from fundamentals – proper technique, work ethic or mental prep – the bottom can fall out of your game. —Michael Jordan

'What Happened To All The Gratitude?' Couple Donates 322 Gift Cards To Local Hospital https://www.sunnyskyz.com/good-news