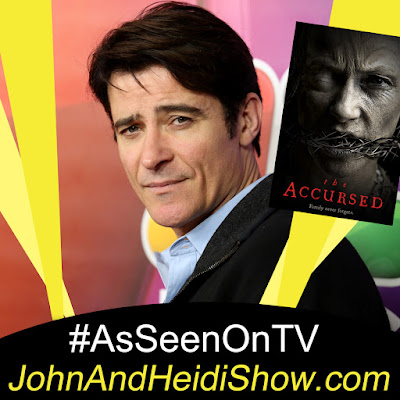 Goran Visnjic (ER, Timeless & many More) about his new movie The Accursed

A recent study finds that the “feel-good” hormone in the brain known as dopamine impacts a wide range of behaviors, including the passionate drive some men have to succeed. The hormone is also known for stimulating feelings of happiness and joy. (https://bit.ly/3niHoNu)

A new study finds that little kids can read the emotions of adults who wear masks. (https://cnn.it/3Fm0OY3)

An Alabama man is charged with breaking into a county jail to make a delivery of cigarettes, marijuana, cellphones, and chargers. Pike County Sheriff Russell Thomas tells a local news outlet that workers using a security monitoring system saw a man coming through the fence surrounding the jail about 2:00 a.m. Monday. Nineteen-year-old Jadakis McKinney of Enterprise was arrested and charged with criminal trespassing, promoting prison contraband, and marijuana possession. Thomas says officials hope to reduce the amount of illegal items being brought into the lockup, which will be replaced with a new jail set to open in late 2023. (https://bit.ly/3H5F7gM)

Halle Berry says she would like to take another stab at “Catwoman” in the director's chair this time. Her “Catwoman” was a notorious flop, raking in $20 million less than its production budget in the worldwide box office, getting nominated for 7 Razzie Awards, winning 4 including Worst Picture, and landing on Roger Ebert's list of his most hated films. (https://bit.ly/3qIkH7P)

Kourtney Kardashian could be seen straddling fiancé Travis Barker at a friend’s wedding in footage circulated on social media. The eldest Kardashian sister was grinding on the Blink-182 drummer at the reception while his band’s pop-punk classic “All the Small Things” blared on the speakers. (https://pge.sx/3DogcTq)

A pair of diamond bracelets that once belonged to Marie Antoinette have sold at auction for over $8 million. (https://cnn.it/3nol31j)

Sam Adams is selling a beer made from ingredients that have traveled to space. The new Sam Adams Space Craft IPA, is made from Hops that have orbited the earth. Sam Adams says the resulting beer has tropical notes of grapefruit, guava, and passionfruit. (https://bit.ly/3ceTvF3)

Venezuela has set out to break the World Record for the largest orchestra ever. (https://bit.ly/3DoCX9G)

China has confined nearly 1,500 university students to their dormitories and hotels following an outbreak of COVID-19 in the northeastern city of Dalian. The order was issued after several dozen cases were reported at Zhuanghe University City and hundreds of students were transferred to hotels for observation. (https://fxn.ws/3Ht5Eo6)

Some cats are actually allergic to humans.

The Queen of England sprained her back and did not attend the Remembrance Sunday event.(https://bit.ly/3DhgtaA)

A man is wanted after he beat a seagull with a shovel on the beach in Marco Island, Florida. According to Wink News, the graphic attack was witnessed by fellow beachgoers. A picture of the man holding a beach chair, wearing light green shorts, a straw hat with shades on the top was captured. Marcos Island Police Department are asking to contact them if anyone can help to identify the suspect. After the bloody attack on the Laughing Gull, a Florida Fish and Wildlife Conservation Commission (FWC) officer brought it to the Von Arx Wildlife Hospital in Naples, FL. Joanna Fitzgerald, who is the Director at the Wildlife Hospital says the seagull had a number of injuries. FWC suggests to put away any food or keep food to yourself when seagulls are around because they can detect food from miles away. (https://fxn.ws/3n0Ni5J)

Des Moines police said they may know how an apartment fire started early Monday morning. According to police, the fire started inside of an apartment at Gray's Lake Apartments when an occupant "attempted to light a bug on fire on a futon." According to police, It "lit up like a tinderbox." Several people have been displaced after the fire. Emergency crews had to block off part of that main road while they battled the flames. Shelby Spieker was allowed to go back up to her apartment around 3:30 a.m. to get some things but when she walked in, she was devastated. Ash was everywhere, her ceiling had fallen in and everything was soaked in water. "It looks like a teddy bear stuffing factory exploded everywhere and then they soaked it in an Olympic sized pool. I don't know, it's so bad," Spieker said. No one was injured in the fire, but smoke filled the entire building, so even though only four apartments had any damage, they are taking extra precautions and evacuating three other units because of all the smoke that filled the building. The fire started about midnight. That's when Spieker got the call at work that her home was on fire. Police are still investigating the incident. (https://bit.ly/3EY97Jj)