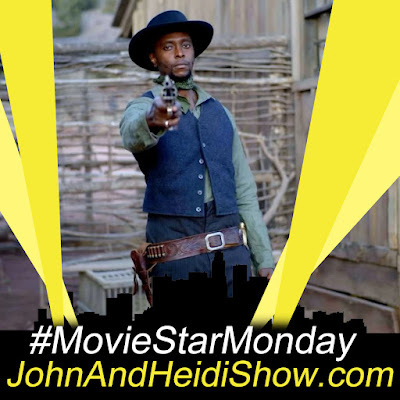 This #MovieStarMonday we visit Edi Gathegi. Edi is well known from his role as the vampire ‘Laurent’ in the Twilight film franchise in addition to Armando Munos/Darwin in The X-Men: First Class, and recently starred in (and Executive Produced) the thriller film Caged, opposite Angela Sarafyan and Melora Hardin, as well as in the indie film Princess of the Row.

Has appeared in other series including The Blacklist, Phineas and Ferb, CSI, CSI: Miami, Veronica Mars (original series), and House.

Here’s a link to the newly released trailer.
https://www.youtube.com/watch?v=Poc55U2RPMw

Research out of the UK confirms one flush of the toilet produces thousands of tiny aerosol droplets, which can contain bacteria and viruses and contaminate surfaces up to six feet away. In face toilet bowl water remains contaminated for several flushes after becoming exposed to harmful pathogens. So, yeah, if you need to flush two or three times after taking care of “the things,” you’re simply adding to the problem. By the way, the study also found that 55 percent of adults never put the lid down before flushing. The top reason for leaving it up: people were unaware of the risks of not closing it. A close second: people were afraid to touch the lid.

A man who was riding around with a monstrous clown mannequin is facing a diverse series of charges, after deputies also found drugs and a live grenade in his pickup, according to the Flagler County Sheriff’s Office. The traffic stop happened Monday on a dirt road in Bunnell, a small town northwest of Daytona Beach, officials said in a release. Video shows the clown mannequin sat impassively in the passenger seat as driver Louis Branson, 65, responded to deputies’ questions about why he was driving with a license that expired in 2019. His truck tags were also expired, officials said. However, deputies became suspicious and placed him under arrest. It was during a search of his tool box that one deputy found a sealed can with a grenade tucked inside.(http://hrld.us/3GuIbT6)


A team of scientists have discovered a neuron in our brains that specifically activates when we see photos of Jennifer Aniston. (https://bit.ly/3mkgZyu)

Angelina Jolie avoided answering a question about the nature of her relationship with The Weeknd while promoting her latest movie, “Eternals.” The “Maleficent” star, 46, and The Weeknd, 31, have been spotted out on multiple dinner dates in Los Angeles in recent months, sparking rumors that the pair are romantically involved. (https://pge.sx/3GodL5b)

Outraged Howard University undergraduate students claim they are being forced to live in deplorable housing conditions – with rats, cockroaches, mold, and mushrooms plaguing their dorm rooms. More than 100 students at the college in Washington D.C. have been staging a two-week protest over their living conditions after accusing university administrators of ignoring their complaints. (https://bit.ly/3jATK1d)

St. Louis Mayor Tishaura Jones didn't flinch when gunfire rang out during her anti-gun speech on Friday. The Mayor says she didn't flinch because she hears the lullaby of gunfire on a nightly basis. (https://bit.ly/3CLVPzf)

A high school principal in Kentucky is being investigated from receiving a lap dance from a teen boy student during a homecoming event. https://bit.ly/3BsAc5g

North Koreans are being asked to eat less food as the communist nation deals with a food emergency that is expected to continue at least until 2025. A shortage of food in the nation has resulted from a shutdown of its border with China, an action that was taken in 2020 in a bid to slow the spread of the coronavirus. (https://fxn.ws/3Gwso6b)

lika Suliafu, 30, was arrested following the October 21 incident in Bountiful, Utah. According to an arrest report, Suliafu's father returned home that day with an order of chicken wings for his son. "When (Suliafu) discovered the wings were not the variety he liked, he became upset and began to argue," an officer wrote in a probable cause statement. The dispute escalated, Suliafu went into his bedroom and returned with a gun and, despite his father's pleas, he opened fire, police said. The father was able to dodge the bullet, which traveled through the walls of their apartment and eventually became lodged in a neighbor's dishwasher, police added. The father then went for his son's legs, attempting to wrestle the gun away from him, and amid the tussle, Suliafu shot off two more rounds that became lodged in the ceiling, police said. The father was finally able to snatch the weapon away and unload it while fleeing, police added. By the time officers arrived from the Bountiful Police Department, Suliafu was gone. Officers did, however, determine that his father's injuries were consistent with his description of the incident. Suliafu was later apprehended and taken into police custody. He is being held in Davis County Jail without bond.

A Pennsylvania woman is facing a criminal charge after allegedly striking another woman in the back of the head witth a "cold chicken" at a Walmart Supercenter, according to police and court records. Police say that Tahonee Fickes, 20, earlier this month “threw a cold chicken” at Kimberly Pittman, 52, while the women were inside a Walmart in Chambersburg, a central Pennsylvania borough about 15 miles from the Maryland state line. The chicken “struck [Pittman] in the back of her head,” according to reports. It is unclear what prompted the alleged poultry attack, or if Pittman was injured during the October 7 incident. Fickes and Pittman are not related. Police and court records do not indicate whether either woman works at Walmart. Fickes last year was convicted for passing a forged check and placed on probation for nine months and ordered to perform 50 hours of community service. She was arrested last month on a child endangerment charge, for which she is scheduled to be arraigned on November 29.

Always forgive your enemies. Nothing annoys them more. - Oscar Wilde

'You Are The Best Part Of My Day!' Girl With Special Needs Forms Friendship With Sanitation Worker https://www.sunnyskyz.com/good-news