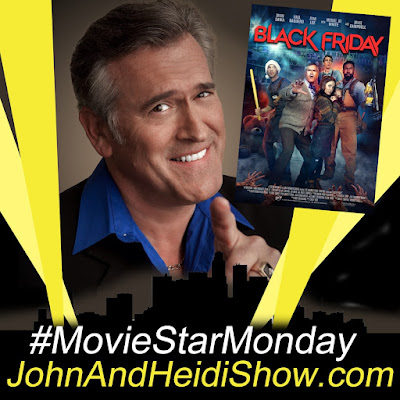 This #MovieStarMonday we visit with Bruce Campbell about his new film Black Friday. https://www.youtube.com/watch?v=M3H5Ye2BvUk

A new survey found that a record number of Americans under the age of 25 are not having sex because the pandemic has killed social drinking. (https://www.dailymail.co.uk/news/article-10199933/Record-number-young-Americans-report-not-having-sex-2021-phenomenon-described-sex-recession.html)

A new study found that 3 in 5 Americans are banning unvaccinated relatives from family gatherings this Christmas. (https://bit.ly/3FgynLe)

The average person loses the ‘excitement’ of Christmas by the age of just 23, according to research. A study of 2,000 adults found that before they even reach their mid-twenties, 23 percent no longer get excited on Christmas morning while 12 percent are sick of the festivities by advent. And 14 percent feel that December 25th is just like a normal day for them.

A 24-year-old Georgia man faces gun and drug charges after he allegedly sold 25 guns and cocaine to an undercover officer in New York, according to the U.S. Drug Enforcement Administration. Yamil Torres-Rincon of Atlanta, who was taken into custody on Friday night in New York, was arraigned Saturday on multiple counts of criminal sale of a firearm and remains held on $325,000 bond or $150,000 cash bail, the DEA said. The gun sales allegedly happened between Sept. 3 and Nov. 12 in Manhattan, the DEA said in its release. Before each sale, Torres-Rincon reportedly traveled from Georgia to New York City and often drove with guns concealed inside a hidden compartment in his car, the DEA said. Torres-Rincon charged $42,900 for 20 handguns and three assault weapons that were sold on the first three dates, according to the DEA release. Twenty handguns, including pistols and revolvers, and five assault weapons were seized, the DEA said in its release. Some guns allegedly were stolen, according to the New York Police Department. An undercover officer bought cocaine on one occasion, and the monthlong wiretap investigation revealed Torres-Rincon allegedly negotiated larger narcotics deals, the DEA said. (https://bit.ly/3DnClBh)

Dave Chappelle’s Washington, DC high school is delaying a fundraiser event that the funnyman was supposed to attend after students threatened to walk out. Duke Ellington School of the Arts initially said it would cancel the November 23rd fundraiser due to the student backlash, but after media scrutiny, the school said it would instead delay the event until April 22nd. (https://bit.ly/3Clu8vK)

Paris Hilton hosted a post-wedding carnival which was deejayed by Diplo. Paris dressed as a Barbie Doll for the event which is timely because Barbie is in the headlines this week. Apparently, the new Barbie doesn't come with a Dream Corvette anymore. (https://pge.sx/3HnWsld)

How often do you scurryfunge? Scurryfunge is an old, old word that means “to hastily tidy a house.”

In Scotland, a rookie bus driver got lost on the second day driving his route and got his vehicle stuck in a narrow lane. In trying to get out, he hit parked cars, knocked down garden fences and smacked a lamppost.

A Russian couple had a narrow escape when their naked neighbor dropped in. The neighbor had been relaxing in her bathtub when the floor gave way, dropping her and the bathtub into the apartment below. The woman, her bathtub and gallons of water landed in the middle of her neighbors’ living room.

We know tea is good for us. But how much? Three to five cups of tea a day is the sweet spot, according to Dutch guidelines. The Health Council of the Netherlands says tea reduces blood pressure, along with diabetes and stroke risk. Green and black teas are recommended, with herbal teas not showing the same benefits.

Stop signs used to be yellow.

A couple in New Zealand has discovered a 17-pound potato. It’s now considered the largest potato ever recorded. (https://bit.ly/3CZu46d)

A British model claims she’s been evicted from her seaside beach hut because neighbors are “jealous” of how glamorous she is. Michele Spicer purchased the private shed-like structure in English seaside town Goring-by-Sea for $20,000 last year as a “safe haven” after her divorce. But the mom of two told the Daily Star that her life is now “ruined” because she has been booted from the dwelling. Government officials say Spicer was evicted due to “the number of complaints received from local residents.” But Spicer — who did not reveal her age — says it’s simply a “conspiracy” among “bullying” locals trying to ruin her “mermaid haven.” “I think it’s because they’re jealous of me because I’m a model and I’m very glamorous with a sports car,” Spicer stated. “I’m just a normal beach hut owner … I’ve done nothing wrong.” Spicer is now taking legal action against government officials. The model claims the hut is worth upward of $47,000 due to extensive renovations she did on it prior to her eviction. “I wanted the hut to improve my mental health but it’s just been 18 months of total misery. The hut is my life and my little haven — and I just want it back where it belongs,” she claimed. (https://bit.ly/3FcLYTT)

Justice was not blind when a lawyer dropped his pants after repeatedly setting off a metal detector at a Pittsburgh courthouse. 59-year-old Jeffrey Pollock was trying to pass through security outside family court on Wednesday, but the machine kept sounding an alarm. The lawyer told guards his suspenders were causing the alerts and he could not remove them. The guards asked him to keep trying until the alerts stopped. “After a heated discussion with the guards, Pollock unhooked his suspenders, dropped his drawers, took them off, and placed them in the bin to go through the metal detector,” the Allegheny Sheriff’s Office said in a news release. Authorities said Pollock stood in his shirt and underwear. He was charged with disorderly conduct. “I used poor judgment,” Pollock told the Pittsburgh Tribune-Review. “I was trying to make a point.” The sheriff’s office noted “that visible underwear is not part of the dress code.” (https://bit.ly/3HkKCbq)

“Build your own dreams, or someone else will hire you to build theirs” - Farrah Gray

Boy Uses 'Make-A-Wish' Grant To Feed The Homeless For A Year
https://www.sunnyskyz.com/good-news