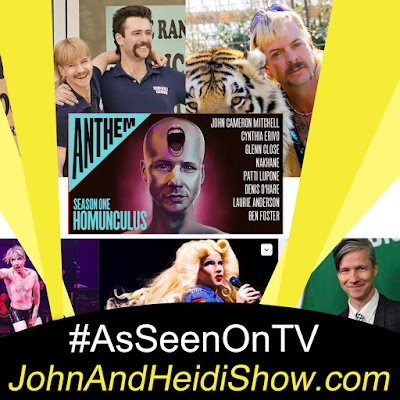 This weekend we visit with John Cameron Mitchell, star and co-creater of Hedwig and the Angry Inch.

Next year he appears as the title character in Joe Exotic, Peacock Channel’s limited series (opposite Kate McKinnon), as well as Hal in Netflix's Sandman.
https://www.eonline.com/news/1181906/the-joe-exotic-miniseries

Is there a smell that we can all agree is just horrible? Yes. A British survey found the smell of a wet dog is something we can do without. Wet dog beat out “cheesy socks” as the top stink. The survey (by Febreze) also discovered that we all LOVE the smell of baked bread fresh out of the oven. Men ranked “cooked bacon” high on their list while women prefer the sniff of newly washed sheets.

Samuel Adams is giving us all an out-of-this-world beer. And they mean that literally. In late October, the craft beer company announced that it's launching Space Craft, a beer brewed from 66 pounds of hops that traveled more than 300 miles above Earth. So, what does a space beer taste like? Samuel Adams explained in a press release, the brew comes with "a firm bitterness and tropical notes of grapefruit, guava, and passionfruit." As for how the beer got its name, the company explained that it turned to fans on social media to help come up with a moniker appropriate for a beer with "cosmic proportions." The new Samuel Adams Space Craft beer will only be available in select markets starting Tuesday, Nov. 16. Interested in getting yourself some? You can order it from here! (https://bit.ly/3CGpx8v)

Jennifer Lopez and Ben Affleck were spotted making out on a tarmac in Los Angeles before she boarded a private jet. (https://pge.sx/31B85Vj)

Hilaria Baldwin has shared a video montage of her family's trip to Vermont on Instagram. Hilaria says she wants to give her fans an honest portrayal of how the family is getting through this difficult time. (https://www.dailymail.co.uk/)

The city of Christchurch, New Zealand has voted to take the town Wizard off its payroll. (https://nyti.ms/3pD0S10)

A word can tell you a lot about a year. Merriam-Webster can show the ways a word can tell you about a period of time with a tool called Time Traveler that reveals words that first appeared in its print dictionary in the year you were born. https://www.merriam-webster.com/time-traveler/2020

In a bizarre incident in the most populous Arab country, an Egyptian man has moved to family court seeking a divorce from his wife after seeing her without makeup a month after marriage. Reports in Arab media cited that the husband said he was shocked to see his barefaced wife the morning after their wedding as according to him the bride looked ugly without makeup. The disgruntled husband, who now claimed of getting deceived, wants a divorce around a month of marriage. “I saw her pictures on social site, she looks totally different when she does not wear makeup...I was deceived as she used to apply heavy makeup before marriage. She looks ugly without makeup,” he told the court. The man told the court that he first tried to overcome his wife’s unattractive looks, but he decided to file for divorce after a month of marriage. “I was deceived by her as she used to apply heavy makeup before marriage,” the man added. “But after the wedding, I saw her real face without makeup, she looks ugly.” (https://bit.ly/3mTVPY8)

Millions of red crabs are migrating to the ocean in Australia, forcing the country to close many roads. (https://bit.ly/3wak1sx)

A suspected car break-in suspect in Deltona couldn't hide his love for pizza – which ultimately led to his arrest, Volusia deputies said. Dewey J. Smith was arrested Wednesday after deputies followed a trail of evidence including red sauce on the door handle of one vehicle, and a pizza box and plates left behind near another one. Smith was reportedly found walking down the street in a neighborhood carrying a victim's credit cards and IDs. The car break-in was reported on Wednesday on Jefferson Ave. Deputies say when they responded to a call about a car break-in, they found that the car's center console had been rummaged through and that the thief left behind what appeared to be marinara sauce on the inside handle of the driver’s side door. Smith is facing several charges including armed burglary of a conveyance, four counts of fraudulent use of credit cards, grand theft of a firearm, and possession of a firearm by a convicted felon.(https://bit.ly/3q1xJwv)

A man suspected of stealing a go-kart from a Parker Murdoch’s store was arrested after returning to the same store for the third time, the Parker Police Department announced Saturday. The man, whose name was not released, was arrested last week after employees at the Murdoch’s location called police when the suspect returned. The suspect is accused of stealing a go-kart from the same store Sept. 24 after an unsuccessful attempt two-weeks earlier. Police said the suspect, who has one arm, flipped the go-kart and then abandoned it during an attempt on Sept. 11. But the alleged Sept. 24 theft was successful. Last week, the suspect returned to the Murdoch’s store for a third time, but employees were ready and immediately called police. The department said the suspect was arrested for outstanding warrants and transported to the Douglas County Jail. (https://bit.ly/3CwavlI)

The limits of the possible can only be defined by going beyond them into the impossible. - Arthur C. Clarke

ASPCA 'Kid Of The Year' Goes Above And Beyond To Help Shelter Dogs Get Adopted https://www.sunnyskyz.com/good-news