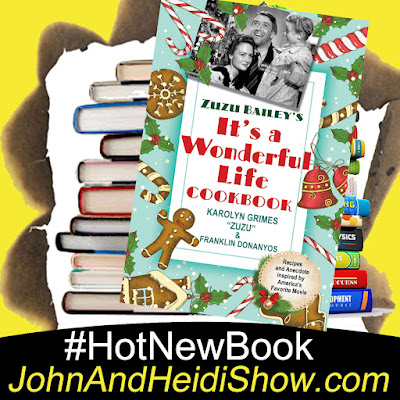 Today we visit with Karolyn Grimes. As a child, she was Zuzu Bailey from the classic movie “It's A Wonderful Life”

We will visit about the movie, her life and her new cookbook. Zuzu Bailey's "It's a Wonderful Life" Cookbook - https://amzn.to/3rPKtYk

According to a new poll, more than 7 in 10 dog owners admit their pup gets more table scraps during the holidays than any other time of the year. 29% of people polled point the finger at their mom as the most likely culprit to feed their dog under the table during dinner. (https://bit.ly/3dqqgQk)

A new study claims more than half of American young adults are obese and overweight. (https://bit.ly/3y3yQ10)

A Louisiana man who was busted for allegedly trying to enter a neighbor’s apartment at 2:00 a.m. explained to police that “a big snake told him to open the victim’s door and go inside.” On a related note, 52-year-old Jessie Terry also reportedly told arresting officers that he had smoked crack “within the last hour.” Terry was collared after police responded to the West Monroe residence of a woman who reported that Terry “attempted to open the back door to her apartment.” During police questioning, Terry -- who lives near the victim’s residence -- reportedly spoke of his recent crack use and how he was told to open the woman’s door and enter her home by a “big snake.” The reptile in question is not further described in the arrest affidavit. Terry was booked into the local jail for unauthorized entry of an inhabited dwelling, a felony, and disturbing the peace, a misdemeanor. The affidavit notes that Terry has a “lengthy” criminal history. (https://bit.ly/31eAe4V)

Jeff Garlin spoke out about the multiple H.R. Investigations into his inappropriate conduct on the set of “The Goldbergs.” Garlin ACTUALLY said that he's being investigated because he likes to hug people on set.(https://www.dailymail.co.uk/tvshowbiz/article-10273921/The-Goldbergs-star-Jeff-Garlin-speaks-HR-investigation-inappropriate-conduct-set.html)

Impatient children have long complained about it but now it seems scientists agree: older people really do tell longer, more boring stories. Australian researchers found people over the age of 65 seem to lack the ability of their younger counterparts to tell stories efficiently and clearly. Their study found when younger people tell a story repeatedly they become more efficient, cutting the number of words they use. But older people don’t. And the author of the study said older people were also more likely to contradict themselves. The study of 30 healthy people over 65 and 30 between 18 and 49 found the older group used about 100 words to tell a simple story about a cowboy who had a trick played on him, and this didn’t change after four tellings. The younger group used about 80 words, decreasing to about 70 by the fourth telling.

Cardi B has been named the new creative director of Playboy Magazine. (https://pge.sx/3DtUQ60)

The chief executive of New York-based online mortgage lender Better.com laid off some 900 employees during a now-viral Zoom call. He slammed the ex-workers for allegedly “stealing from our customers” by not being productive. (https://bit.ly/3pxz1xG)

It’s impossible to hum while holding your nose.

China appears to be eyeing its first permanent military base on the shores of Africa's Atlantic coast. (https://fxn.ws/3Im5mjv)

An Italian man thought he had an ace up his sleeve to circumvent his country’s COVID-19 vaccine mandates — but was busted when he showed up for his shot wearing a fake arm. The creative anti-vaxxer may have paid hundreds of euros for the silicone prosthetic, which he wore to the vaccine center in Biella. The 50-year-old — who sought to avoid the jab but still get the so-called Green Pass — signed a consent form and lifted up his sleeve for the health care worker, who didn’t notice anything amiss at first. But when the woman touched the faux limb, she realized something was odd, told the man to remove his shirt and discovered the trickster’s strong-arm tactic. The worker, 60-year-old Filippa Bua, told the Italian newspaper La Repubblica that she “felt offended as a professional,” adding that “the color of the arm made me suspicious … It was well-made, but it wasn’t the same color.” She told La Stampa she could not see any veins. “At first I thought I made a mistake — that it was a patient with an artificial arm,” she said. The shameless man still tried to persuade her to turn a blind eye to his ruse while injecting some levity by asking, “Would you have imagined that I’d have such a physique?” Piemonte president Alberto Cirio said in a joint statement with regional health chief Luigi Icardi, “The promptness and skill of the health worker ruined the plans of this person, who will now have to respond to the judiciary.” https://bit.ly/3pub5v1

A man has been accused of working as the principal of a Providence, Rhode Island school—while simultaneously keeping his former job, as a middle school assistant principal, all the way in Washington, D.C. The incident is one example of a broader trend that appeared during the COVID-19 pandemic. As many office workers transitioned to a remote workplace, some seized the opportunity to juggle additional employment, in the form of a second full-time job. Michael Redmond, an assistant principal with D.C. Public Schools (DCPS), has been accused of holding a second full-time principal job, 400 miles away. According to a complaint filed by the District of Columbia Board of Ethics and Government Accountability, Redmond admitted to the transgression, which violated four provisions of the District Code of Conduct. He began working in-person as principal of Providence's E Cubed Academy on July 22, 2020. Meanwhile, he remained employed virtually as the assistant principal of Kramer Middle School in Washington D.C., a role he held since 2019. According to The Washington Post, Redmond resigned from his DCPS role "immediately" after learning that he was not allowed to work both jobs. (https://bit.ly/3pt7z41)

Luck is a dividend of sweat. The more you sweat, the luckier you get. - Ray Kroc