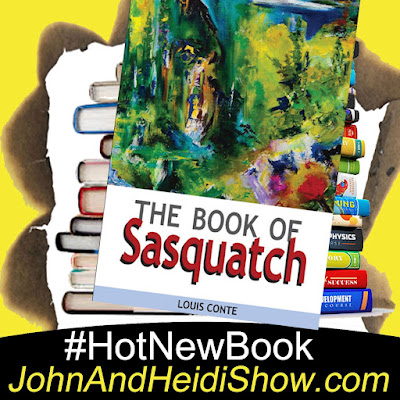 This weekend we visit with Louis Conte, author of The Book Of Sasquatch.
AVAILABLE NOW - https://amzn.to/31PyDmi

A study found that 20 percent of adults have at least one tattoo.

In a new poll of 2,000 Americans who have worked from home throughout the pandemic, 41% share that they have found themselves working from their car, 34% in their bathroom, and 33% in their closet. This work-from-home survey reveals that half of employees prefer to continue doing their jobs remotely forever. (https://bit.ly/31CpWeK)

A Polk County woman was arrested Wednesday after deputies say she lost track of two children she was caring for while heavily intoxicated. Deputies were called to the WaWa on Highway 27 in Davenport after employees there reported that a child had been abandoned at the gas station. They told the deputies a woman, identified as 27-year-old Samantha DiCastro, was there trying to buy cigarettes with two children and was obviously very drunk. One employee reported seeing a bottle of Bacardi rum tucked into DiCastro waistband. When the clerks denied DiCastro service, deputies say she exited the store with a two-year-old child in her arms, but left an eight-year-old there. According to her arrest report, Deputies found DiCastro as she was walking home along the highway while still carrying the two-year-old. The responding deputies also noted DiCastro appeared to be clearly intoxicated. According to the arrest report, at one point she placed the toddler on the ground and began looking for him shortly afterward, even though the child was still in the same place she’d left him. While in custody, deputies say DiCastro stated that she didn’t feel she had to care for the child left at the WaWa. Deputies determined they had cause to charge DiCastro with two counts of negligent child abuse. She was also charged with disorderly intoxication.(https://bit.ly/3pxQplW)

“Vanderpump Rules” stars Raquell Leviss and James Kennedy have called off their engagement after five years of dating. (https://pge.sx/3Gg0omG)

In a new interview, Former Sopranos Star Edie Falco says she became an alcoholic to overcome her shyness. (https://on.today.com/31E9Q4h)

John Cho, star of the “Harold & Kumar” film series, says that he's unsure about whether a fourth installment will be made. (https://bit.ly/3dvcN9K)

Elon Musk says that by the end of next year he hopes to implant computer chips into humans. (https://bit.ly/3y5zivn)

A substitute teacher has been dismissed by an Austin, Texas High school, after bringing a karaoke machine and disco lights to a classroom and performing a Britney Spears song for his students. (https://tinyurl.com/2p8nhsad)

A teenage driver is reportedly okay after her Honda Accord became wedged under a moving semi-truck and was dragged along the highway at top speed. (https://bit.ly/3EBzEwg)

Some pets seem pretty smart, but why confuse them by calling them something other than their name? Apparently 62 percent of dog and cat owners have nicknames for their furry friends.

Dog owners have been reminded not to brush their pet’s teeth with human toothpaste.

Your stomach acid is strong enough to dissolve metal.

A new report claims Cocaine use is common in the UK parliament. (https://bit.ly/3otMibi)

Hundreds of wild spiders and insects were seized by Colombian authorities on Thursday as they foiled an alleged attempt to smuggle the bugs to Europe. A statement from Bogota's environmental authority said at least 232 tarantulas, 67 cockroaches, 9 spider eggs, and a scorpion with 7 of its young were confiscated at the capital's El Dorado airport. The bugs were kept in more than 200 plastic containers hidden in a suitcase, the statement said. Two German citizens were detained and will be prosecuted, officials said. They said they were taking the animals to Germany for academic purposes, but lacked the permits to collect and transport them. Authorities examine the bugs that were allegedly found hidden in a suitcase. Video shows some of the insects crawling around a box as authorities examine them. A tarantula can be seen climbing on a wooden branch, while another bug crawls across an official's arm while they inspect it. Bogota's environment secretary, Carolina Urrutia, said even if people intended to use wild animals for scientific research, they still need permission from the relevant authorities to remove them from the country. (https://cnn.it/3GhoRI4)

A Maryland man is facing fraud charges for allegedly selling more than 600 fake COVID-19 vaccine cards that he advertised on Facebook for $75 each. 23-year-old Amar Shabazz purchased the fake vaccination cards through a foreign online marketplace in June and then started advertising them on his social media accounts. “Covid19 vaccination card who want one. $75 a pop,” he wrote in one post, according to a criminal complaint. A month later, he posted “I sell proof of vaccination cards” underneath a link to a news article about restaurants requiring proof of vaccination. Shabazz allegedly told one potential buyer in a private message that he had run out of vaccine cards. “Made 300 today. I’m sold out. Just bought 500 more cards. 60×500 is $30k. I’m gonna be rich,” he told the person, prosecutors said. Customs and Border Patrol agents seized a package addressed to “Mar Sha” and linked to his phone number in late August amid a crackdown on fake vaccine cards. After being alerted that his package was delayed by the shipping company, Shabazz allegedly searched online for whether customs was inspecting packages for vaccine cards. Shabazz then placed another order for vaccine cards from the same website under the name “Ace Boogie,” prosecutors said. The FBI raided his home in October. Shabazz is facing up to 20 years each for mail fraud and obstruction of justice if convicted in the vaccine card case. (https://bit.ly/3lDXlgf)

Always make a total effort, even when the odds are against you. - Arnold Palmer