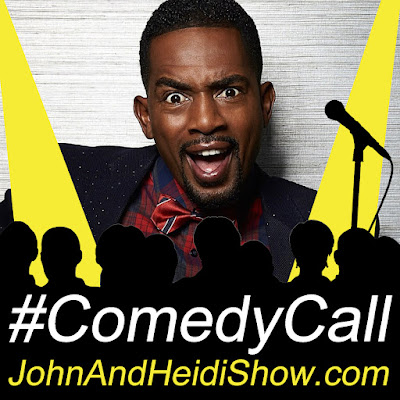 Bill Bellamy (Rich Christmas) BET+ has set the date for the original made-for-tv movie, Tressa Azarel Smallwood's A Rich Christmas, starring Bill Bellamy (Def Comedy Jam), Brandee Evans(P-Valley), Denise Boutte (Meet The Browns) and Vanessa Williams (Soul Food), directed by Victoria Rowell for Thursday, November 4th on their successful streaming platform, BET Plus. In this exclusive kickoff of BET 2021 holiday programming, Tressa Azarel Smallwood's MegaMind Media brings you a delightful film centering on a spoiled socialite who will learn a lesson after her father asks her to work in a family homeless center.

A Professor of Pathology at Stanford University has published a study on the brains of people who say they've had a UFO Encounter. (https://bit.ly/3ILlPy3)

A recent study from Harvard Medical school suggests vaccines given in the afternoon can produce more antibodies than the ones given in the morning.(https://cbsloc.al/3GGzUeg)

Two of America’s most beloved brands -- Waffle House and methamphetamine -- are at the center of a new criminal prosecution in Tennessee. Investigators allege that Anthony James Silcox, a 31-year-old cook, sold meth from a Waffle House in Caryville. Cops, search warrant in hand, raided the Waffle House Friday afternoon and arrested Silcox while he was “standing at the grill.” A search of Silcox yielded 3.3 grams of a “crystal like substance” believed to me meth, as well as drug paraphernalia. During a police interview, Silcox reportedly admitted to selling meth from the Waffle House, but said that he “does not sell methamphetamine everyday but has sold methamphetamine several times in the past.” Silcox, cops reported, stated that he was just “trying to make a living” and was currently residing in his Ford F-150 truck and at “random motels.” Charged with sale and delivery of meth, a felony, and possession of drug paraphernalia, a misdemeanor, Silcox is locked up in the Campbell County jail in advance of a December 9th court hearing.(https://bit.ly/3lJS9ao)

Ryan Reynolds said in a recent interview that he’s taking a break from acting so he doesn’t miss time with his kids. (https://bit.ly/3Dviv6l)

Chicago Police Chief Eddie Johnson says he would NOT have arrested Jussie Smollet if he would've apologized for lying about his fake attack. (https://bit.ly/31Jva8Y)

Elon Musk has been named Time Person of the Year. (https://bit.ly/3oMpKT7)

Dozens of contestants have been disqualified from a Camel beauty contest in Saudi Arabia for illegal use of Botox. (https://bit.ly/3IEoOYS)

Lobsters pee out of their faces.

Tourists at a four-star resort in Cancun were forced to run for their lives as gunmen on jet skis stormed the beach and opened fire. The shooting at the Oasis Palm resort is just the latest in a rash of gunplay in the region that had Mexican authorities last month deploy a 1,500-strong National Guard force. (https://bit.ly/3pJZ6tg)

The Coconino County Sheriff's Office needs your help tracking down a woman who allegedly opened fire at a man she met on Instagram. A man renting a condo in the Munds Park area, near Flagstaff, reported to authorities that he had been staying there with 22-year-old Lilly Beeler. He was apparently sleeping on the couch when he says Beeler shot at him twice, demanded property and money, and took off in a Lyft. An extensive search was conducted by the Sheriff’s Office, Arizona Department of Public Safety, and Flagstaff Police Department for the suspect who had been dropped off on Woodlands Village Boulevard. "There's people out there who look to harm - whether it be emotionally, financially, and physically - other people," says Lt. Charles Hernandez with Flagstaff Police Department. Beeler is believed to be from the Las Vegas area and should be considered armed and dangerous. She was last seen wearing a black plaid shirt, blue jeans, red shoes, and was carrying a black Nike gym bag. The handgun she used is described as a silver and pink semiautomatic gun. The Coconino County Sheriff’s Office is asking for the public’s assistance in this matter. (https://bit.ly/31CizUR)

Two Massachusetts State Police troopers have been suspended without pay for turning a hallway at the state police academy into a makeshift “Slip ‘N Slide” game. Trooper Douglas Grout was suspended 45 days and Trooper Ryan Stanley 30 days after it was revealed they ordered trainees to slide shirtless, headfirst down a hallway floor doused with water, WCVB-TV reported. The troopers were disciplined after video of incident, which occurred earlier this year, surfaced. Grout recorded and shared the video with others, the news outlet reported. It showed one of the trainees sliding face-first on his stomach along the watery walkway. Apparently safety wasn’t totally overlooked: the male trainee was sporting a safety helmet. Grout won’t be eligible for the next two promotional exams, and Stanley won’t be eligible for the next promotional exam. Both troopers were removed from their posts at the academy following a probe by the state police. (https://bit.ly/33hjhqV)