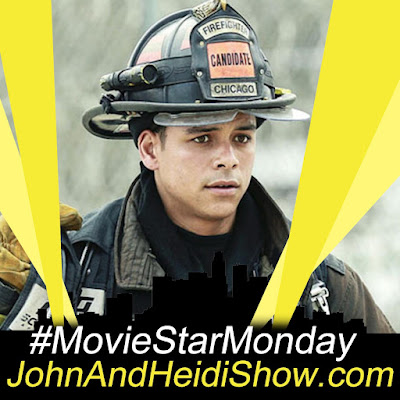 This #MovieStarMonday we visit with Charlie Barnett from Men and Black 3 as well as the TV show Chicago Fire and NBC's new hit Ordinary Joe.

A new study says using Viagra may reduce the risk of getting Alzheimer’s by nearly 70%. (https://bit.ly/31ts6h7)

If gas prices are high do we cut back on our driving? Probably not. A 2006 study showed record high gas prices in that year didn’t make a serious dent in America’s demand for fuel. The study (UC Davis) showed soaring prices prompted Americans to cut back their driving only slightly.

A Florida woman is facing charges after she allegedly left her infant alone in a crib on Thanksgiving night to go to the bar. Deputies say 37-year-old Victoria Hidalgo of Port Charlotte left for the bar after she fired a gun into the front door of her home on Thanksgiving evening. Police were called to the home after a woman said she received a call from Hidalgo who “sounded as though she was under the influence of alcohol” and stated she fired a gun inside the home. When the woman arrived to check on the home, she noticed their shared vehicle was not in its parking space and found a bullet in the front door. When deputies arrived, they were let inside the home where they found a child left in a crib unsupervised. During an investigation, detectives learned the shared vehicle was stopped by deputies later that night. Hidalgo was reportedly in the front passenger seat alongside a male driver. Police say Hidalgo’s eyes were bloodshot and watery, her breath smelled of alcohol and her speech was slurred when she was questioned. The man told police he just met Hidalgo at the Paddy Wagon Irish Pub. He added that he was concerned Hidalgo was going to drive home in a very intoxicated state so offered to help her get home safe. Police say he did not have any knowledge of the situation at the home. Hidalgo was taken into custody on a charge of child neglect without great bodily harm. She was taken to the Charlotte County Jail and is currently out on a $3,500 bond. (https://bit.ly/3lX1hJd)

The cast of Harry Potter is reuniting for a return to Hogwarts. (https://tinyurl.com/29zjh86e)

In a new interview, Rebel Wilson said that her management team was against her losing weight. (https://tinyurl.com/uf7ex5sf)

Oregon is on the verge of enforcing a permanent indoor mask mandate as cases continue to rise. (https://www.dailymail.co.uk/news/article-10277183/Oregon-set-enforce-permanent-mask-mandate-residents.html)

A boater reportedly found a massive package of cocaine floating in the water off the Florida Keys. The massive package, weighing 69 pounds, was estimated to have a $1 million street value. (https://bit.ly/3dIPQjP)

A 25-year-old Illinois man with a Tesla face tattoo and green hair was arrested for driving drunk on a suspended license. (https://bit.ly/3y2auod)

Australia has been named the drunkest country in the world. A new survey found that on average Australians are getting heavily drunk twenty-seven times per year. (https://bit.ly/3duijto)

Golf is the only sport to have been played on the moon.

In Switzerland a driver hated that a camera had caught him speeding again. So he went after it with a pick ax, smashing it free from its mountings. Of course, the camera caught the whole thing and the guy was arrested.

A 40-year-old Sioux City man has been sentenced to 54 years in prison for running over his friend and shooting at the victim’s girlfriend. Jayme Powell was sentenced Friday for two counts of attempted murder and other charges. Prosecutors said Powell ran over Richard Polak, who riding his motorcycle on Interstate 29 after the two had a fight in Sioux City. Powell also was convicted of firing shots at Polak’s girlfriend, Jaimi Bucholz, who was driving with a baby in her vehicle. Polak, of Omaha, suffered numerous injuries and walked with a cane during the sentencing hearing Friday. (https://bit.ly/3IzBws2)

Officials are investigating after a Southwest Airline passenger got out of a plane after landing at Phoenix Sky Harbor early Saturday morning. Initial reports came in around 8:00 a.m. when multiple agencies responded to Southwest Flight 4236. Southwest says the flight was coming from Colorado Springs when a passenger onboard, later identified as 30-year-old Daniel Ramirez, got out of the plane through a rear galley door as it was taxiing to the gate. The airline says that at point, the captain stopped the plane and notified air traffic controllers. Phoenix fire crews say Ramirez walked over to a nearby fire station where he locked himself in a dormitory room. Firefighters were able to get Ramirez to unlock the door a few minutes later, and he was taken to the hospital for his injuries. It's not clear how Ramirez was able to get out of the plane. According to Sgt. Vincent Cole with Phoenix Police Department, Ramirez has been booked on two felony counts of trespassing. Arizona's Family is working to learn more information. (https://bit.ly/3DvRmjz)

Every moment and every event of every man’s life on earth plants something in his soul. - Thomas Merton