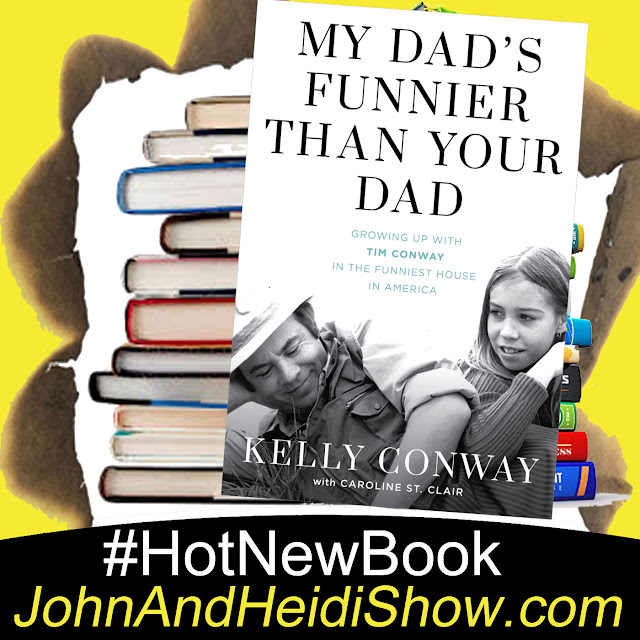 Our guest this weekend is author Kelly Conway. We'll talk about her new book about her dad “MY DAD'S FUNNIER THAN YOUR DAD Growing Up with Tim Conway in the funniest house in AMERICA” https://amzn.to/3F6Nuaf

According to a new survey, just 42% of people feel optimistic about post-pandemic life. A majority of those surveyed said that the “new normal” of fearing viruses and overwhelming stress is impacting their well-being. (https://bit.ly/31OtKKl)

A new study claims the average person is just as smart as brain surgeons and rocket scientists. (https://bit.ly/3DYV7hA)

A drunk man was arrested for throwing an ashtray at a door at Dixie Roadhouse in Cape Coral, causing $4,000 worth of damage. Bradley Curry was arrested on a criminal mischief charge with property damage after the incident, according to the Cape Coral Police Department. The bouncer at Dixie Roadhouse told Curry he wasn’t allowed in after noticing he was a bit too drunk. Cape Coral police said he picked up a 3-foot-tall ashtray and threw it at the door, completely shattering it. https://nbc-2.com/news/2021/12/08/drunk-man-arrested-for-shattering-dixie-roadhouse-door-worth-4k/

Barbara Broccoli, the woman who controls the James Bond Franchise through her Eon Production Company, says the next 007 could be non-binary and refuse to identify as a man or a woman. (https://www.dailymail.co.uk/news/article-10299843/007-future-considers-neither-male-female.html)

Mariah Carey now has her own menu at McDonald’s to celebrate the holiday season. The Mariah Menu is available on the McDonald’s App. (https://bit.ly/31Q7HD6)

So exactly when did we humans learn that no two snowflakes are alike? Wilson A. Bentley is the man generally credited with figuring it out. By adapting a microscope to a bellows camera, he became in 1885 the first person to photograph a single snow crystal. He went on to photograph some 5,000 snowflakes over more than 40 years and never found a perfect match between them. Ironically, Wilson Bentley died of pneumonia after walking home through a blizzard in 1931.

Tesla has announced that it will accept Dogecoin as payment. (https://cnb.cx/327MNz6)

The Stanford School of Medicine has found that the blood of athletes can be used to increase the fitness of lazy people. (https://bit.ly/3oT5y1W)

The Idaho Department of Fish and Game once used parachutes to get beavers to a new home.

A Singapore Resident in his 60s says he’s lucky to be alive after being bitten 26 times by a gang of Otters. (https://bit.ly/31YMNl9)

A man who told police he wanted to steal a jet so he could fly to Area 51 to look at aliens was arrested Wednesday after he drove through fences at the McCarran International Airport in a limo, parked on an aircraft ramp and made a bomb threat, according to a police report by Las Vegas Metropolitan Police Department. The suspect was arrested for trespassing, dispersing a hoax substance and threatening terroristic acts, the police report said. Police first received a call of a vehicle performing donuts at the Jet Suite X parking lot at McCarran Airport at 6:45 p.m. As they were responding to the call, they were told the vehicle had breached inner and outer security gates and was now driving recklessly across a plane ramp, the report said. Prior to police arrival, the report states that airport police also witnessed the suspect drive between several airplanes before stopping next to a parked jet and threatening Atlantic Aviation employees who had confronted him. "I have a f***ing bomb. I'm going to blow this place up," the suspect -- who witnesses said was wearing a clown mask -- told employees, according to the police report. He then re-entered the car as employees fled for cover and began evacuating the airport, the report added. When police arrived, they were able to stop the vehicle and immediately detain the man, who told them he was trying to steal a jet and fly to Area 51 to see aliens and that he had a gasoline device and shotgun in his car, the police report noted. A search of the suspect's car revealed there was a device similar to an oxygen tank and what appeared to be a fire extinguisher with heavy-gauge wiring wrapped around it and a wooden platform. During the incident, the suspect nearly crashed into several planes, disrupted air traffic, and prompted a major response by Las Vegas police and the FBI, police stated in the report.(https://cnn.it/3ylUAVH)

A 76-year-old Florida Woman was arrested for allegedly targeting her ex-boyfriend and his new girlfriend in an auto vandalism spree that employed oil, pink lipstick, and a dead raccoon. According to police, Patsy Murrell vandalized the cars in late-September, three months after her relationship with Stephen Hughes, 74, ended. Hughes’s new girlfriend, an arrest affidavit notes, is Michelle Busman-Baio, 64. Investigators charge that Murrell damaged the vehicles while they were parked at night outside Hughes’s home in Largo, a city in the Tampa Bay area. Hughes’s 2011 Chrysler had oil poured into its air vents and the words “Loves Kinkey Sex” and “Wominzer” written on the windows in pink lipstick. The auto also sustained damage to its rear bumper, allegedly when Murrell rammed the car with her vehicle. The estimate to repair Hughes’s ride was about $1600, cops noted. “Multiple parts” of Busman-Baio’s 2020 BMW were damaged by Murrell, according to the arrest affidavit. Oil was poured on the car, a dead raccoon was left on the hood, and the word “Slut” was written on the vehicle in pink lipstick. The BMW was judged a “total loss,” cops reported, adding that the insurance settlement amount exceeded $33,000. Murrell was arrested on a pair of felony criminal mischief counts. Murrell, who lives in South Pasadena, a city near St. Pete Beach, was released last night from the county jail on her own recognizance. (https://bit.ly/3rYNYvB)

The greatest crime in the world is not developing your potential. When you do what you do best, you are helping not only yourself but the world. - Roger Williams