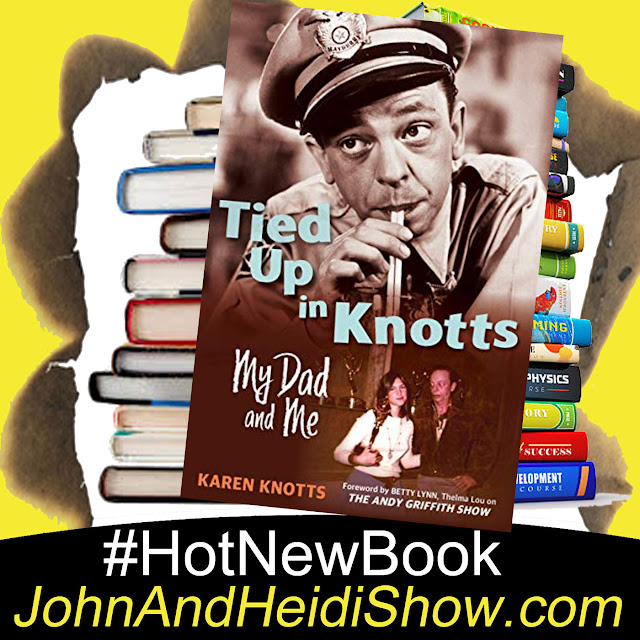 Today we visit with Karen Knotts... an acclaimed actress, playwright, stand-up comedienne and daughter of legendary comedian, Don Knotts. She is also the author of the new book “Tied Up in Knotts : My Dad and Me”

Much has been written about Don Knotts's career, especially about his iconic role as Barney Fife on The Andy Griffith Show, but personal views into the man himself are few and far between. In Tied Up in Knotts, a loving daughter provides a full-life narrative of her father: Don's difficult childhood in an abusive home, his escape into comedic performance, becoming a household name, his growth as a feature film actor, his failing health, and his family life throughout, leading to touching and hilarious moments that will make the reader laugh and cry. Tied Up In Knotts delves beyond Barney Fife nostalgia to tell the life story of a man and father. https://amzn.to/3mpJMRH

The 10 best Christmas songs of all time

1. ‘All I Want For Christmas Is You’ by Mariah Carey

6. ‘Fairytale of New York’ by The Pogues and Kirsty MacColl

7. ‘Christmas Wrapping’ by The Waitresses

9. ‘Rockin’ Around the Christmas Tree’ by Brenda Lee

Christmas came early for one California man, dubbed the “Drunk Santa Suit Criminal,” and he is most definitely on local law enforcement's naughty list. Brea Police arrested the festive, and apparently impatient, man Tuesday after they found him inside his car at around 7 a.m., FOX11 reported. The man, who has not been identified by authorities, appeared to be under the influence of alcohol or drugs or both, police said. Police took to social media to share a "message" from the “Drunk Santa Suit Criminal.” “Dear Santa,” the letter began, “I'm sorry I stole your red suit. I was drunk and made some poor choices. I know it's only October. And it's hot. Too hot for this suit. But I was drunk. Poor choices.” It was signed “sincerely, Drunk Santa Suit Criminal.” It was not immediately clear if any potential repercussions would include a lump of coal. https://www.foxnews.com/us/drunk-santa-arrested

Where did the word "Christmas" originate? The Nativity of Christ was introduced as a special feast in Rome about the middle of the 4th century. The word "Christmas" can be traced back to 1038 to the "Mass of Christ," in old English pronounced "Cristes Maesse."

More than 30-million Americans had presents under their Christmas tree this morning for their dog.

22% of U.S. families put up an artificial Christmas tree each year.

It's not until the twelfth night of Christmas that the Three Kings are supposed to be added to the Christmas nativity scene. In Germany, Twelfth Night - the evening of January 5th - is known as 'Three Kings Day'.

Mincemeat pie shouldn't be eaten until after sundown on January 5th. Eating mince pies at Christmas dates back to the 16th century. It is still believed that to eat a mince pie on each of the Twelve Days of Christmas will bring 12 happy months in the year to follow.

The state songs of Maryland is to the tune of "Oh Christmas Tree." Same goes for Michigan, although the tune is officially that of "O Tannenbaum"

The story goes that some time ago, a man punished his 3-year-old daughter for wasting a roll of gold wrapping paper. Money was tight and he became infuriated when the child tried to decorate a box to put under the Christmas tree. Nevertheless, the little girl brought the gift to her father the next morning and said, "This is for you, Daddy." He was embarrassed by his earlier overreaction, but his anger flared again when he found the box was empty. He yelled at her, "Don't you know when you give someone a present, there's supposed to be something inside it?" The little girl looked up at him with tears in her eyes and said, "Oh, Daddy, it's not empty, I blew kisses into the box. All for you, Daddy." The father was crushed. He put his arms around his little girl, and he begged for her forgiveness. It is told that the man kept that gold box by his bed for years and whenever he was discouraged, he would take out an imaginary kiss and remember the love of the child who had put it there.

MOMENT OF DELIGHT: Brought to you by BetterResultsAdvertising.com

My son, Nicholas, was in kindergarten that year. It was an exciting season for a six year old. For weeks, he'd been memorizing songs for his school's "Winter Pageant."

The morning of the dress rehearsal, I filed in 10 minutes early, found a spot on the cafeteria floor and sat down. Around the room, I saw several other parents quietly scampering to their seats. As I waited, the students were led into the room. Each class, accompanied by their teacher, sat cross-legged on the floor. Then, each group, one by one, rose to perform their song. Because the public school system had long stopped referring to the holiday as "Christmas", I didn't expect anything other than fun, commercial entertainment - songs of reindeer, Santa Claus, snowflakes and good cheer. So, when my son's class rose to sing, "Christmas Love", I was slightly taken aback by its bold title.
Nicholas was aglow, as were all of his classmates, adorned in fuzzy mittens, red sweaters, and bright snowcaps upon their heads.  Those in the front row - center stage - held up large letters, one by one, to spell out the title of the song.
As the class would sing "C is for Christmas", a child would hold up the letter C. Then, "H is for Happy", and on and on, until each child holding up his portion had presented the complete message, "Christmas Love".
The performance was going smoothly, until suddenly, we noticed her - a small, quiet, girl in the front row holding the letter "M" upside down - totally unaware her letter "M" appeared as a "W".
The audience of 1st through 6th graders snickered at this little one's mistake. But she had no idea they were laughing at her, so she stood tall, proudly holding her "W". Although many teachers tried to shush the children, the laughter continued until the last letter was raised, and we all saw it together. A hush came over the audience and eyes

began to widen. In that instant, we understood - the reason we were there, why we celebrated the holiday in the first place, why even in the chaos, there was a purpose for our festivities.

For when the last letter was held high, the message read loud and clear: CHRIST WAS LOVE.

And, I believe, He still is.

"Santa Claus is anyone who loves another and seeks to make them happy; who gives himself by thought or word or deed in every gift that he bestows." - Edwin Osgood Grover

MUCH GOOD NEWS: Brought to you by BetterCreditCards.com

Ex-Homeless Man Decorates His Home With Over 16,000 Christmas Lights To Raise Money For Charity https://www.sunnyskyz.com/good-news/4494/Ex-Homeless-Man-Decorates-His-Home-With-Over-16-000-Christmas-Lights-To-Raise-Money-For-Charity

Nurse Adopts Patient's Dog So He Can Keep Seeing His Pet While He Recovers https://www.sunnyskyz.com/good-news/4501/Nurse-Adopts-Patient-039-s-Dog-So-He-Can-Keep-Seeing-His-Pet-While-He-Recovers