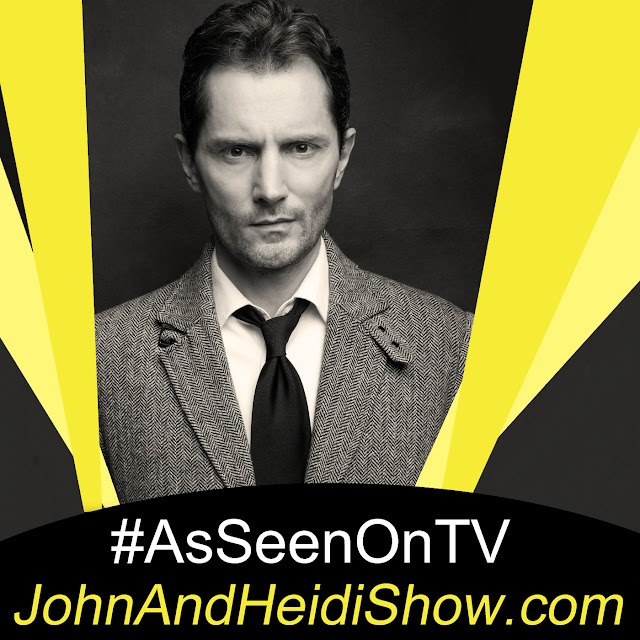 Today we visit with John Emmet Tracy. He returns to Yellowstone. Sundays 8/7CT on Paramount network. John plays ‘Ellis Steel’ who is the head legal representative for Market Equities Group, who have serious development ambitions in the valley. In season 4 Tracy’s character ‘Ellis Steele’ has wonderful villainous moments with Jacki Weaver (portraying Caroline Warner) whose character is set to Bring ‘Yellowstone’ crashing down.

John has had a decade long relationship with both the CW network and DC Comics, portraying major villains on CW's DC affiliated shows such as Batwoman, iZombie, Supernatural and Smallville.

John has worked extensively in theatre, film and television, performing lead, recurring and supporting roles in many additional television shows, including Yellowstone, Olympus, Man in the High Castle, to name a few. In the realm of film, John has appeared in Fifty Shades Freed, If I Stay, American Mary, Stagecoach: The Texas Jack Story and Steven Spielberg's The BFG. He also portrayed the duplicitous Edgar John Brandon in The Mary Alice Brandon File, the winning film entry in The Storytellers: New Voices Of Twilight Saga. He has also portrayed Thomas Jefferson in both Assassin's Creed III and Assassin’s Creed III: The Tyranny of King Washington, the third instalment and DLC respectively, of the multiple award winning and critically acclaimed video game series. https://www.paramountnetwork.com/video-clips/1mykft/yellowstone-yellowstone-a-long-line-of-enemies

According to a survey, 1 in 5 Americans have been injured while setting up their Christmas tree. Of those who admitted they were injured by a Christmas tree, most were men.

A survey of places that SOUND the most festive. There is such a place as Santa Claus, Arizona. There's also a Santa Claus, Indiana; a Noel, Missouri, and towns named Christmas in both Arizona and Florida

A drunk driving mom tried to fool cops by swallowing hand sanitizer before taking a breath test -- not realizing the anti-bacterial gel contained more alcohol. 29-year-old Shop assistant Sophie Nutter was told she was lucky not to be spending Xmas behind bars. Bleary eyed Nutter was spotted swerving all over road in a deathtrap car with four flat tires and a broken windshield. As a cop approached to breath test her in Beverley, East Yorkshire, she slurped from a bottle of hand sanitizer she kept in the vehicle. The court heard a cop spotted her "swerving violently all over the road" in her white Suzuki Swift and ordered her to stop. All the tires on the car were flat and the windscreen was smashed and had two noticeable impact marks. There was also dried blood on a rear door and a smear of blood on a front headlight. Nutter's eyes were glazed and she twice refused to provide a breath sample. She eventually blew 52mcg of alcohol in 100ml of breath. The legal limit is 35mcg. Recorder Alex Menary told the court that Nutter had put hand sanitizer in her mouth in an effort to reduce the alcohol reading but it did not work. She was in breach of a two-year suspended prison sentence for drug and other offences imposed at Hull Crown Court on October 9th last year. She was given a one-year community order, banned from driving for 23 months, and ordered to pay £100 costs. (https://bit.ly/3GTSAY0)


The song "White Christmas" was introduced in the 1942 movie "Holiday Inn".... and it was almost cut out of the final version of the movie! Bing Crosby's "White Christmas" -- one of the most popular songs of all time. The movie "White Christmas", starring Crosby and Danny Kaye, didn't debut until 1954. It was the first movie to be made in Vista Vision, a deep-focus process.

Celebrity Sex Therapist Shirley Zussman has died at the age of 107.(https://bit.ly/30LauwL)

A new viral video shows customers in China riding exercise bikes in a McDonald’s restaurant as they eat their meals. (https://bit.ly/3Fg0NFw)

Before stepping down as Director of the National Institute of health, Francis Collins performed a cringe-inducing song parody of "Somewhere over the Rainbow," called "Somewhere Past the Pandemic." (https://fxn.ws/3pbe4cW)

A video has gone viral of a South African family finding a poisonous snake in their Christmas tree. The snake's venom is so powerful, it could cause blood to pour out of every orifice your body has. (https://bit.ly/3qfT4km)

You better watch out — Santa’s robbing this bank. A Missouri man with a white beard and Santa hat was arrested for robbing a credit union and threatening to blow up the building, authorities say. Kenneth Hopper, 58, stole $1,000 from the First Community Credit Union in Bridgeton and threatened to unleash an explosion there before being busted with the cash by St. Ann police, according to court documents obtained by St. Louis Today. He was charged with first-degree robbery and making terroristic threats, said a spokesman for the St. Louis County Prosecutor’s office. Hopper was being held on a $100,000 bond. Officials said he was taken to the hospital following his arrest after experiencing chest pains. (https://bit.ly/3paNYGX)

A man robbed a Delaware bank and then tried to deposit the cash into his own account using the ATM outside. State police arrested McRoberts Williams Saturday after they say he robbed the Wells Fargo on Old Capitol Trail at the Prices Corner Shopping Center in Wilmington. Police said the 44-year-old California man handed a teller a note saying he was robbing the bank around 11:20 a.m. The 25-year-old woman then handed over an undisclosed amount of cash and Williams left the bank. "The suspect fled the bank on foot, and once outside he made a deposit in the atm on the exterior of the building," state police said. The man then ran behind the shopping center on foot where state troopers caught up to him and arrested him. Police said Williams was charged with second-degree robbery and sent to the county jail on $6,000 cash bond. It was unclear if he had an attorney would could comment on his behalf.(https://bit.ly/3dSeWwu)

“Christmas is built upon a beautiful and intentional paradox; that the birth of the homeless should be celebrated in every home.”- G.K. Chesterton