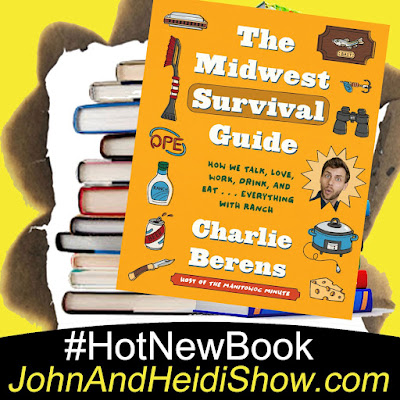 Today we visit with Charlie Berens about his new book The Midwest Survival Guide: How We Talk, Love, Work, Drink, and Eat . . . Everything with Ranch - https://amzn.to/3Dd3F49

A writer for the Arizona Republic newspaper (Karina Bland) asked: What fuels your road trips? Some of the responses:

A survey (by water company Evian) found a little over one in ten adults is “too busy” to drink more water. Interestingly, 15 percent of adults actually track their water intake with an app, and 10 percent track it with pen an paper.

A man in China smashed up two ATMs while drunk. He told police he was angry because the displayed time on the screen didn’t match the one on his phone.

If you’re going to pay for a trip to the movie, you may as well get the best seat you can. So, where is that seat? According to the way most theaters are set up, it will be two-thirds of the way back, in the center of the row. This is according to THX, and audio company founded in 1983 by George Lucas. It develops the “THX” high-fidelity audio/visual reproduction standards for movie theaters, screening rooms, home theaters and more.

New unemployment filings in the U.S. have fallen to their lowest level in 52 years, the Labor Department announced yesterday in its weekly report. The report said last week's 199,000 new filings were more than 70,000 fewer than the previous week's. By comparison, there were 256,000 new filings during the final week before the U.S. coronavirus pandemic struck the U.S. economy in the mid-March 2020.

This one goes into our Book of the Overly Obvious. A professor of psychology says there’s nothing like a sports blowout to make a college student put on his school colors. A professor of psychology at Arizona State University conducted research at seven major universities and found college students were “significantly more likely” to wear school-themed apparel after a victory.

In the U.S. there are five credit cards for every man, woman and child.

Police in Beijing police busted a man who set up a hidden video camera to spy on his female roommates. He basically turned himself in because he accidentally recorded himself putting in the device, which was eventually found by the roommates.

A Florida man has admitted that he illegally shipped turtles and venomous snakes from his home in South Georgia. Ashtyn Michael Rance of Miami on Thursday pleaded guilty to one count of wildlife trafficking and one count of possession of a firearm by a convicted felon, federal prosecutors said in a news release. 35-year-old Rance accepted $3,300 to ship three eastern box turtles and sixteen spotted turtles from his home in Valdosta to a customer in Florida, knowing that they would ultimately be shipped to China. He also agreed to send a package of 15 Gaboon vipers from Valdosta to Florida. The label on the box said it contained "harmless reptiles" and ball pythons, when it really contained venomous snakes. The federal Lacey Act prohibits transporting wildlife between states if the wildlife is illegal under state laws, and also prohibits falsely labeling a package containing wildlife. Rance is set to be sentenced February 23rd in Valdosta. He faces up to five years in prison on the wildlife trafficking charge and up to 10 years on the gun charge, as well as a $250,000 fine for each charge.(https://bit.ly/3oTJlPY)

A carnival worker shot fired a gun into the air during an argument with a co-worker and the bullet went through the window of a nearby assisted living facility and struck a 91-year-old woman. Authorities said the bullet traveled some 200 yards, from the grounds of the Broward County Fair to the first-floor window of the Waterside Landing assisted living facility in Margate. Officials said the woman is expected to recover from her injuries. 40-year-old Brandon Lucas Craig is facing multiple charges, including attempted murder, aggravated battery with a deadly weapon, battery, and carrying a concealed firearm. The fair opens December 5th, and city officials are assuring the public that the incident was an isolated case. “To ensure the safety of fairgoers and as initially planned, the Margate Police Department will be continuously patrolling the fairgrounds throughout the upcoming weeks to deter any further incidents and avoid any potential risks to public safety,” Margate Mayor Antonio Arserio told the South Florida SunSentinel. Craig remained in the Broward County Jail on Friday morning. (https://bit.ly/3HCfe8m)

Once you replace negative thoughts with positive ones, you’ll start having positive results. - Willie Nelson

Hero Driver Sacrifices His Own Car To Save Another Driver Who Is Having A Seizure
https://www.sunnyskyz.com/good-news/