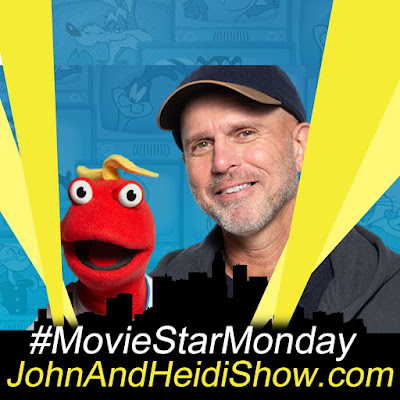 Today we visit with comedian, actor and TV Host Bill Leff about the Christmas programming at MeTV. It kicked off Monday... here is the schedule for the rest of the season.

6am ET/PT – The Beverly Hillbillies, “The Week Before Christmas”

6:30am ET/PT – The Beverly Hillbillies, “Christmas in Hooterville”

12am ET/PT – The Honeymooners, “ ‘Twas the night Before Christmas”

11pm ET/PT – Carol Burnett and Friends, “Nobody Does It Like Me”

6am ET/PT – Dragnet, “The Christmas Story”

1:30am ET/PT – Alfred Hitchcock Presents, “Back for Christmas”

6am ET/PT – The Beverly Hillbillies, “Christmas at the Clampetts”

6:30am ET/PT – The Beverly Hillbillies, “The Christmas Present” 🡪

1am ET/PT – Lost In Space, “Return from Outer Space”

2am ET/PT – Voyage to the Bottom of the Sea, “Long Live the King”

3am ET/PT – Land of the Giants, “Night of Thrombeldinbar”

A new study says people are more likely to stick to their workout routine if they get text message reminders when it's time to go to the gym. (https://nbcnews.to/31PpmtV)

A new survey finds that 3 in 4 young adults say finances are their biggest mental health issue. Almost two-thirds (65%) of respondents are often anxious to check their bank account. (https://bit.ly/3GrBj8a)

Police report that an Altoona man was jailed after they were called to a local bowling alley and he led them on a foot chase before assaulting and resisting them. Police were called to Pleasant Valley Bowl early Saturday after a complaint of a man, later identified as 32-year-old Timothy King Jr., threatening people with a gun. After arriving, they spotted King who began to run from the scene. An officer chased him on foot for about a block before King reportedly fell into someone’s yard. The officer was able to arrest him and escort him back to the patrol car, noting that he was slurring his words and appeared to be extremely intoxicated. During this, the officer noted that he felt a strong tug to his hip and then noticed King was grabbing at his holstered service weapon. King was then taken down with a hip toss to prevent him from getting the officer’s gun. After finally getting him back to the patrol unit, King refused to sit in the car and had to be physically placed into the back of the cruiser. King then kicked an officer and as they held his legs down, he was able to headbutt the same officer. Police had to utilize their pepper spray to stop him from striking them any further. King was found to have warrants through the Blair County Sheriff’s office. He was jailed on $100,000 cash bail. (https://bit.ly/3Ilwteu)

Universal Pictures Home Entertainment announced that they will release the 4K Ultra HD, Blu-ray, and DVD editions of “Halloween Kills” in January. (https://bit.ly/3lRVww2)

The new “West Side Story” movie about two rival gangs fighting in New York City during the 1950's is now in theaters. (https://bit.ly/3Gr2P5O)

Over thirty staff members and customers were forced to stay overnight in a Denmark IKEA after getting shut in by a snowstorm. (https://bit.ly/31DIH1C)

The Pope told reporters that he believes adultery is not a very serious sin. (https://bit.ly/3oCogee)

An ancient artifact has been returned to Iraq on orders from a Federal Judge after it was looted during the 2003 U.S. Invasion. (https://nbcnews.to/3IxsGuU)

The arsonist who torched the Fox News Christmas tree allegedly exposed himself to a group of reporters outside the Ghislaine Maxwell trial in Manhattan last week. 49-year-old Craig Tamanaha was captured on camera moments after pulling down his pants to show his privates to members of the media on the first day of the high-profile trial of Jeffrey Epstein’s former girlfriend. (https://bit.ly/3lQ1CNr)

Each year, about 24,000 Americans are injured by a cigarette.

China has told the United States it will "pay" for its diplomatic boycott of the Beijing Winter Olympics on human rights grounds. The White House announced it would not send any government officials to the Games in February 2022, due to "ongoing genocide and crimes against humanity in Xinjiang and other human rights abuses.” (https://nbcnews.to/31Ebp2n)

A new report claims Israel will not boycott the Chinese Winter Olympics. (https://bit.ly/3lPXJZ1)

A fire-damaged Palm Coast lawn belongs to a man who says he's lucky to be alive. Deputies say his ex-girlfriend, Melanie Botts, attacked him. "She poured gas on me!" he said. "Said she was going to light me on fire and burn my house down!" The man, who asked not to be named, says it all happened quickly. Then he went in the house and says he saw the burning gas can on the kitchen counter. Deputies showed up and say they helped put out the flames. Shortly after that, deputies say Botts called them about a different incident and waited for them to show up. Deputies put the handcuffs on Botts. Fortunately, the victim wasn't hurt. Deputies say it's not clear what led up to the attack. Botts was already on probation in a felony case and was placed under arrest for battery, criminal mischief, and arson. (https://bit.ly/3pFDIFC)

A 21-year-old man pleaded guilty Wednesday and was immediately sentenced to eleven years in prison for his part in a drive-by shooting at an Anaheim strip club on Halloween 2020 that injured four people. Juan Jose Acosta-Soto pleaded guilty to four counts each of attempted murder and assault with a machine gun as well as a count of discharge of a gun at an inhabited dwelling, all felonies, and admitted sentencing enhancements for furnishing a firearm. Two other co-defendants are awaiting trial. The suspects, who were kicked out of the Sahara Theatre for refusing to wear masks got into a red Toyota Camry and opened fire on the strip club with an AK-47-style rifle about 1:30 a.m. Oct. 31, 2020. Four victims, a mix of patrons and employees, were injured in the shooting. The injuries ranged from minor to moderate. The co-defendants are Edgar Nava-Ayala, 35, and Daniel Ocampo Nava, 23, both of Anaheim. Acosta-Soto was driving the Camry during the shooting. Police recovered the gun used in the shooting as the suspects were arrested. Nava-Ayala is charged with four counts of attempted murder, four counts of assault with an assault weapon, and a count of shooting into an occupied building. He also faces sentencing enhancements for the discharge of a weapon and causing great bodily injury. Ocampo Nava is charged with four counts of assault with an assault weapon and one count of shooting into an occupied building. (https://bit.ly/3dBQD5U)