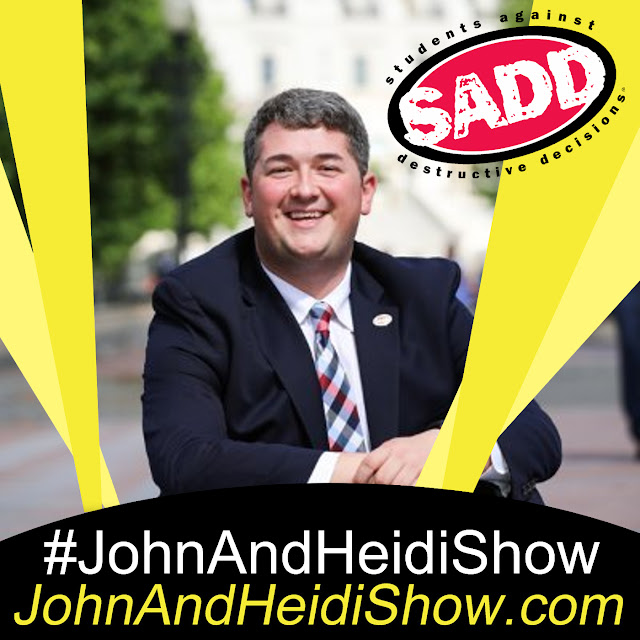 Today we visit with Rick Birt, President and CEO of SADD (Students Against Destructive Decisions) a national organization with a mission to empower and mobilize students and adult allies to engage in positive change through leadership and smart decision-making. Their vision is for all students to collaborate to create a healthier and safer world, one positive decision at a time.

A study reports men tend to behave better when they’re married — both because marriage likely helps improve their behavior, and nicer men are more likely to be married in the first place. The researchers found that men with fewer nasty qualities were more likely to eventually end up married. But among men who did marry, some showed signs indicating that their bad behavior decreased after the union.

A La Porte woman was eventually taken into custody Sunday, December 12th after allegedly hiding from police in a refrigerator. La Porte County Police were dispatched to a residence after a caller hung up after calling 911. Several units arrived in the area shortly after 8:30 p.m. CT where an investigation took place. Police learned that a wanted person was possibly inside the residence. Police say deputies went inside the residence to look for 39-year-old Rabecca Rudd when they found bedding material that was made into a “sheet rope”. It was tied to a light-weight kitchen table and hanging outside of a window. Despite finding this, deputies continued to look inside the residence for Rudd and they reportedly found her hiding inside a refrigerator. Rudd was taken into custody and transported to the La Porte County Jail. Police say she was served with three different arrest warrants for misdemeanor charges of battery, criminal mischief, and possession of paraphernalia. She remains housed in the La Porte County jail and is being held on a $105 cash-only bond through La Porte Superior Court IV and a $305 cash-only bond through La Porte Superior Court III. (https://bit.ly/3m843eK)

Betty White is about to celebrate her 100th birthday. (https://bit.ly/3H2OU6k)

Fox has canceled its New Year’s Eve Celebration hosted by Joel McHale and Ken Jeong due to fears of omicron. (https://nbcnews.to/3J9kXDx)

KFC is giving fans a chance to win a 3-night stay at a KFC themed log cabin in Kentucky. (https://yhoo.it/32ogNGW)

A suspected UK house burglar was left bloodied and beaten after a fist-fight with the homeowner. When officers took him into custody, the burglar had two black eyes and needed stitches. He got in the first punch, but after that, the homeowner laid into the burglar. It wasn’t a fair fight — the homeowner works as a personal trainer and specializes in boxing and kickboxing.

Which lane to choose at the grocery: the one with one shopper checking out a huge cart of items, or the one with four shoppers — each with a dozen or so items? Dan Meyer, chief academic officer at math software company Desmos, estimates that in a standard checkout line each item takes three seconds to scan and the rest of the transaction (niceties, paying, etc.) takes 41 seconds. So one overloaded shopper with 100 items will take less than six minutes to be rung up, while four people with 20 items each will take around seven. In other words, says Meyer, you’re better off behind the one customer with the overflowing cart than behind a line of less encumbered express shoppers.

6 percent of women say they sleep in the nude

An Austrian man had no idea how two coins became lodged near his appendix. The 71-year-old discovered the cash when he went for an X-ray after a minor car accident. He thinks he swallowed them when he was a kid but can’t remember swallowing the coins.

From allegations of cursing the king’s ships, to shape-shifting into animals and birds, or dancing with the devil, a satanic panic in early modern Scotland meant that thousands of women were accused of witchcraft in the 16th-18th centuries with many executed. Now, three centuries after the Witchcraft Act was repealed, campaigners are on course to win pardons and official apologies for the estimated 3,837 people – 84% of whom were women – tried as witches, of which two-thirds were executed and burned. After a two-year campaign by the Witches of Scotland group, a member’s bill in the Scottish parliament has secured the support of Nicola Sturgeon’s administration to clear the names of those accused, the Sunday Times reported. The move follows a precedent by the Massachusetts House of Representatives in the US that proclaimed victims of the Salem Witch trials innocent in 2001. Scotland’s indefatigable pursuit of witches between 1563, when the Witchcraft Act was brought in, and 1736, when it was finally repealed, resulted in five “great Scottish witch-hunts” and a series of nationwide trials. With witchcraft a capital crime, the convicted were usually strangled to death then burned at the stake so as to leave no body to bury. Many confessed under torture, which included sleep deprivation, the crushing and pulling out of fingernails, and pricking of the skin with needles and bodkins to see if the accused bled. (https://bit.ly/3smMJqe)

MOMENT OF DUH: Brought to you by BetterCreditCards.com

A man from Mississippi is facing up to five years in federal prison after admitting to shining lasers at planes flying into the Memphis airport. 52-year-old Eugene Conrad pleaded guilty in court earlier this week, federal prosecutors announced Thursday. The Federal Aviation Administration (FAA) first notified the FBI’s Memphis Field Office of the laser strikes on July 15th, having recorded 49 reports of laser strikes between Jan. 1st and July 15th. The incidents mostly concerned FedEx planes. Agents conducted an investigation the next day, at which time the Memphis International Airport reported yet another laser strike. The laser activity stopped before agents could identify the source. Weeks later on August 11th, the Tennessee Bureau of Investigation used an aircraft to investigate more laser activity from the area, this time narrowing down the source to Benton County, Mississippi. Agents soon arrived at a residence to find Conrad “walking around a house while lasering the plane.” He admitted to shining the lasers at incoming planes for “several months,” federal prosecutors say. Conrad now faces up to five years in prison without parole, followed by three years of probation. He’s may also be ordered to pay a $250,000 fine. His sentencing is scheduled for March 10, 2022. The FAA, meanwhile, continues to warn against shining lasers at aircraft following increasing reports of incidents in 2020 (and despite fewer actual planes in the sky). https://bit.ly/3qcE72y

Education is the key to unlock the golden door of freedom. - George Washington Carver

GOOD NEWS: Brought to you by www.GMDVacations.com

Someone Put $180,000 In A Cardboard Box And Sent It To A College Professor
https://www.sunnyskyz.com/good-news/