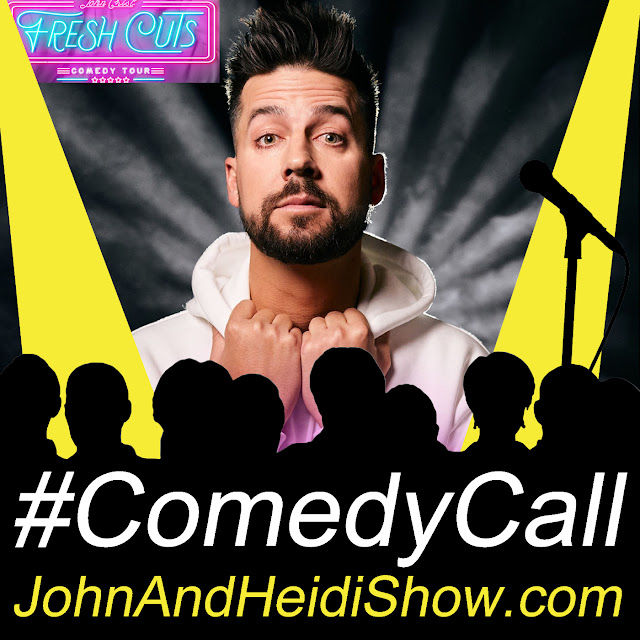 Today we have a #ComedyCall with the very funny comedian John Crist. He is currently on his 2022 stand-up theater tour, The John Crist: Fresh Cuts Comedy Tour. http://johncristcomedy.com/tour/

Crist’s 2016 debut comedy special I Got Questions is available on Amazon Prime. https://amzn.to/3FM8HGf

Over the past year, he's gone viral with videos like “Brands that need to be CANCELLED” “Weatherman MELTS Down on live TV,” and “Every Parent at Disney,” which have helped him garner over1 billion views online and over five million fans on social media.

Studies show housework is the third-leading cause of arguments between married couples, right behind money and sex. In her book The Truth About Love, relationship consultant Pat Love offers a few tips on getting your man to carry a larger share of the load.

• DO stop picking up after him. After stepping on his dirty socks and underwear for a week, he’ll get the idea that they will stay on the floor until he picks them up.

• DO praise him when he does well. Like well-trained dogs, positive reinforcement is the key to getting the behavior you want from your man.

A study says that people who go to bed earlier have fewer worries.

Do you get “price tag pride” when you find a great deal? Research found that 55 percent of us are proud to brag when we’ve nabbed a sales item, while 27 percent get such a buzz that they can’t wait for their next “bargain hit”.

'Drunk' Missouri woman is arrested after she ran onto the tarmac after missing final boarding call for her Spirit Airlines flight in Phoenix. Vickie Meyers, of St. Louis, Missouri, was arrested at Sky Harbor Airport in Phoenix on Sunday for running onto the tarmac. The 53-year-old woman told police she had been reportedly drinking and was not sure of her flight time and made a run for the Spirit Airlines airplane. Meyers failed to get through a closed gate door and then opened an emergency door before she ran down a flight of stairs. Airport crew workers were able to stop and held her until the police arrived. Meyers was arrested and charged with trespassing. https://www-dailymail-co-uk.

Lori Loughlin was the victim of a home robbery earlier this month. On Jan. 3, a group of masked thieves broke into the LA-area home owned by Loughlin and her husband, Mossimo Giannulli. Based on security camera footage, the group of men, who wore all black, broke the couple’s bedroom window to get inside. They swiped the Full House actress’ jewelry box, which contained pieces valued at $1 million. -PopCulture

“Jeopardy!” is in no ratings jeopardy at all, 14 months after the passing of longtime and beloved host Alex Trebek. For the week of Dec. 27, the quiz show surpassed “60 Minutes” to become the most-watched non-sports program on TV, according to Nielsen numbers. It’s not only the first time this season that has happened, it’s the first time in at least 3 decades. -TheWrap

Unbelievably, Google is no longer the most-visited website in the world. According to Cloudflare Radar’s popularity ranking, in late 2021, the search engine was officially been knocked off the top spot. The new champ is none other than video-sharing app TikTok. It first emerged as the most popular website on Feb. 17, but that only lasted for one day. It again rose to #1 in March and it stayed on top for a few more days. The same happened in May, and after Aug. 10, TikTok was the most popular domain most days – also passing fellow social media platforms such as Facebook. Cloudflare puts the top-10 websites in popularity for 2021 in this order, following TikTok, Google and Facebook: Microsoft, Apple, Amazon, YouTube, Netflix, WhatsApp and Instagram.-LADBible

Even with regular visits to the dentist, children from richer families are more likely to experience tooth decay, according to the first meta-analysis of its kind. The systematic review of 65 studies conducted in 30 countries suggests the corrosive effects of soda, juices, and energy drinks have eaten away at some of the privileges provided by wealth and education. Among adolescents who attend private school and whose parents have higher levels of education and income, tooth wear was discovered to be significantly worse. Dental researcher Khaled Ahmed of Griffith University in Australia says although this might sound counter-intuitive since teens from affluent families are more likely to have access to regular dental care, the truth is, “Fizzy drinks, energy drinks and packaged juices are in many countries available to the affluent” and these people “may be more frequently exposed” to sugar-based drinks and foods. -ScienceAlert

50% of us have a real problem with our food touching other food on the plate while eating dinner.

Unlike dogs, pigs, and some other mammals, humans cannot taste water. We taste only the chemicals and impurities in the water.

No matter how cold it gets, gasoline will not freeze.

A man in Singapore was sentenced to prison after posing as a female flight attendant to pick up men in nightclubs and then rob them. The man dressed in women’s clothes, called himself Michelle, and stole credit cards, cash and phones from the men while they were asleep.

Thanks to the pandemic, dude ranches and hunting camps had another big year in 2021. A few years back many of them started adding heavyweight horses and super-large saddles to seat swelling numbers of over-sized clients. With the Centers for Disease Control and Prevention reporting that over 40 percent of U.S. adults are obese, Western wranglers and outfitters say they are doing all they can to accommodate the widening of waistlines and other anatomical areas. Non-existent 30+ years ago, plus-sized saddles are now often used.

THINGS REMOVED FROM BODY ORIFICES IN 2021
The annual list of foreign objects that required medical intervention to remove from human bodies is out.

“I haven’t spoken to my wife in years. I didn’t want to interrupt her.” - Rodney Dangerfield

Anonymous Customer Purchases Guitar For Kid Who Frequented The Store Just To Play It. https://www.sunnyskyz.com/good-news