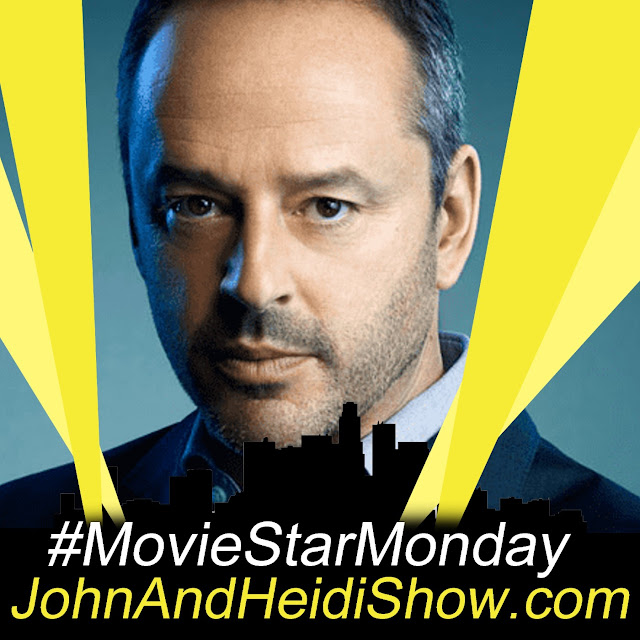 This #MovieStarMonday we visit with Gil Bellows (Shawshank Redemption, Smallville, Bones, Ally McBeal) We're gonna talk about his new film TWO DEATHS OF HENRY BAKER available NOW On Demand, Digital and DVD. A taut, edge-of-your-seat thriller. Gil Bellows stars in this gritty contemporary western centered around a treacherous rivalry between two brothers and their gold. Check out the trailer - https://www.youtube.com/watch?v=qqJjiTpQ394

Taking more time to enjoy your food may also help you avoid obesity. Researchers in Japan found that chewing more leads to the human body expending more energy and increasing the metabolism of food in the digestive system. The new study, conducted at Weseda University, reveals that oral stimuli, which has a connection to tasting food, and the amount of time spent chewing both play a role in increasing how much energy someone uses while they eat. As a person chews their food longer, the body uses more energy. This increases metabolism and intestinal motility, which leads to more heat generation by the eater after their meal. While the difference in energy expenditure is small, the scientists say that the cumulative effect over multiple meals each day during the course of a year, is substantial.

A study claims that people are more likely to cry at night because lack of sleep makes emotions hard to control.

A study found that marijuana use in the U.S. has nearly tripled in the last decade.

A grandmother is facing charges after Memphis Police say she was driving a truck while drunk with her 2-year-old grandson unbuckled inside. Claudia Patterson is charged with child abuse and neglect, and several DUI-related charges. WREG discovered Patterson has been arrested for DUI multiple times. Sunday night, a Memphis Police officer headed to a call noticed a speeding truck at the intersection of Sycamore View and Raleigh Lagrange. The officer pulled over the truck and found 51-year-old Patterson behind the wheel. He said she stumbled out of the truck, smelling faintly of alcohol. He looked inside the truck, saying in a report it was in “disarray.” When the officer asked for a drivers license, Patterson said she didn’t have one. She was taken into custody. https://wreg.com/news/local/memphis-grandmother-accused-of-driving-drunk-with-2-year-old-in-truck/

A federal judge has dismissed a lawsuit against Netflix brought by a grieving California father who said the TV show “13 Reasons Why” was to blame for his 15-year-old daughter’s death by suicide in April 2017. He accused Netflix of using sophisticated algorithms to “target highly vulnerable children,” including his daughter Bella Herndon, and alleges that kids were “directly manipulated” into watching dangerous content. Netflix disputed the accusations, saying in court filings that restrictions on programming would result in self-censorship. Bella’s father said he plans to appeal.

After nearly 2 months off, the cast and crew of “Black Panther: Wakanda Forever” are set to resume production this week on the Marvel mega sequel. Letitia Wright, who plays ‘Shuri’, was injured in an incident with a stunt rig in August during an overnight shoot in Boston. When the delay in production was announced in November, Marvel brass also revealed that her injuries were worse than previously thought, including a fractured shoulder and concussion. During a shift of several Marvel Studios titles, Disney moved the Black Panther sequel’s release date from July 8 to November 11, 2022.

Fact: “Chillax” and “whatevs” are now actual words in the dictionary.

Applying vodka on your face cleanses the skin, tightens pores and can prevent acne breakouts.

As the world increasingly accepts the fact that we’ll someday soon live in a world where all vehicles are powered by electricity, car-maker Audi has debuted an “electric vehicle charging hub” that experts say is a taste of the future. The facility, which opened at the end of 2021 in Germany, features 6 quick-charging stations at ground level, built from “second life” batteries recovered from dismantled cars. It also uses solar panels and a standard electrical connection to provide enough juice to “fill” 80 cars per day. It takes about 23 minutes to charge a car from 5% to 80%, during which the driver can while away the time in the lovely lounge upstairs. Audi offers on-time food delivery and vending machines, plus mobile car care. Service staff look after customers in the 200 square meter (2,150 sq. ft.) lounge, which also has a patio. There they can work and relax. On a 98-inch screen, Audi models can be configured or information about the Audi charging hub’s functionality or a car’s current charge level can be retrieved. The lounge also features an electric scooter lending service, information about various Audi products, and test drives of the latest Audi vehicles.

Teachers shared with reddit.com the most questionable questions they’d ever been asked.

• What are those pyramid-shaped things in Egypt called?

• If the patient a has a brain hemorrhage, can we tie a tourniquet around the neck to stop it?

The word ‘facetiously’ contains all 5 vowels and the letter “y” in alphabetical order.

Kangaroos can not back up.

On average, 3 people die each year from using their tongue to check if a battery works.

Police in China caught a man suspected of stealing $2,190 in lottery scratch-off tickets and then trying to claim a prize.

A castle in Scotland said to be haunted by Sir Andrew — aka the Baron of Earlshall, who lived in the home in the 17th century — is up for sale with no particular asking price. Over the years, visitors of the castle have claimed to have heard the footsteps of Sir Andrew, who goes by the nickname “Bloody Bruce.” Sir Andrew lived in the home in the 17th century. Owners and visitors of the home say they hear the footsteps of Bloody Bruce on the spiral staircase in particular. The Baron earned his nickname following his brutal victory at the Battle of Killiecrankie in 1689 during the Scottish Jacobite uprising. He hacked off the hands and head of Covenanter Richard Cameron when defeating him in battle, according to the Savills website, which represents the listing. After Bruce’s direct male line died out in 1708, the castles were bought and sold to different individuals throughout the years. The current owner purchased the estate back in 2019. The castle was built in 1546 by Sir William Bruce, a famed architect at the time — with no relation to Bloody Bruce. It was later restored and renovated by Scottish architect Sir Robert Lorimer in the 1890s. The castle is made up of 10 bedrooms, eight reception rooms, two dressing rooms, six bathrooms and three cottages across the grounds. Situated on 34 acres of land, features include the original granite fireplace in the Great Hall, coats of arms of European royalty and Scottish noble families, decorative ceilings and wood panelling, and exposed stonework. Many of the windows throughout the historic property were installed for defensive purposes, with musket loops and smaller windows located in strategic places in case of attack. High-profile visitors include Mary, Queen of Scots and James I of England.

ARCHAIC WORDS THAT USED TO BE COMMON:

➢ apothecary: a person who prepared and sold medicine

➢ gadzooks: an expression of surprise or annoyance

➢ sweetmeat : an item of confectionery or sweet food

➢ yoke: the amount of land that a pair of oxen could plough in a day

➢ zounds: an expression of surprise or indignation

“I’m not insane. My mother had me tested.”