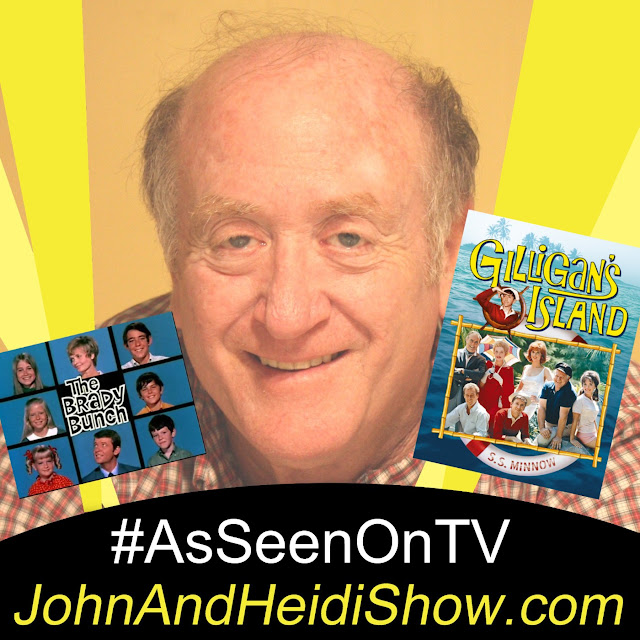 Today we visit with TV producer, writer, Lloyd Schwartz. TV executive, and the writer and producer of The Brady Bunch and Gilligan's island. (his dad Sherwood Schwartz created THE BRADY BUNCH and GILLIGANS ISLAND)

Lloyd produced and wrote many other shows as well and has written 40 stage plays. In addition to producing and writing both shows Lloyd has been involved in all things Brady Bunch, including the recent show on HGTV.

His new play called CLASSIC COUPLES COUNSELING opens in Los Angeles April 1, 2022 until May 6th, this play is being considered for a Broadway run!

Show info and tickets at https://theatrewest.org/

Research shows that running more than 30 miles a week can cause heart disease.

A study says that men are more likely to lose their memory if they’ve been drinking heavily.

A study has concluded that people who spend too much time online can develop severe mental health problems, including stress, sleeping disorders and depression.

Montgomery County Police arrested six men Tuesday on drug trafficking conspiracy charges. The unsealed criminal complaint federally charged the men, who were allegedly distributing cocaine and other drugs in Montgomery County, Prince George’s County, and elsewhere in the D.C.-area. The men are all Maryland residents and range in age from 27 to 43. The men were arrested on Jan. 20 and as a result, law enforcement moved forward with search warrants for 21 locations associated with the organization. Officers seized approximately 22 kilograms of cocaine as well as a dozen weapons, including a "ghost gun" and a rifle. Ghost guns are homemade weapons, which are assembled from parts purchased online and are therefore untraceable due to the lack of serial numbers.

Pete Davidson and Colin Jost have purchased an old Staten Island ferry — and, no, it’s not for a “Saturday Night Live” bit. The Staten Island natives have been revealed as the mystery buyers of the out-of-service passenger ferry that was once operated by the New York City Department of Transportation. The ferry, named the John F. Kennedy, which had been retired from service, went up for auction last week. The pair, who purchased the boat for about $280k, plan to turn it into a “live entertainment event space”. -Yahoo

“America’s Funniest Home Videos,” the family TV institution that Bob Saget helped launch in 1989, will pay tribute to its original host for the rest of season 32 with a regular segment showcasing memorable moments from his time on the ABC series. AFV already honored Saget in its Jan. 16 episode, a week after his death at the age of 65, but executive producer Vin Di Bona decided last week that there is too much prime PG-rated Saget material in the vault from his 8-year run not to share more on the air. -Yahoo

‘Baby Shark’, the inescapable earworm beloved by some children and sometimes dreaded by their parents, has hit 10 billion views on YouTube. Not only is it the most-viewed video on the platform, a record it set in November 2020, it’s now the only video to reach 10 billion views. The kids’ song, masterminded by South Korean educational company Pinkfong and performed by singer Hope Segoine, debuted in 2016, but didn’t jam itself into North Americans’ collective consciousness until 2019.

Police in Poland said a woman accused of driving 91 miles per hour in a snowstorm said she was late for an appointment to have a new car stereo installed.

A study found that if you only get exercise on the weekend, you’re still in as good as shape as people who exercise every day.

NASA accidentally erased the original tape of the first steps on the moon.

Camels store water their bloodstream, not their hump, which is fatty tissue.

Billy goats try to attract a mate by urinating on their own heads.

During the entire run of the “Gilligan’s Island” TV show, it was never revealed if “Gilligan” was his first or last name.

A man in Brazil locked his parents up in their bedroom so that he and his girlfriend could be alone. The parents called the fire department, who broke out a window to get to them.

Hong Kong residents are rebelling against a proposed cull of the city’s pet hamsters. After enduring, and largely complying with a series of extreme and often baffling pandemic rules, when a cull of 2,000 pet hamsters was announced, a line was crossed. An ‘underground railroad’ has emerged to save abandoned hamsters, with foster carers taking them in and concealing them. ‘Resistance fighters’ have created groups to share updates, drawing on methods used in anti-government protests in 2019. Nearly 3,000 have volunteered to house affected hamsters. And on social media, concerned residents shared photos of abandoned hamsters in the hope of enlisting rescuers, who say the government’s plan is rooted in knee-jerk panic rather than science. Officials said the rodents could carry the coronavirus, and transmit it to humans.

Employees were surveyed about which of their co-workers behaviors were making them cringe. Some of the juicy results:

• “Every single day one of the other teachers pops a bag of microwave popcorn in our communal kitchen, eats it, and then rips open the bag and thoroughly licks out the inside.”

• “Clipping your fingernails during a meeting! My boss runs a pretty successful hedge fund, so he thinks he can get away with it. But it makes me shudder.”

• “One of my co-workers apparently feels so rushed she frequently takes both her laptop and food into a bathroom stall. You can hear her in there chomping on an apple, typing, etc.”

“There are only three ages for women in Hollywood: babe, district attorney and Driving Miss Daisy.”