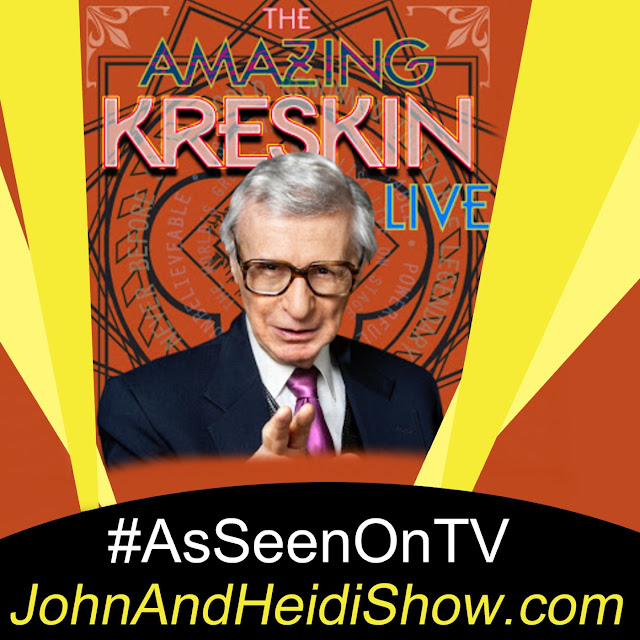 It's brand new year... and we have the opportunity to take a little peak ahead with The AMAZING Kreskin! He's a mentalist who has preformed for millions. He has numerous books out with a NEW fun book available now! The Adventures of the Amazing Kreskin - https://micropublishingmedia.com/books/shop/the-adventures-of-the-amazing-kreskin/

In a poll of 2,000 sexually active adults, almost 7 in 10 people plan to get intimate in their childhood home or parents’ house as they return for the holiday season. (https://bit.ly/3piurUW)

In Marathon, Florida an officer noticed a man weaving in and out of traffic without using his turn signal. He was pulled over and a K-9 officer alerted to drugs in the vehicle. A quick search found 6.1 ounces of cocaine under the hood and $3000 in cash in the car. Busted! He’s currently being held without bond on a felony charge of cocaine trafficking.

HBO Max’s Gossip Girl reboot has yet to address the biggest mistakes of the original series, despite numerous callbacks to its predecessor in season 1. Both versions of the show focus on a mysterious blogger who chronicles the lives of rich teenagers on the Upper East Side, exposing their secrets for the amusement of her followers. Although the reboot has some distinct differences, it never strays too far from the series that came before it, clearly aware of the impact that it had. However, this strict adherence brings with it its own problems that the new is, so far, failing to address. The original Gossip Girl, which ran from 2007 to 2012, was a cultural phenomenon, and the reboot has used this popularity to its advantage since it was first announced. One of the breakout teen dramas of the 2000s, Gossip Girl was a constant source of controversy, a glamourous and dark depiction of the sex, lies, and scandals of the wealthy elite. Most of the show’s drama came from the characters doing horrible things to each other, toeing the line between idolizing this behavior and criticizing it - often picking the former. https://screenrant.com/gossip-girl-reboot-fix-original-show-mistakes/

According to old traditions…
• The first words you hear in the minutes of the New Year will set the precedence for the entire year.

• Do something you are good or successful at on New Year’s Day — especially if it’s work related. This will tell how the rest of the New Year will go.

• Any baby born on New Year’s Day has good luck the rest of his/her life. The baby also brings good luck to the family.

• No money should be spent (that would be going out).

• No sweeping or dusting the first day of the year. The good luck could be swept out. If you have to sweep, you should sweep towards the center of the house and use a dust pan. (Some cultures “sweep out” the old year.)

• No crying January 1 or you will be crying all year long.

Cleopatra’s life was closer in time to the space shuttle than to the building of the Pyramids.

A Japanese billionaire, his producer, and a Russian cosmonaut safely returned to Earth after spending twelve days on the International Space Station.(https://fxn.ws/3pf0HrX)

An Alabama woman’s trip to T.J. Maxx ended with a trip to the hospital. Opelika Police on Monday responded to a reported accidental discharge of a firearm at the Tiger Town Outdoor Center store, about 25 miles northeast of Tuskegee, according to a Facebook post by the department. Authorities found the 55-year-old woman, whose name has not been released, suffering a gunshot wound to her foot upon their arrival. The woman had accidentally dropped the gun, causing it to discharge and strike her foot, said police. She was then taken to the hospital for treatment. Her current condition was not mentioned in the post. Police said the scene was cleared following their investigation, but did not detail what had preceded the incident. (https://bit.ly/3ph3LEd)

• People are happier when they’re kept busy. It keeps them feeling positive.

• Chocolate discharges the same chemical in your body as when you feel love.

• A 20 second hug releases chemicals in the body that help you trust the one you’re hugging.

• The brain feels rejection as pain.

• Your mind wanders about 30 percent of the time.

“I’m sick of following my dreams, man. I’m just going to ask where they’re going and hook up with ’em later.” - Mitch Hedberg