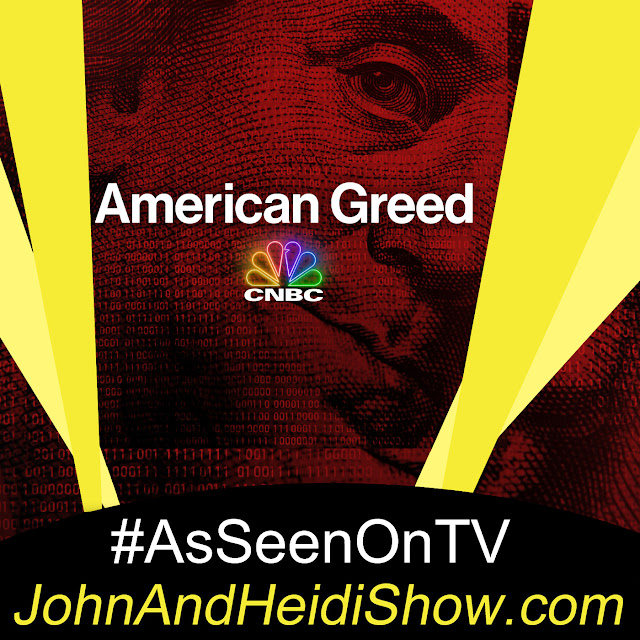 Stacy Keach, one of America's finest Shakespearean actors. You know Stacy as Mike Hammer and from TV and movies like Prison Break, The Bourne Legacy, The Long Riders, Fat City, The Ninth Configuration, Titus, American Greed, Cheech & Chong’s Up in Smoke and much more!

Stacy hosts CNBC’s longest-running prime time original series, “American Greed” They are back for a momentous 15th season on Wednesdays at 10pm ET/PT. They just aired the 200th Episode! https://www.cnbc.com/american-greed/

A study found rhinos use the chemical makeup of their dung to tell other rhinos their gender, age and whether they’re looking for a hookup.

According to a survey of travelers’ habits, men are more likely to lock themselves out of their rooms while naked than women are. They say it’s usually men who wake up in the middle of the night needing to go to the bathroom really badly and in their hurry get the doors mixed up.

A study says older people will sleep better if they exercise moderately.

A study says the calories listed on a menu are usually undercounted. There are really far more.

NBC has announced plans to air the special Celebrating Betty White: America's Golden Girl on Jan. 31. The program will be available to stream on Peacock the following day. The Emmy, Grammy and Screen Actors Guild Award winner died Dec. 31 at the age of 99. She was best known for her iconic roles on Hot in Cleveland, The Mary Tyler Moore Show and The Golden Girls. She was also a tireless advocate for animals.

Dining with other people could make someone eat less, a scientific study suggests. That is because the same part of the brain involved in social engagement also controls food cravings.

A report claims that eating large amounts of chocolate could improve your memory.

According to a study, watching TV can make you a better person.

Vincent Van Gogh only sold one painting when he was alive, and died completely broke.

The scientific term for ‘Brain Freeze’ is “sphenopalatine ganglioneuralgia”.

Face coverings have become a very normal accessory over the last 22 months, but did you ever think that they could actually make you more attractive? A new paper out of Cardiff University shows that yes, you’re actually more appealing to others when you’re wearing a face covering. (Sorry about that…). Researchers found that the simple disposable blue masks in particular “increase facial attractiveness more than other face coverings”. In the study, men were perceived to be more physically attractive when wearing a mask than without one. A study where women in masks were rated has yet to be released, but is said to have yielded the same results. One professor at the school said: “the pandemic has changed our psychology in how we perceive the wearers of masks.”

It's scientifically proven: being in love makes you a less productive person.

41% of people can clearly remember the license plate number of their first car.

Firings and layoffs occur more often in the first week of the New Year than at any other time.

In Prague, three security cameras kept an eye on the street 24 hours a day. At least they did until the cameras were stolen. To make things worse, no one noticed they were gone for three days until a maintenance man looked up and saw they were missing. To top things off the $15,000 cameras had been right in front of a police station — and they were transmitting to police headquarters at the time they were stolen.

You may not know this, but Japan is home to the world’s most advanced toilet systems, with several manufacturers competing to deliver all sorts of outrageous features such as built-in wireless internet, or the capacity to remotely collect and analyze urine samples, and then send the results to a pre-selected hospital. To find out what people want and thus remain competitive, toilet seat manufacturers in Japan routinely carry out surveys that reveal some weird and interesting information. For example, the results of one survey recently revealed that most Japanese men urinate while sitting down.

• Girls Scouts is preparing for its 2022 cookie-selling season with its Cookie Finder, a tool that allows users to search for nearby boxes of Thin Mints or Samoas by typing in their zip code to find availability. The Cookie Finder is also available to download as a mobile app.

• Although Girls Scouts hasn’t officially announced the start date for the season, last year it kicked off on February 1, though exact timing can vary by location.

• Per tradition, Girl Scouts will release a new cookie this year. Titled Adventurefuls, the Girls Scouts website describes them as “brownie-inspired cookies topped with caramel flavored crème with a hint of sea salt.”

• In 2021, Girl Scouts debuted a variety of new initiatives to help sell and deliver cookies during the pandemic, including online ordering and delivery with Grubhub.

“I’m not superstitious, but I am a little stitious.”
Michael Scott (Steve Carrell), The Office

A boy with autism celebrated his “best birthday ever” even after no-one RSVP’d to his party. Harry, of Chesterfield, England, wanted to go bowling for his 11th birthday party, but struggled to get anyone to come. Frustrated, his mom Hannah took to social media. Soon after, she was inundated with messages asking if they could send Harry a birthday card. She was “overwhelmed” by hundreds of cards, some coming from as far as Dubai, Texas and New Zealand. Harry even got his birthday party after all. People offered to bring their children to his bowling party, and there were enough attendees to fill 2 lanes, more than originally planned.