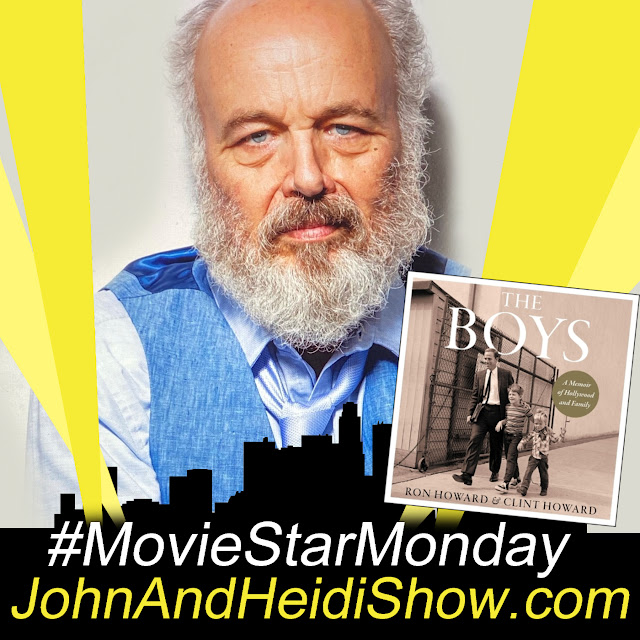 This #MovieStarMonday we visit with AMAZING actor Clint Howard. Gentle Ben, Apollo 13, Austin Powers, Ed TV, Water Boy, Solo and many more movies and TV shows. He and his brother Ron Howard have a new book out.

The Boys: A Memoir of Hollywood and Family - https://amzn.to/3AUE6oW

National Send a Card to a Friend Day

A study found that despite what most people say about seeking a wider circle of friendship (say, in a large college setting, where there are a lot of different types of people available), they typically befriend only those most similar to themselves. Researchers found that students at a huge state school tended to spend time with people who were much more similar to them than students at the small, rural colleges.

According to a study, teenagers who eat dinner with their families have better mental health than those who don’t.

A survey of bar managers in the U.S. found the Margarita remains the most popular mixed drink nationwide. The Martini and Rum and Coke got second and third spots.

The Pillow Fighting Championship crowned its first ever champions Saturday night in Florida, as the children’s pastime was turned into a professional combat sport. The pay-per-view event saw 16 men and 8 women, most experienced in MMA or boxing, but this time competing using a specialized pillow, advance through a bracket style competition. On the women’s side it was Brazilian Istela Nunes who emerged as champion, and the men’s final saw American Hauley Tillman defeat countryman Marcus Brimage. Each winner earned a title belt and $5,000.

Simon Cowell has done it again. He crashed his e-bike and landed in hospital with broken bones. Sources say he was tooling around on the bike in London when he turned a sharp corner . . . or at least tried to. The road was wet and the tires went out from under him and he crashed to the ground. According to reports, Cowell broke his left arm and badly bruised his cheek, but is “absolutely fine”, and now recovering at home. This isn’t the first time Cowell has been hospitalized following an accident on an electric bicycle. In August 2020, he broke his back and required surgery after testing out his bike at his home in Malibu, California.

A 105,000-square-foot mansion in Bel Air could become the most expensive property to sell in the U.S. It’s listed for $295 million.

A New Mexico legislator wants movie actors and other film-set professionals to undergo state-sponsored gun-safety training. In October, cinematographer Halyna Hutchins was fatally shot by Alec Baldwin with a weapon that he says he believed was loaded with dummy ammo. On Monday, a bill was introduced by Sen. Cliff Pirtle that would require all acting and film production personnel where firearms are present to complete a safety course offered by the New Mexico Game and Fish Department that is designed primarily for hunters.

Dale Earnhardt Jr. is using his retirement to pursue something new. The famed NASCAR driver has announced that he and his wife Amy are dropping their very own vodka, affectionately named High Rock. Distilled and bottled by Sugarlands Distilling Co. from the Great Smoky Mountains in Gatlinburg, Tennessee, the booze will be available in stores near you sometime this spring, although there hasn’t been an official release date yet.

Male monkeys lose the hair on their heads in the same way men do.

On some Caribbean islands, the oysters can climb trees.

Nike Air sneakers have been made out of straw, crocodile skin, and 18-karat gold.

The human body glows in the dark, but the light emitted is too dim for our eyes to see it.

The California Highway Patrol responded to a report of an animal wandering down a road in Fresno on Monday. It was caught with an assist from a neighbor and returned safely home. The animal was a water buffalo. After calling in and reporting the water buffalo, a resident and an officer managed to steer the fully-grown bovid into a fenced-in area and alerted its owner.

KIDS’ ALTERNATIVE NAMES FOR THINGS
Watching kids learn about the world is nothing short of entertaining. Like when they don’t have the correct term for something and they just make up their own alternative. People shared the alternative names kids use for things.

• We still use the term ‘rainbrella’ in our house even though said son is now in his 30s.

• Last night my 4-year-old said a prayer for all the people in the world including “Africa, Asia and Syrup.”

• When my guy was 3 he named coffee grounds “bean dirt”

• My kid says what she misses most about going to movies is getting snacks from the “confession” stand.

• My child has been carrying a small notebook around all day. She opens it, writes small scribbles and quickly closes it back up. She’s calling it her “secret diarrhea”.

Cheryl: “That’s a tough one. I’d have to say April 25. Because it’s not too hot and not too cold. All you need is a light jacket.”