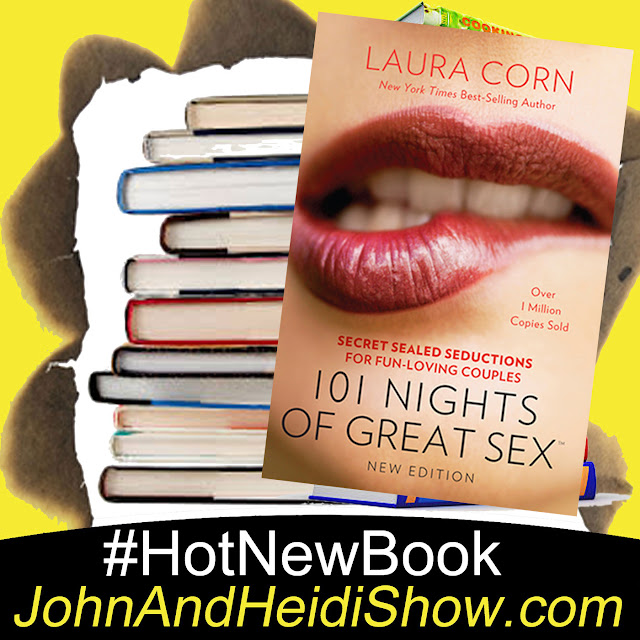 Today we visit with Laura Corn, author of the NY Times Best Seller, "101 Nights of Great Sex". This is the PERFECT time to visit with here, leading up to Valentine's Day. The book has sold MILLIONS of copies and has RAVE REVIEWS from some pretty impressive people! - https://amzn.to/3otseVV


Research shows that guys who are really good at video games have a region of the brain that’s larger than usual.

One in five people in a live-in relationship admit to “financial infidelity” — keeping a private bank account or credit card without telling a partner, according to a study. The survey found 31 percent of millennials, 24 percent of people ages 38 to 53 and 17 percent of baby boomers have at some point had an account they keep secret from a partner. People in relationships often have good reason to hide their financial issues: People can judgmental: 40 percent of Americans saying they wouldn’t date someone who had a bad credit score. Women were nearly three times as likely to consider credit score a major influence on a potential partner compared to men (20 percent versus 7 percent). More than half of Americans would not marry someone with significant debt.

A YouTuber has entered the Guinness Book of World Records after creating the world’s first retractable “lightsaber”. Alex Burkan, who runs the YouTube channel Alex Lab, created a device that looks much like the lightsabers of “Star Wars” fame. It can produce a 1-meter (3.3-foot) long plasma blade when initiated. And it’s far from just a fancy torch, the 2,800°C (5,072°F) blade can cut through steel. Next on Alex’s agenda? He’s designing an ‘Iron Man’ suit. LINK: https://youtu.be/RSSAhmmiZjM

Yellowstone wrapped Season 4 in early January and eager fans are already clamoring for more. In a new interview, Executive Producer David Glasser reveals that plans for Season 5 are already well underway. Glasser says he expects shooting for Season 5 to begin in May with the show to return in the fall of this year.

Actor, comedian and frequent Academy Awards host Billy Crystal will be honored with the Critics’ Choice Awards Lifetime Achievement Award. He’ll receive the award at the gala which will be broadcast live March 13, hosted by Taye Diggs and Nicole Byer. Crystal will be only the 6th star awarded the Lifetime Achievement Award in the history of the CCA. Previous honorees include Lauren Bacall, Kevin Costner, Clint Eastwood, Eddie Murphy and Robert Wise.

The next time you see a car commercial where the driver takes their hands off the wheel — always accompanied by small text telling us not to take our hands off the wheel — keep this story in mind so you don’t go to jail. A Tesla driver in California was charged with two counts of vehicular manslaughter after crashing into another car and killing two people while his car was on autopilot. It appears to be the first time a driver using semi-automated driving technology has been charged with a felony in relation to a deadly crash. State prosecutors filed charges against the driver, Kevin George Aziz Riad, in October, though detailed documents were only recently released. The deadly event unfolded in a Los Angeles suburb in December 2019, when Riad’s Model S sedan left the freeway, ran a red light, and crashed into a Honda Civic. Two of the Civic’s occupants were killed, and their families are suing Tesla and Riad separately from the criminal charges.

Professionals in search of a change of scenery will be rewarded if they give Arkansas a try. The Northwest Arkansas Council is offering remote tech workers and entrepreneurs $10,000 in Bitcoin to relocate to the area. Why Bitcoin?According to the NWA Council’s site, “Northwest Arkansas is experiencing explosive growth in the tech sector, specifically within blockchain-enabled technologies, and this incentive embraces the growing trend of cryptocurrency as a payment option by employers.” The offer is part of the NWA Council’s “Life Works Here” campaign. Initially the incentive was $10,000 in cash, and that option is still available for those who prefer it to cryptocurrency. To date, 35,000 people in more than 115 countries and 50 states have submitted their applications to move to Northwest Arkansas. https://findingnwa.com/incentive/

Nearly 60% of people with a garage, don’t use it for its originally intended purpose.

A former Swiss banking CEO, who is on trial for fraud, says the nearly $280,000 he spent making it rain at strip clubs was a “business expense”. Pierin Vincenz, who used to head Raiffeisen Switzerland, also claimed in court that he spent $760 on dinner with a woman he met on Tinder because he was thinking of hiring her for a real estate job. It is also alleged that Vincenz and a stripper were charged $4,500 by a hotel for damages to a room after a “massive fight.” Vincenz is one of 7 top bankers and associates on trial in Zurich for alleged enrichment, fraud and mismanagement.

A bartender who was robbed at gunpoint has filed a lawsuit against his former employer, who he says forced him to pay back the thousands of dollars that were stolen. Edward Parker was working at The Lodge in Summerlin, near Las Vegas, in Dec. 2020, when an armed man entered, demanding money. Video shows Parker, with his hands in the air, handing over cash from the register. Hours after handing over $3,900, Parker claims management at The Lodge told him he had to pay the establishment back. What’s more, after paying the money back in the summer of 2021, Parker says he was fired after taking a pre-approved vacation.

HOW TO MAKE A WOMAN HAPPY

1. Tell her you love her (of course): Tell her often. She won’t get sick of hearing it. Also, tell her how lucky you feel to have her in your life.

2. Leave cute notes: It may seem very high school, but girls love it when they find a sweet note. You can leave a sticky note on her phone or at the desk, saying something like: “you make me happy”. Her heart will melt and she’ll wear a smile all day long.

3. Cute texts: Send her sweet one-liners or tell her about how much you are looking forward to seeing her. You can send cute, romantic messages or sexy texts.

4. Flowers (of course): Not just for special occasions – a woman loves to get a bouquet anytime.

5. Pamper her: Pick up her favorite food, give her a massage, buy her a spa session or jewellery once in a while.

6. Make her laugh: Women love a man who makes her laugh. If you can do this regularly, you’ve pretty much got it made.

7. Thank her: Think of all she does for you. You cannot imagine your life without her. A thank you will make her day. Women feel special when they are appreciated.

8. Cook for her: Even if you aren’t the best cook in the world, she’ll appreciate the effort . . . and the fact that she doesn’t have to cook that night.

9. Compliment her: Women love compliments, especially from their partner. It could be about her looks, her personality, or something that she does particularly well, like cooking or decorating.

10. Give her hugs and kisses: As long as she is comfortable with it, she’ll probably love to be smothered in kisses and hugs. Especially if she isn’t expecting them.

Allan Baltz and his mullet are making a difference. The 11-year-old, who was in foster care in Jonesboro AR before being adopted in 2015, has the “biggest heart”, according to his Mom. At the start of the pandemic, his family had fun trying out crazy hairstyles, with Allan embracing the mullet. A friend told them about the USA Mullet Championship, and when Allan learned of the $2,500 prize, he decided to win it and give the money to kids in foster care. Well, Allan won the kid’s division in a landslide, and split the prize between two Arkansas nonprofits: Together We Foster and Project Zero. He told a reporter he remembers what it was like to be in foster care, and he’s “just really hoping they get a family.” SunnySkyz, TheWeek