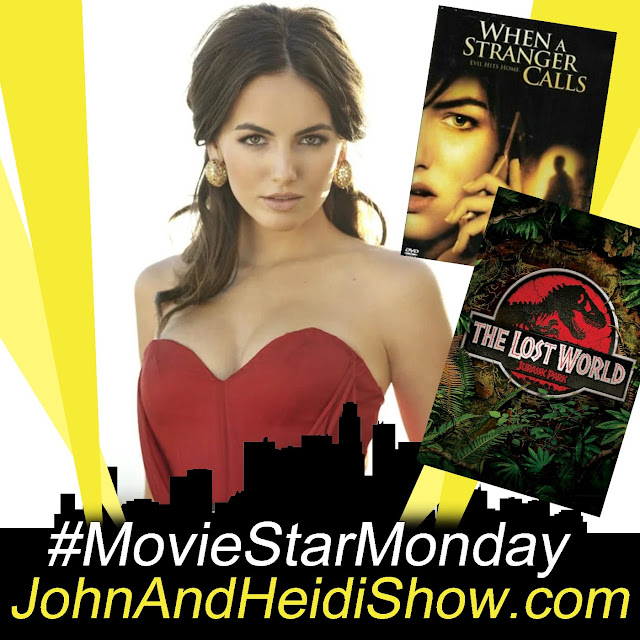 This #MovieStarMonday we visit with CAMILLA BELLE, most recently in Dollface, but also in many other films including Sundown, Diablo,The American Side, Push, 10,000 BC, When a Stranger Calls and Open Road. She was also in Jurrassic Park: Lost World as a young actress.

Her new film 10 TRUTHS ABOUT LOVE, debuted on Tubi just in time for Valentine's Day!

Carina Franklin, a thriving romance columnist, thinks she's got life and love figured out... until her longtime boyfriend unexpectedly breaks up with her. At the same time, Carina's editor hires a new writer, Liam, to work with her and give the column a male perspective. The two clash over their approach and sparks fly. To prove himself, Liam offers to help Carina get her ex-boyfriend back. But, in the process of proving each other wrong, they begin to realize they may be right for each other.

FOX Entertainment's free streaming service, Tubi has an amazing collection for Valentine's Day, which also includes "Crazy, Stupid, Love.," "He's Just Not That Into You," "Forever Young," "500 Days of Summer," "A Walk to Remember," "William Shakespeare's Romeo + Juliet," "Eternal Sunshine of the Spotless Mind," "John Tucker Must Die" and more

Tubi is a free streaming service with over 35,000 titles, all available completely for free, no subscription needed... available on all your favorite devices - smart TVs, on the web, on mobile and more. https://tubitv.com/

National Clean Out Your Computer Day

A survey found that 6 out of 10 people believe angels actually exist.

People are having a hard time calling in sick. Fear of retribution is keeping sick Americans from taking a day off from work. A new study polled 2,000 employed Americans about the stress of taking time off work and found that 58 percent avoid calling out for fear of being criticized by their employer.

Many people act a bit “differently” within the privacy of their own home, but a new survey finds most adults are a having conversations with items that can’t talk back. The poll finds over half routinely “chat” with inanimate objects at home (like the TV or the door). Another 60 percent say they’ll often have “entirely two-way” conversations with their pets. The survey also finds 44 percent of adults frequently talk with their houseplants. TheJoyOfPlants.co.uk

Some scientists believe that COVID-19 lockdowns may have helped decrease the amount of lightning produced in the atmosphere in the year 2020. A recent study presented at a meeting of the American Geophysical Union analyzed atmospheric factors that may have contributed to reductions of 10-20%. The study focused on Aerosol Optical Depth, which measures particles produced by burning fossil fuels. These particles can accelerate and enhance the collection of water vapor and cloud formation. The AGU noted that the reduction in lightning was generally consistent with reductions of aerosol particles.

Another BIG name may be joining the “Fast & Furious” in time for the next movie. A source has confirmed that Jason Momoa is in negotiations for a role in the next installment of the high-octane film franchise. He’s being eyed to play one of the villains in the upcoming “Fast & Furious 10”. News of his potential casting comes 6 months after Dwayne Johnson—who has appeared in 4 of the franchise’s movies, as well as the spin-off “Hobbs & Shaw”—confirmed he had no plans to return to the series amid his public feud with Vin Diesel. F&F 10 is currently scheduled for release in May, 2023.

Yellowstone star Kevin Costner has lined up his next project. The Oscar-winner will be getting back in the director’s chair for the first time since 2003’s “Open Range” for his latest passion project, “Horizon”. Costner has built much of his career on westerns, and Horizon will continue with that tradition, covering a “15-year span of pre-and post-Civil War expansion and settlement of the American West.” After making a name for himself directing the awards-sweeping “Dances with Wolves”, Costner hopes to carry on in that storytelling tradition.


Baskin-Robbins is introducing a new decadent ice cream flavor to celebrate Valentine’s Day. “Secret Admirer” features pink cake flavored ice cream, swirled with a rose ice cream, and sealed with a sweet strawberry ribbon. And that’s not all there is to look forward to for lovers of ice cream and well…love for Valentine’s Day:

• Baskin-Robbins has brought back the fan-favorite “Box of Chocolates Cake” for Feb. Inspired by classic, heart-shaped candy boxes, it allows customers to select their favorite ice cream and cake flavors, which are then topped with fudge and milk chocolate candies.

• Dairy Queen brought back its limited-edition Red Velvet Cake Blizzard and Cupid Cake for the month.

Routine weather events, such as rain and cooler-than-average days, have an annual economic impact of as much as $485 billion that reaches to every U.S. state.

Researchers found that just one lazy employee can quickly affect the performance or an entire workplace.

Some arctic seals can find the exact spot where they were born even after spending five years out at sea.

With temperatures in Miami dipping below 50°F (10°C) a few weeks ago, meteorologists were warning to watch for falling iguanas. As CNN’s Allison Chinchar put it: “Iguanas begin to get sluggish or lethargic once the temperature drops below 50…but once the temperature drops below 45, all the iguanas go into a dormant or cold-stunned state.” The problem? Iguanas often sleep in trees, so when their bodies go dormant, they tend to fall onto streets, cars, pools, or even people. And keep in mind, we aren’t talking about little lizards. Adult males can reach 5 ft. in length and weigh up to 20lbs., so you don’t one want to land on top of you – or your car! But don’t be too alarmed: the immobilized iguanas return to life as temperatures rise again.

IF MEN WERE IN CHARGE OF PLANNING WEDDINGS:

• There would be a ‘Rehearsal Kegger Party’.

• Tuxes would have team logos on the back.

• Big slobbery dogs would be eligible for the role of ‘Best Man’.

• There would be ‘Tailgate Receptions’.

“Love is a lot like a backache, it doesn't show up on X-rays, but you know it's there.” George Burns