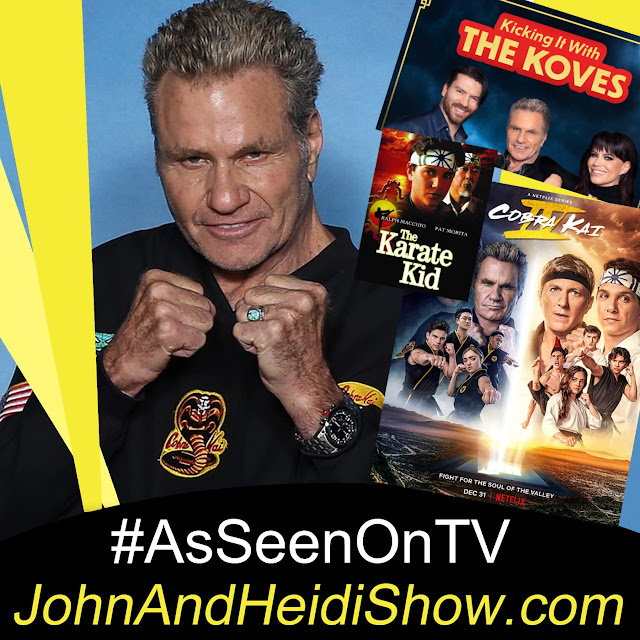 Today we visit with beloved Cobra Kai star Martin Kove (aka “Sensei John Kreese”) about a new project he's doing with his son and daughter called “Kicking It With the Koves” which features Kove and his children, fraternal twins Jesse and Rachel as they recap episodes of the Netflix global hit television series, share stories from the original Karate Kid trilogy of films and give insight into their close-knit family bond.

In the premiere episode of Kicking It With The Koves, Martin Kove shares some behind-the-scenes stories about how he originally became involved in the Karate Kid Trilogy and the Cobra Kai series including how surprised the cast was when the iconic original film became a worldwide sensation.

Kicking It With The Koves is available on PodcastOne, iTunes, Spotify, Amazon and more.

A report says that spending time with your mother-in-law will strengthen your marriage.

According to the internet, the sound of a person’s voice actually improves in the small, confined space of the shower. When you sing in an open area, you basically only hear your voice as it is produced. However, in the shower, the sound waves reflect off the walls, producing a much richer sound, improved bass, and more volume. Some theories are less scientific. The book Sounding the Silence believes people are inclined to sing in the shower because they feel safe and relaxed. The quiet solitude creates a space in which our spirit can freely express itself. Or, to put it another way, a shower’s privacy allows people to relax and let loose.

A new study suggests parents should consider making better use of commercial breaks while kids watch TV. Researchers from the University of Michigan found starting a conversation with children as they watch their favorite programs appears to mitigate some of the developmental drawbacks that come from too much screen time. While prior studies have showed that kids who watch lots of TV lag behind in certain developmental areas, such as curiosity, this latest work shows the more parents talk with their preschoolers during shared TV time, the more likely those kids are to display high levels of curiosity by kindergarten. This is especially true for socioeconomically disadvantaged children.

“The Tinder Swindler,” an eye-opening documentary about a notorious con man who used the dating app to defraud multiple women, could be getting the movie treatment. Netflix is in talks with producers about dramatizing the wild documentary that’s likely to make any Tinder user’s blood run cold. The Tinder Swindler doc debuted on the streaming service last Wednesday, and has already cracked the platform’s Top 10. It tells the story of Israeli fraudster Simon Hayut, who conned Scandinavian women into parting with hundreds of thousands of dollars by pretending to be the son of an Israeli diamond tycoon.

Seven in 10 couples are engaging in 'bathroom wars' - arguing about the state the room is left in. A study of adults found men are left incensed by their partner not clearing their hair out of the plug hole – and women are horrified by the mess or the ghastly smell left behind by men in the toilet. Over a third of adults think their partner hogs the shower for too long, while failing to clean the taps and leaving wet towels everywhere enrages one in six. Nearly one in five have said they have split up with someone because they were so infuriated by their bathroom antics.

Resumes are a foundational part of a job search. Yet, people still struggle to know what should be part of these important documents. Wonsulting CEO Jonathan Javier said on the latest Career Talks that there are two crucial items to include on resumes: Mention the hard skills or tools you have that will be useful for the job. These can usually be found in the job description.

Quantifiable metrics that talk about your performance in previous roles. If you don’t have these, you can estimate them or ask peers/managers for the data.

Las Vegas is NOT the largest gambling centre in the world. Macau surpassed it in gambling revenues in 2006.

The only place a naked mole rat has hair is inside its mouth.

In the middle-ages, dead bodies were often used as ammunition in catapults.

Move over, “Squid Game” – there’s a new South Korean thriller in town, and it’s already earned a perfect 100% score on Rotten Tomatoes. The latest Netflix offering is “All of Us Are Dead”, a zombie horror which has been praised by audiences and critics alike after dropping on Friday. The thriller takes place in a high school that becomes overrun with zombies, with students forced to decide whether to hide, flee or fight. According to ComicBook.com, the show has already reached third spot on the streaming platform in the US.

Nothing is more familiar in the moviegoing experience than buttered popcorn. A few years ago a company called Baja Innovations was marketing something called a Flavor Funnel, a long, plastic gizmo that’s stuck in the middle of popcorn containers. The funnel had holes for leaking butter throughout. Sounds interesting, but it would’ve been an extra expense and extra waste for movie theaters. Plus, it’s easy to ask the concession employee to add butter halfway during the bucket fill. https://www.youtube.com/watch?v=URnizqxV3RI

1. Leaves an empty toilet roll and doesn't replace it

2. Never cleans the toilet after making a mess in it

3. Never cleans their hair out of the plughole

4. Leaves a ghastly smell behind after them

8. Always leaves the toilet seat up

9. Leaves hairs in the sink or shower tray after shaving

12. Walks in on you when you're using the loo

14. Leaves clothes all over the floor

15. Tries to talk to you when you're on the toilet

17. Sprays toothpaste all over the mirror

18. Leaving the top of the toothpaste tube covered in toothpaste

19. Always turns taps on elsewhere when you're trying to shower, messing with the temperature

20. Not picking the bath mat up after using it

An 800-mile, $78 journey brought a smiling snowman to a Florida classroom full of kids. When kindergarten teacher Robin Hughes, realized almost all the kids in her classroom had never laid eyes on frozen precipitation after reading a book about snow with them, she asked her sister, Amber, of Louisa KY if she would mail her some, on the off-chance that it snowed there this year. Fast forward to January 8th, and hearing of a coming Kentucky snowstorm, the teacher asked her sister to build a snowman for her classroom. And thus, “Lucky” was born, with blueberries, carrots, and twigs for eyes, a nose, and arms. Sealed in a temperature-controlled package with ice, Lucky flew priority USPS to Riverview, FL. Lucky was received at the school with utter wonderment from the children, who Hughes says just wanted to touch him, and asked if he was going to “come to life”. Now, Lucky is kept cold in the school cafeteria, and brought out for other classes to demonstrate the majesty of snow.