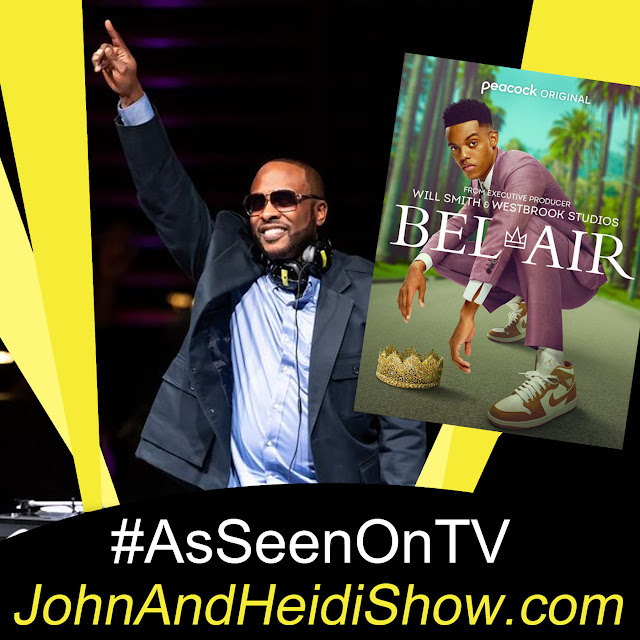 Today we visit with DJ Jazzy Jeff about a new show on Peacock. Bel-Air TV show description: A re-imagination of the beloved sitcom "The Fresh Prince of Bel-Air" set in modern-day America through a new, dramatic take on Will's complicated journey from the streets of West Philadelphia to the gated mansions of Bel Air. As these worlds collide, he reckons with the power of second chances while navigating the conflicts, emotions, and biases of a world far different from the only one he's ever known. https://www.youtube.com/watch?v=rQ1uG91Bbls

Hosts DJ Jazzy Jeff and Aida Osman bring you a weekly look into the themes surrounding "Bel-Air" and the show's commentary on American society in 2022. They'll talk to the people building the world of "Bel-Air" for an in depth look at what is driving the drama. It's a culture podcast. It's a TV podcast, but it's not a recap podcast. Episodes here: iheart.com/podcast/1119-bel-air-official-podcast

Do you associate St. Patrick’s Day with luck? If you don’t, you’re not alone. According to a recent study, 87% don’t believe Saint Patrick’s Day is a lucky holiday. But despite that, 53% of people will be wearing green. What about four-leaf clovers, are they considered “lucky?” You may be surprised to learn the extent to which some people believe, and often rely upon, luck. 68% of people believe in “luck,” and even of those who don’t, 31% still abide by superstitions “just in case”. Top lucky beliefs among Americans: beginner’s luck, wishing on a shooting star, and throwing a coin into a fountain. Nearly 1 in 10 make decisions based on their horoscope. 62% of people have spent time looking for four-leaf clovers. https://www.paysbig.com/blog/lucky-habits-of-americans

Some fish given tattoos will try to scrape them off if they catch sight of themselves in a mirror, indicating that they have mirror self-recognition, according to a study published in the journal PLOS Biology. Tattoos resembling parasites were applied to the test fish’s necks, to create the optical illusion that there was there for them to remove and eat. Scientists call this an exciting revelation, considering self-awareness is a trait that’s so far only been conclusively shown in humans and chimpanzees.

After seeing a movie starring all three versions of ‘Spider-Man’ explode at the box office, Paramount+ knew exactly how to respond. The streaming service announced a new “Blue’s Clues” movie that will feature all three hosts of the beloved Nickelodeon series working together with everyone’s favorite blue puppy. The film is titled “Blue’s Big City Adventure,” and shows what happens when ‘Blue’ meets the Big Apple. Paramount+ has not announced a release date for the film.

Tom Holland nearly lost his teeth while filming “Uncharted”. He plays ‘Nathan Drake’ in the movie based on the video game series of the same name, and said that a ring he had to wear around his neck did damage to his pearly whites during the movie’s fight scenes. Quote: “We had to get a rubber one made because during the fight scenes it kept whacking me in the teeth.” Uncharted, which also stars Mark Wahlberg and Antonio Banderas, comes out Feb. 18.

Tom Holland’s mother called “Spider-Man” producers to insist her son get enough toilet breaks. On “Live With Kelly & Ryan”, Holland revealed that his mom Nikki once phoned the studio on his behalf, because she was worried about his costume not having a zipper for him to easily relieve himself. Two days later, he said, “the producer came up to me and was like, ‘How are your kidneys?'” Holland was puzzled until the producer told him: “Well, your mom called us…” Holland also used his appearance on the show to deny reports that he and girlfriend Zendaya have bought a house together in London.

Scientists say they’ve “cracked the code” on perfect non-alcoholic beer. A team from the University of Copenhagen say, after years of research, they’ve come up with a way to produce a group of small molecules called monoterpenoids, which provide the hoppy-flavor and aroma that non-alcoholic beer lacks, and then add them to the beer at the end of the brewing process. No brewer has been able to correctly do this before. The scientists also point out their way of brewing is much more sustainable, and could also be applied to brewing regular beer.

A massive new “beer spa” is opening In Ontario and it will be the largest in the world. The website for Muskoka Beer Spa in cottage country north of Toronto says it will feature an outdoor pool, 2 large hot tubs, dump buckets and 4 saunas, in a nature setting. You can grab a beer from the outdoor cocktail hut or attached craft brewery and enjoy it in lounge areas around the pools, or sit in the beer garden. Guests will be able to stay in cozy cabins which include a draft beer tap in the room, along with a wet bar. But its not ALL beer and burping. Think of a Nordic spa experience with a beer festival twist. The beer spa will have mobile treatments including massage therapy. There will also be yoga and mindfulness classes — sorry no beer allowed there. Live music events are also planned. The Muskoka Beer Spa opens April 7.

Generally, the colder the air is, the smaller the snowflakes are.

The word ‘yo’ was first used in the 15th century.


Question: When asked to name what sounds make them happy, 15% people said THIS. What is it?

Tesla owners have been banned from making their cars “fart” after the National Highway Traffic Safety Administration said it violated safety standards. As a result, the electric carmaker is recalling nearly 579,000 vehicles in the US. Tesla’s vehicle’s have what the company calls a “Boombox” function, which allows drivers to play sounds through external speakers while it is moving, effectively turning it into a boombox on wheels. The feature debuted in a software update in 2020, presented as a way to increase pedestrian visibility through warning sounds. One of the ‘warning sounds’ included was a “fart” setting, allowing drivers to draw attention to their cars with the sound of flatulence. LINK: https://tinyurl.com/2t7y3aat

We know that your love for your canine is more than the universe could explain. That’s why remember these top 10 mistakes dog owners make:

Did you know that only about 15% of all dogs in the United States are microchipped at the moment?

9) Your wants and their needs

Daily exercise, proper nutrition, and training are all essential for dogs. If you cannot provide these things for your dog, it is unjust to keep him in your home.

When dogs’ hygiene is not maintained properly, they are vulnerable to various infections and illnesses.

7) No Rules And Boundaries

One of the most common causes of dog aggression is when owners fail to set rules and boundaries for their dogs.

6) Negative about your dog’s personality

There are a lot of things to love about dogs. They are loyal, loving, and make great companions. However, one thing to keep in mind before adopting a dog is their personality. If you are unsure if you can handle your dog’s personality, it may be best not to adopt one.

Giving your dog human food can lead to an unhealthy food eating habit. Carbohydrates are not digested as well in dogs as in humans, causing gas, bloating, and diarrhea.

4) Expecting more than you can train

In recent years, the number of people who expect too much too soon from their dogs has increased.

There are many misconceptions about dog training. One common myth is that you must punish your dog for getting it to behave. In reality, this will only exacerbate the issue and possibly make your dog more erratic.

When dogs aren’t feeling well, they are notorious for hiding. Symptoms of a problem are frequently dismissed as “dog behaviour.”

The phrase “a tired dog is a good dog” holds a lot of truth.
https://theverybesttop10.com/mistakes-dog-owners-make/

“Instead of the mahi mahi, may I just get the one mahi because I’m not that hungry?” - Shelley Darlingson (Anna Faris), The House Bunny

Two brothers in their mid-50s have been reunited because Edward Waites decided to traveled to Lake Tahoe during a massive snowstorm. During his visit, he was interviewed about the conditions by a local TV station — a 4-second clip that was just enough time for his long-lost brother, Randy, to spot him. Randy wondered if there was a Waites family connection. His daughter did an internet search, and found that in fact, Edward and Randy shared a father, who left the family shortly after Randy’s birth, and the boys were raised separately. Edward was stunned when Randy’s family contacted him in January, and the brothers finally met in person earlier this month. Randy said: “I’ve waited my whole life to know someone like Ed. I just want to be the best brother I can be. And I know he wants to do the same for me.”