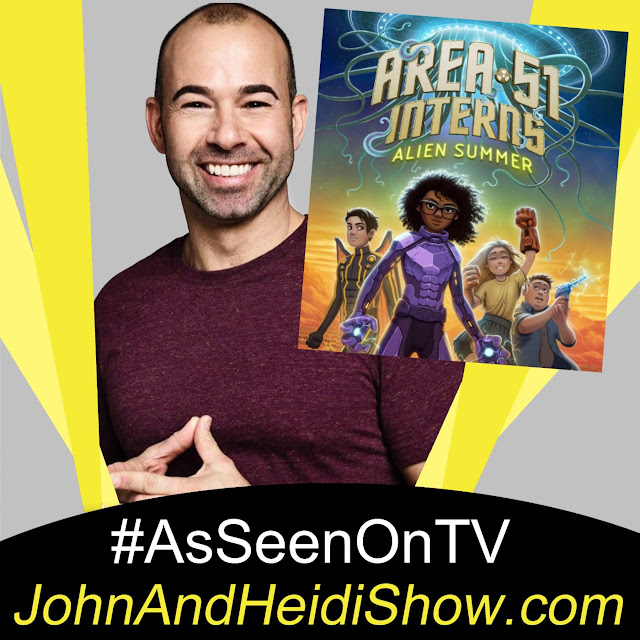 Today we visit with best-selling author (one of the Impractical Jokers as well) James S. Murray about his new book “Area 51 Interns: Alien Summer”

JAMES S. MURRAY is a writer, executive producer, and actor, best known as “Murr” on the hit television show Impractical Jokers along with his comedy troupe, the Tenderloins. He has worked as the Senior Vice President of Development for NorthSouth Productions for over a decade and is the owner of Impractical Productions, LLC. He recently starred in Impractical Jokers: The Movie, and also appears alongside the rest of the Tenderloins, and Jameela Jamil, in the television series The Misery Index on TBS.

His co-author Carsen Smith is a comedy writer and producer in New York where she writes for the Upright Citizens Brigade. She is the co-founder of The Goose Lodge - a speakeasy underground comedy club in Brooklyn. You can see her headlines on Reductress and around NYC with her sketch team One Bad Egg. Area 51 Interns: Alien Summer is her first novel.

Apparently, extremely hot and humid weather can kill a person a lot more easily than previously thought. A Pennsylvania State University study, one of the first to directly assess humid heat stress among young people, found that when humidity is at an absolute max, the upper limit of human adaptability is just 31°C (87°F). That’s 4° less than theoretical estimates, and for older people, the threshold is even lower. Compared to hot and dry climates, the human body cannot withstand hot and humid conditions nearly as well. That’s because at 100% humidity, sweat cannot dissipate as easily to cool our bodies down. In an absolutely dry environment, the human threshold for survival is probably around 50°C(122°F). But for a completely humid environment, the new results suggest temperatures need only reach that 31°C (87°F) threshold before our bodies go into heat stroke.

Remember “Freedom fries”? Now, a Canadian diner has temporarily renamed a dish to show support for Ukraine after Russia’s invasion. Poutine is a popular Canadian specialty of French fries and cheese curds topped with brown gravy. When said out loud, it sounds similar to “Putin” — the Russian president’s last name. Le Roy Jucep, a restaurant in Drummondville, Quebec, which claims to have invented poutine, wrote on Facebook that it is changing the name to “la frite fromage sauce” (the fry cheese gravy). The post also revealed “a revised logo sporting Ukrainian blue and yellow.”

“Storage Wars” star Rene Nezhoda scored big on his latest find, unearthing tons of memorabilia that belonged to Olympic legend Florence Griffith Joyner. His friend George bought Flo-Jo’s storage locker 8 years ago NEAR San Diego. Nezhoda says he dropped several thousand dollars to take the stuff off his hands and walked away with her Olympic jacket and even her signed track shoes — the ones that she wore while breaking world records! Joyner broke records in the 1988 Seoul Olympics in both the 100m and 200m dash, and took home a total of 3 gold medals. Nezhoda says he’ll likely sell the pieces of history on eBay or through Heritage Auctions.

After conquering the beach, Pamela Anderson will now try to dominate Broadway. She’ll portray ‘Roxie Hart’, the morally flexible antiheroine at the heart of “Chicago,” the long-running revival of the Kander and Ebb/Bob Fosse classic. Marking her Broadway debut, Anderson steps into a role previously played by Gwen Verdon, Ann Reinking, Brooke Shields, Ashlee Simpson and Melanie Griffith. She’ll start April 12 and will play an 8-week limited engagement at the Ambassador Theatre.

“The Walking Dead” universe is getting even bigger. Lauren Cohan, who plays ‘Maggie’, and Jeffrey Dean Morgan, who plays ‘Negan’, will star in a spinoff series set in New York. “Isle of the Dead” will see Maggie and Negan traveling into a post-apocalyptic Manhattan long ago cut off from the mainland. The crumbling city is filled with the dead and denizens who have made New York City their own world full of anarchy, danger, beauty, and terror. Isle of the Dead will debut on AMC next year.

Mayim Bialik has a message for “Jeopardy!” fans who are upset that she referred to the opening round of the game show as “Single Jeopardy.” Fans who were up in arms can rest easy, though. She told Yahoo Entertainment: “I will never do it again, even if it’s in the script. I will not say it.” She was taken aback by the fan reaction, saying: “People cared a lot. I get it and I’m sorry. I’m doing my best.” But she also pointed out there is precedence for calling it “Single Jeopardy.” The show’s late host Alex Trebek occasionally used the same term, even if it’s not the traditional or accepted way of referring to Jeopardy’s first round.

Of course, your beloved pup’s ears perk up when he hears you speak, but is he really able to recognize your voice? According to fascinating new research out of Hungary, the answer is yes! Scientists from Eötvös Loránd University had human owners hide behind one of two large blocks, while a complete stranger hid behind the other. The owners spoke to their dogs while the strangers simultaneously did the same, and dogs were able to correctly identify their owner’s voice 82% of the time.

Researchers have concluded using dogs or cats in ads makes people more likely to buy a product. The University of South Carolina study looked at consumers’ decision-making skills when viewing ads, and found people were likely to take more risks such as a volatile stock option, or bet more money when ads featured a dog or cat as the spokesperson. The study author said: “These effects occur because pet exposure experiences remind consumers of the stereotypical temperaments and behaviors of the pet.”

A Nova Scotia couple whose bulldog gave birth to a litter of 8 puppies says they were shocked when the last one was born – green. Trevor and Audra Mosher of Middle Sackville said they started to dry the 8th puppy off and immediately noticed its fur seemed to be dyed green. After a Google search, they found that the rare discoloration is believed to be caused by light-colored puppies coming into contact with green pigments from bile while in the womb. Names being considered for the pup include Hulkette, Fiona, Wasabi, Lucky Irish and Pistachio. The couple said the puppy’s green coloring has started to fade in the days since the birth.

Russian President Vladmir Putin once tried to sue Harry Potter filmmakers because he believed the bald, floppy-eared, pointy-nosed, bug-eyed character ‘Dobby’ the house-elf was based on him. (No kidding: https://tinyurl.com/3xutfvbr)

Studies show that developing a larger vocabulary may help protect you against depression, by allowing you to precisely label — and confront — subtle emotions.

Ninjas don’t wear black. Traditional ninjas know the importance of blending in, so they usually disguise themselves as civilians.

A 2010 study found that people fluent in multiple languages almost always swear in their native tongue.

Question: One in 9 people say they have seen a physical fight break out over THIS. What is it?

Answer: A board game

Flawed design and poor communication — including an operator’s decision to flip a switch clearly marked “Do Not Operate” — were the main causes of an island-wide power outage in Taiwan last Thursday, according to a government investigation. A failure at the Hsinta coal-fired power plant led to blackouts across multiple regions, including the capital Taipei. In the hours before the power plant failure was confirmed as the reason for the disruption, speculation swirled online that the island’s grid had been targeted in a cyberattack. A maintenance team had done work there on Wednesday, and warned operators not to route electricity through the equipment. The next day, despite a yellow and red warning notice attached to a control panel, a staff member pulled the switch.

THE WORST FROZEN FOODS FOR YOUR HEALTH:(according to experts)

☞ Packaged frozen dinners: The problem is salt, mostly. WAY too much salt. If you must, find a lower-sodium option, and pair it with a salad.

☞ Pizza rolls: What we’ve got here is a combo of icky additives, calories galore, and excess fat and sodium.

☞ Frozen pizza: Oh. Apparently frozen pizza can be just as bad as pizza rolls. There are some healthier versions with veggies and thin crust.

☞ Pot pies: These are some of the highest calorie and fat-containing foods.

☞ Corn dogs: Processed meats are bad for your heart. And the batter has almost no nutrients, plus it’s fried.

☞ French fries: Check the ingredients, look for added oils and salt. But you’re probably still going to get a heaping helping of fat and calories.

☞ Calzones: Lots of sodium, again. Like, your total daily recommended amount in just one calzone…

☞ Sweet & sour chicken: A good source of protein, but also a ton of sugar.

☞ Pastries and baked goods: Lots of carbohydrates here with no real nutritional value. Probably a pile of salt, sugar and fat.

“Never put off till tomorrow what you can do the day after tomorrow just as well.” - Mark Twain

Gas Station Lowers Price To $2.25 To Give Community A Break At The Pump
https://www.sunnyskyz.com/good-news/