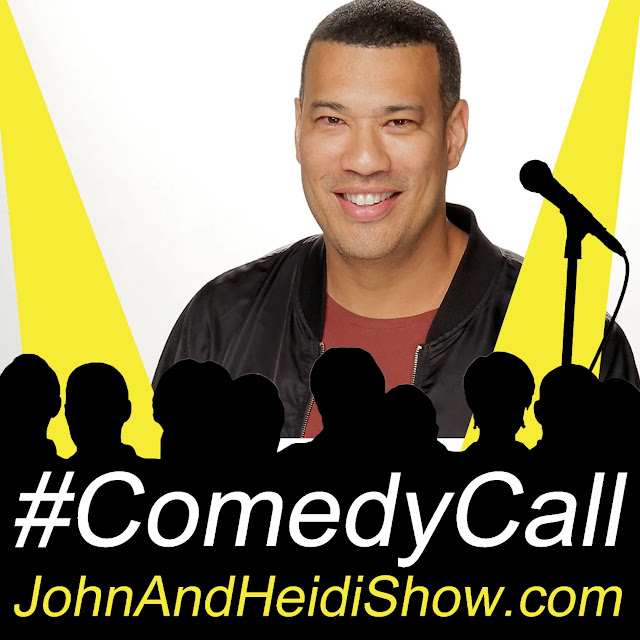 Today we have a #ComedyCall with two-time Emmy-nominated actor and stand-up comedian Michael Yo. Known for his work on shows like Chelsea Lately, The Wendy Williams Show, The Talk and The Insider on CBS.

Four years ago, Yo decided to follow his lifelong dream to become a standup comedian. He was most recently on America’s Got Talent, where he received an “overwhelming ovation,” from Simon, Howie, Sofia and Eric.

He just released his second comedy special, I NEVER THOUGHT, on YouTube.
You can watch it for FREE at https://www.michaelyo.com

A recent study from HiBob and Fiverr showed that 22% of workers are leaving their jobs to become freelancers, and while that could lead to greater autonomy over one’s schedule, it could also lead to unpredictability when it comes to earnings.

Being optimistic may help to improve a person’s emotional well-being. The Boston University School of Medicine followed 233 older men over an 8-year period. They first completed an optimism questionnaire, then reported daily stressors and mood changes over the 8-year span. Those who were more optimistic were less likely to report negative moods and more likely to report positive moods. They also felt fewer stressors. The researchers say their findings suggest that optimism may be associated with more favorable emotional well-being in later life.

According to a recent poll, nearly 1 in 3 people think Ben Affleck is the best Batman. In the survey of 1,000 Americans in anticipation of last Friday’s release of “The Batman” starring Robert Pattinson, Affleck, with 31% of the vote, barely edged out Michael Keaton (30%) as the favorite on-screen Batman. Kevin Conroy, Christian Bale and Adam West ranked 3rd, 4th and 5th, respectively – and while George Clooney’s self-described “franchise killer” ranked low (23%), he wasn’t at the bottom of the list. That honor goes to Will Arnett’s comedic portrayal in “The LEGO Movie” and “The LEGO Batman Movie” (21%).

Twenty-eight years after his shoestring-budgeted breakout “Clerks” became the belle of the 1994 Sundance Film Festival, Kevin Smith is launching his own movie fest in his native New Jersey. He unveiled the inaugural SModcastle Film Festival (named after the his long-running podcast network and new studio), taking place Aug. 17-21 in Leonardo, N.J. The festival’s central venue, the SModcastle theater, is just steps from the still-functioning Quick Stop Groceries convenience store immortalized in Clerks.

Ariel Winter is replacing Demi Lovato as star of the NBC comedy pilot “Hungry”. The “Modern Family” actress’s new gig was announced in the wake of Lovato dropping out of the project just as it was set to start production. Lovato, who will remain on as an executive producer, along with Lovato’s manager Scooter Braun, cited scheduling issues. Hungry follows a group of friends who belong to a food issues group. They help each other look for love, success — and the perfect thing in the fridge. Production with Winter on board began this week.

The Tin Man’s oil can from “The Wizard of Oz” is going up for auction. The oil can is remembered for its use in the scene in which the Tin Man is set free from his rusted state, and it is said to be the only original item in existence from the iconic character’s costume. The rare piece of movie memorabilia is being auctioned off for the first time through Kruse GWS Auctions, and is expected to fetch at least $200,000. In terms of significance, the Tin Man’s oil can is right up there with Dorothy’s ruby red slippers. It is currently on display at the Academy of Motion Picture Arts and Sciences. The auction begins March 26.


Conventional wisdom says a reasonable amount of exercise to shoot for is to take 10,000 steps per day. But for most of us, that’s a goal that’s difficult to maintain. Well, here’s some good news: By analyzing data on tens of thousands of people across 4 continents compiled between 15 existing studies, a team of researchers has now landed on a more comfortable figure: the optimal number is closer to 6,000 steps per day, depending on your age. The University of Massachusetts researchers concluded that for adults aged 60 and older, the reduced risk of early death tops out at around 6,000 to 8,000 steps a day. More steps may have other health benefits, but a reduced chance of death isn’t one. The study found that those who are younger could do well to walk a little more, but there isn’t evidence that they’d live longer by walking more than 8,000 to 10,000 steps a day.

Spending just 30-60 minutes a week on muscle strengthening exercises could be enough to significantly reduce your risk of dying — even with no extra cardio like running or cycling. Researchers in Japan analyzed 25 years’ worth of studies done on 25,000 people, and concluded: “Muscle strengthening activities were inversely associated with the risk of all-cause mortality and major non-communicable diseases including cardiovascular disease, cancer, diabetes, and lung cancer.” The World Health Organization currently recommends that adults carry out muscle strengthening exercises at least 2 days a week, including squats, push ups, lifting weights, or even some serious gardening involving digging and shoveling.


Mickey Mouse’s dog “Pluto” was named after the planet, not the other way around.

Soybeans produce more flatulence than any other bean.

The harmonica is the world’s best-selling music instrument.

To make one kilogram (2.2 lbs) of honey, bees have to visit 4 million flowers, traveling a distance equal to 4 times around the earth.

According to “The Joy of Cooking”, one ostrich egg will serve 24 people.

Question: A survey found that the #1 thing forgotten by adults is where they put their keys. What is #2?

Answer: What they went to the grocery store for

“The Batman,” last weekend’s biggest movie, had an unexpected element introduced to a screening in Austin, Texas. According to reports, on Friday, at the Moviehouse & Eatery theater, an unidentified guest unleashed a live bat, which then began flying around the theater (as bats tend to do). Management attempted to lure it out of the auditorium by shutting off the screen and turning on a light in the hallway. Apparently, that didn’t work, and while everyone was offered a refund, most decided to stay and watch the movie, bat or no bat. No word on how the person smuggled the bat into the theater.

You can buy hundreds of coffee filters for just about nothing at the dollar store, and they’re handy for a lot more things than just brewing coffee. Give these a try . . .

➠ Cover bowls or dishes when cooking in the microwave.

➠ Separate your good dishes with a coffee filter to protect them when moving or storing them.

➠ If you break the cork when opening a wine bottle, filter the wine through a coffee filter.

➠ Put a few on a plate and put your bacon, French fries, chicken fingers, etc. on them, to soak up the grease.

➠ Line a plant pot with one to prevent soil from leaking out through the drainage holes.

➠ Put baking soda into a coffee filter and insert into shoes or into a closet to absorb or prevent odors.

➠ For the kids: Poke a hole in a coffee filter to prevent a Popsicle or ice cream cone from dripping on little hands.

“Eggs are fantastic for a fitness diet. If you don’t like the taste, just add cocoa, flour, sugar, butter, baking powder and cook at 350 for 30 minutes.” - Anonymous

Chicago Businessman Is Giving Away $1 Million In Free Gas
https://www.sunnyskyz.com/good-news/