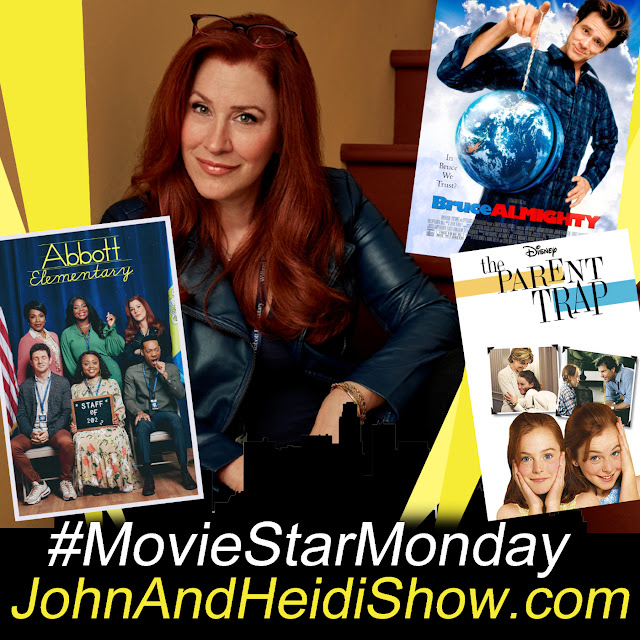 This #MovieStarMonday we visit with Lisa Ann Walter Abbot Elementary


It seems most of us think we’re pretty handy in the kitchen. According to a survey, 63% of people are so confident in their cooking skills, they believe they could compete with the professional celebrity chefs they see on TV. 77% of respondents to the poll of 2,000 Americans agreed that cooking is one of their favorite things to do…which is a good thing, as they prepare an average of 9 meals at home per week. Two-thirds think they have what it takes to open their own restaurant or catering business, and 63% think they should host their own cooking show on TV. When asked how they think they would make out on a cooking competition TV show, 3 in 10 think they would make it to mid-season, and 27% are sure they’d be the first to go. But 5% say they are confident they could win.

Ukrainian authorities have let it be known to citizens that they don’t need to declare captured Russian tanks or any equipment they pick up as personal income. A statement from the Ukrainian National Agency on Corruption Prevention says: “Have you captured a Russian tank or armored personnel carrier and are worried about how to declare it? Keep calm and continue to defend the Motherland!” It says there is no need to declare captured Russian tanks and other equipment as taxable income, because the country does not value them at more than 248,100 Ukrainian hryvnia, or about US $8,300.

Robert Pattinson, star of the “The Batman” (out today), says portraying the Dark Knight involved eating lots of bland, boiled fish. He previously revealed that he cut back on alcohol, processed meat, and fried food in order to build a superhero physique, and in a recent interview, he shared that his diet included so much fish, he got tired of eating it. Quote: “I never want to see a piece of white fish with just lemon on it ever again.” Fish is a common food on muscle-building diets because it’s high in protein and healthy fats.

The protector of Gotham City is once again flying high atop the box office charts, as “The Batman” has scored a spectacular $128.5 million opening weekend, becoming only the second film since the pandemic began to open to over $100 million. The Matt Reeves-directed blockbuster is set to be the biggest theatrical hit for Warner Bros. since the DC film featuring Batman’s nemesis “Joker” was in theaters in fall 2019.

With Robert Pattison’s “The Batman” making some serious bank at the box office over the weekend, it has once again raised the question “Exactly how much money does that guy have anyway?” And by “that guy”, we mean Batman. One reporter ran the numbers, and here’s what he came up with:

• Wayne Manor: EW says Batman’s home is worth $137 million, and has a maintenance cost of $1.6 million per year.

• Batmobile: It appears he drives a modified 1960s Camaro in the new movie. That can sell for well over $100,000, and factoring in the cost of superhero modifications, you’d be looking at millions.

• Batsuit: The best guess is that a real life Batsuit, including its famous cowl were tech like night-vision and radio communication is located, could set you back over $1 million.

Keeping mothballs in your tool chest will help prevent rust.

People with blue eyes are better able to see in the dark.

95% of the paperwork filed in an average office will never again be seen by human eyes.

Sunshine can work as a natural antidepressant.

On average, a 150-pound person burns 114 calories per hour while standing and doing nothing.

Eating spicy foods can boost your metabolism and cause your body to burn more fat.

Question: The average person will say THIS 5 times today. What is it?

A man who made big bucks by being a dead-ringer for Vladimir Putin now fears for his life after the Russian president’s invasion of Ukraine. 53-year-old Slawek Sobola of Poland has spent the past 8 years professionally impersonating Putin, and has traveled to the US, the UK and Hong Kong for special gigs. He says that before the war, he wasn’t concerned about for his safety in his city of Wroclaw, but now he is, because “there’s a lot of people from Ukraine who work and live here” and now he’s “afraid that these people could be angry or aggressive when they see me.” He has vowed to no longer impersonate Putin, saying he does not want to profit from the conflict.

As you’ve no doubt heard, Kanye West (“Ye”) and Julia Fox split earlier this month after a whirlwind romance that lasted, well, a month or 2. Here are some other “blink-and-you- missed-it” celeb couplings . . .

➠ Taylor Swift and Tom Hiddleston: They hooked up after her breakup with Calvin Harris in June 2016. The English actor is thought to have inspired Swift’s song ‘Getaway Car’, about clinging to the nearest man to escape a relationship that was falling apart.

➠ Henry Cavill and Kaley Cuoco: Dated for 10 days in 2013, with her later saying that the paparazzi was too intense when hanging out with ‘Superman’.

➠ Leonardo DiCaprio and Blake Lively: They were pictured galivanting around Europe together in 2011, but their smitten stares only lasted a few months.

➠ Ariana Grande and Pete Davidson: Sparks apparently flew when she hosted “Saturday Night Live” in 2016. And just 2 months into their very public romance, they shocked fans by announcing their engagement. They called it quits shortly thereafter.

➠ Gigi Hadid and Joe Jonas: They were the “It” couple when they dated in the summer of 2015. (At least they were together long enough for her to be in one of his videos . . .)

➠ And let’s not forget: Kim Kardashian and Kris Humphries were married for 72-days in 2011 . . . and Renee Zellweger and Kenny Chesney filed for annulment of their 2005 marriage after 4 months.

“I remember it like it was yesterday. Of course, I don’t really remember yesterday all that well.” - Dory (Ellen DeGeneres), Finding Dory