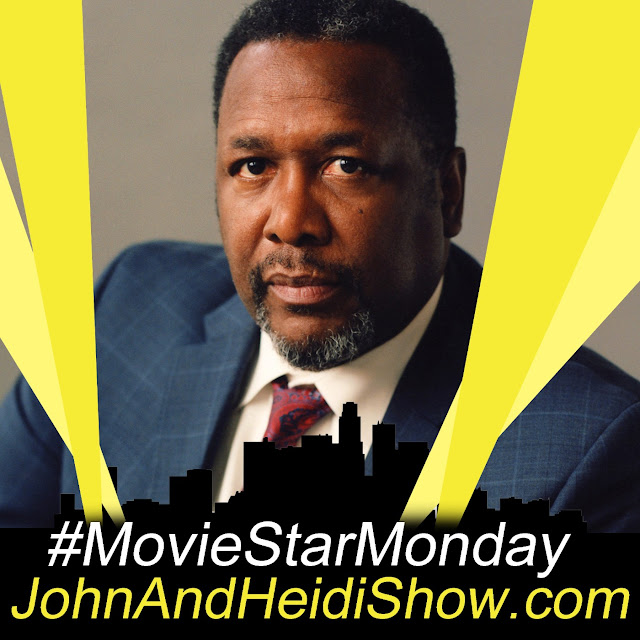 This #MovieStarMonday we visit with actor/producer and businessman Wendell Pierce, known for roles in HBO dramas such as Detective Bunk Moreland in The Wire and trombonist Antoine Batiste in Treme; as well as portraying James Greer in Tom Clancy's Jack Ryan, high-powered attorney Robert Zane in Suits, and Michael Davenport in Waiting to Exhale. Pierce also had roles in the films Malcolm X, Ray, Selma and Horrible Bosses.

We will visit about his new original movie “Don’t Hang Up”, an action-thriller based upon real life events. Available now on “Bounce”, the leading broadcast and multi-platform entertainment network serving African Americans.
https://www.roku.com/whats-on/movies/dont-hang-up

National Something on a Stick Day

Millennials are more likely to worry about about social media than their finances, a new study shows. Money managing app Upwise commissioned a survey of 2,000 millennials about how they spend their money — and time — and discovered they devote a whopping 150 more hours per year online than they do to managing their bank accounts. They’re also more likely to play with pets, surf streaming services, care for houseplants or ponder what to eat for dinner longer than they would thinking about their finances. Only 27% of millennials said they check their bank accounts once per week, while 45% said they didn’t know how much money they currently have in their accounts.

Rents in Manhattan, New York City have once again hit record highs, after cratering during the pandemic. The median monthly rent for a Manhattan apartment was a record $3,700 in February. That was up 24% from a year ago and up an unusually large 4.2% from January, according to a report from brokerage Douglas Elliman and appraisal firm Miller Samuel. Why the spike? Demand is surging for rental apartments, which means the “pandemic pricing” deals offered a year or two ago have now been replaced by bidding wars.

Rob Gronkowski and Miranda Cosgrove will take over Nickelodeon next month. The network has announced that the NFL superstar and “iCarly” actress will be co-hosts of the Nickelodeon’s Kids’ Choice Awards 2022, which will air live on Saturday, April 9. The show will, of course, feature tons of slime and pranks celebrating fan-favorite stars of film, TV, music and sports. Nickelodeon’s Kids’ Choice Awards 2022 will air on Nickelodeon, TeenNick, Nicktoons and the Nick Jr. channel.

“Top Gun: Maverick” has been cleared for takeoff! Tom Cruise’s long-awaited return to the cockpit as hotshot pilot ‘Lt. Pete “Maverick” Mitchell’ was delayed by the pandemic, pushing back the movie’s planned release date several times. It has now been slotted in for a special screening at the Cannes Film Festival, and is set to hit theaters on May 27. Cannes runs from May 17 to May 28. The full lineup of selections for the festival will be revealed in April.

“The Lord of the Rings” alum Sean Astin is joining the cast of Dwayne Johnson’s “Young Rock” in the role of The Rock’s childhood nemesis. As a recurring guest star for the comedy’s upcoming second season, Astin will play ‘Dr. Julian Echo’ in the show’s fast-forwards. Dr. Echo is now a chiropractor from Minnesota, who holds a grudge. “Young Rock” Season 2 will continue with stories inspired by Johnson’s upbringing before turning into The Rock, furthering the storylines from Season 1 and introducing new chapters.

It’s happening again. The changes are subtle…and sneaky, but discerning shoppers have probably noticed lately that some products are shrinking in size or quantity – or both. Record inflation means we’re paying more for everyday purchases like paper products, shampoos as well as food and beverages. Companies can raise prices, and many are, but some decide to go this route: Charge customers the same price while offering less. Product downsizing, also known as “shrinkflation” happens during times of high inflation because companies are also paying more for raw materials, production and delivery costs, according to Edgar Dworsky of ConsumerWorld.org. He says shrinkflation is becoming increasingly prevalent these days, and his organization has noticed it in toilet paper (shorter rolls), cookies (smaller), Gatorade (smaller) and conditioner (new squeeze tube containing less). Experts say that companies do this because raising prices is a last resort, as it is very noticeable to consumers and can influence demand.

We all know 1 or 2 people around the office who are seemingly incapable of composing an email without including a ‘smiley-face’ or a ‘winkie face’ or some other emoji before hitting “send”. Well, they might want to reconsider. Researchers at Tel Aviv University found that workers who frequently use emojis and other graphics in their emails are seen as less authoritative. In addition, these employees are seen to be less powerful. The aim of the study was to determine whether the use of images in emails influences the perception of employees at work. And, it seems, emojis should be used with caution. The scientists concluded: “Our advice: think twice before sending a picture or emoji to people in your organization, or in any other context in which you wish to be perceived as powerful.”

The “O” before an Irish name, such as “O’Reilly,” means “descendant of.”

Bart Simpson’s name is an anagram of “BRAT”. His full name is Bartholomew Jojo Simpson.

‘The Incredible Hulk’ was initially supposed to be gray, but according to Stan Lee, an issue with the printer turned the Hulk green.

Question: In a survey, 62% of parents said it is easier to do THIS with a girl than with a boy. What is it?

A hair salon owner in England has decided that a 4-day workweek is enough. Joel McCauley, who runs Slunks in Cardiff, decided to let staff work a shorter week in March 2020, when the pandemic hit. But after noticing his employees were happier, healthier and more relaxed after he introduced the measure, he decided to make it permanent. And here’s the weird thing: Workers are still being paid for a full 5-day week, plus part-timers were given a boost in pay. McCauley says he’s seen the benefits, with his team having more energy and a surge in productivity. Now, he’s urging other businesses to follow suit, saying: “This is simply a better, healthier way of working…Outside work, you can be a better person, a better parent, a better member of the community.”

With many people traveling (or planning to travel soon…), here are some “unpopular” travel opinions. Which do you agree with?

⇒ The day before a vacation is better than the vacation itself. (That sweet moment of realizing that vacation begins tomorrow is worth savoring. But that “last day of vacation” feeling? Ouch!)

⇒ There is no point in being first to board a plane. Priority boarding is useless. (Would you rather sit in the waiting area or stand in a long line to finally sit in a tiny airplane seat for even longer?)

⇒ There should be a dedicated section on the plane for families with children. (Probably near the bathroom…)

⇒ Plane seats should NOT be reclinable. (Yes, some find it more comfortable, but it’s not for the person behind. If you’re really tired, you’ll be able to sleep in the upright position.)

⇒ There’s no point in standing up on the plane as soon as it lands. (Why block the aisles for 15 mins., while you can go nowhere?)

⇒ I think clapping when a plane lands is sweet. (Airline staff work a stressful job, have to deal with some awful people, and having the passengers all come together to say ‘well done’ after the flight is a nice way of saying thanks.)

⇒ If an Airbnb has a cleaning fee, I shouldn’t be expected to leave it spotless. (I am paying for it to be cleaned after I leave. So I should be able to leave it in the same manner I would a hotel room.)

⇒ Solo vacations are much more enjoyable than vacations with others. (You avoid that clash of “Where do we go?” and What do we do?” next. You simply have to worry about yourself and do what you want to do…and eat where you want to eat!)

“Woke up today. It was terrible.” - Grumpy Cat