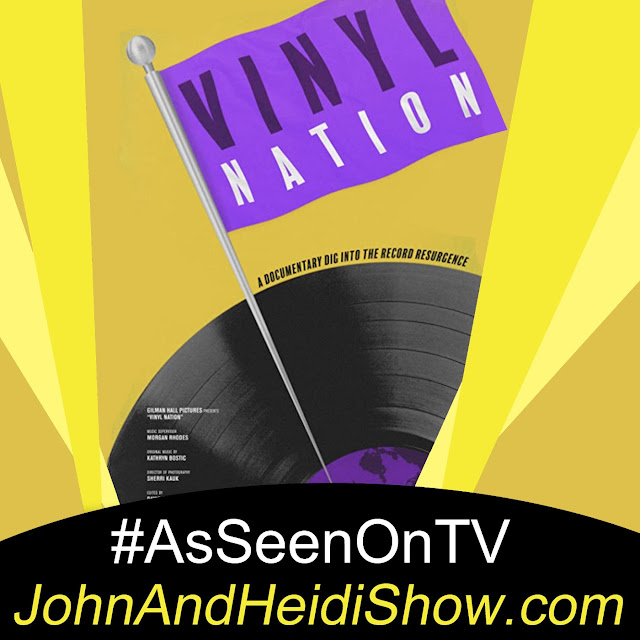 Today we visit with Kevin Smokler about his new documentary VINYL NATION.

We all know one. We just can’t say on the radio what they’re called. So instead, we’ll call them “jerks”. That one person who you just can’t stand, who drives you crazy, and you wish you never had to see them again. Researchers from the University of Georgia asked 400 people to think of the biggest “jerks” in their life, and the personality traits they regularly display. They found that the most likely people to be the “biggest jerks” are middle-aged men. Just to be clear, though, these aren’t the only people who display the traits of a “jerk”. The most common traits of “jerks”? Manipulative, aggressive, and entitled. And aside from middle-aged men, the survey found that half of the biggest “jerks” that came to people’s minds were their exes, former bosses or estranged family members. But for 1 in 3 people, unfortunately, the biggest “jerks” they know are still a constant presence in their life. This includes co-workers, friends, and even their current romantic partner!

A movie that was filmed in 2015 won’t be released until 2115. “100 Years”, with the tagline ‘The Movie You Will Never See’ stars John Malkovich, and is directed by “From Dusk Till Dawn’s” Robert Rodriguez. The short film imagines Earth 100 years in the future. And why, exactly, won’t it be released until 2115? Because it’s a promotion for Louis XIII Cognac — which also takes 100 years to properly age before it’s sold. Three teasers have been released, each showing a different vision of 2115. LINK: https://tinyurl.com/4fsram3n

Tom Hanks and Wilson reunited over the weekend! Hanks threw out the first pitch at the Cleveland Guardians’ home opener at against the San Francisco Giants on Friday, where he was joined by his very special co-star from the 2000 film “Cast Away”. On the pitcher’s mound, decked out in Guardians attire, Hanks held ‘Wilson’ over his head, showing off the volleyball and its signature red handprinted face on one side — and the Guardians’ logo on the other. After placing Wilson on the ground to throw the inaugural pitch, the ball moved around on the field — seemingly by remote control — which caused Hanks to l.o.l. He then threw a BASEball to home plate, to kick off the MLB team’s home opener.

Kaley Cuoco isn’t swearing off love, but the “Big Bang Theory” star is calling it quits on marriage. Cuoco, who has been divorced twice, told Glamour magazine that she still believes in love because she has had “incredible relationships”, but she “will never get married again” and “You can literally put that on the cover.” While she didn’t go into specifics on past relationships, Cuoco admitted that she is married to her career, first and foremost. She was first married to tennis pro Ryan Sweeting, then to equestrian Karl Cook. She and Cook announced their split in September after 3 years of marriage.

Keifer Sutherland is holding out hope for another run at the “24” franchise. The drama ran from 2001-10, plus a brief revival in 2014, but in a new interview with GQ, he said that Jack Bauer’s story is isn’t over. Of the series that made him a household name, Sutherland said: “I have learned that you’re just better off not to be definitive about your answer of whether you will do something or not do something. I love playing that character. I do believe the story is unresolved.” He indicated that if the right script came along, he’d be behind it, “even if my participation in that were to be limited.”

Baskin-Robbins is making some changes. The 77-year-old ice cream shop is not only tweaking its logo, employee uniforms and packaging to update the brand, it also plans to sell merch, including bikes, scrunchies and bucket hats, from an online store for the first time. And…the company is unveiling some new flavors: One is Non-Dairy Mint Chocochunk, another is Totally Unwrapped (made with peanut butter and chocolate ice creams, caramel swirls, fudge-covered pretzels, and fudge and caramel covered peanuts). They call that one a “deconstructed candy bar.” The third flavor, Ube Coconut Swirl, is made with coconut and ube ice creams. [A ube is a purple yam commonly used in Filipino desserts.]

The only muscle that never tires is the heart.

If you walked for 12 hours a day, it would take, on average, 690 days to walk around the world.

In blind “smell tests”, mothers rated their own baby’s diapers as the least smelly.

Question: They may not be very eager to admit it, but 1 in 8 men have done THIS in the last month. What is it?

A 21-year-old chihuahua has been named the world’s oldest dog. Guinness World Records has confirmed that TobyKeith, who lives in Florida, is the oldest living dog in the world, at 21 years and 100 days…as of today. Gisela Shore of Greenacres adopted TobyKeith from a shelter when he was just a few months old. Chihuahuas typically live 12-18 years. The oldest dog on record was an Australian cattle dog named Bluey, who died at the age of 29 years and 5 months in 1939.

You’ve likely heard “Liquor before beer, you’re in the clear; beer before liquor, get drunk quicker”, but have you heard THESE rules-of-thumb regarding drinking?

• Rye before Vermouth, pass out in a tollbooth.

• Cosmos before body shots of sake, excitedly sleep with someone stocky.

• Long Island Iced Teas before vodka-soaked Gummi Bears, throw up on the stairs.

• Tom Collins before a bucket of mead, forget how to read.

• Pilsners before absinthe, get stuck in a labyrinth.

• Accidentally swallow a cup of mouthwash before eating a scoop of dry margarita mix, get robbed at knife-point trying to scalp Bob Seger tix.

• Rubbing alcohol cut with a Kool-Aid Jammer before NyQuil before jungle juice, party forever by yourself. Party. Alone. Forever.

“I’m one stomach flu away from my goal weight.”