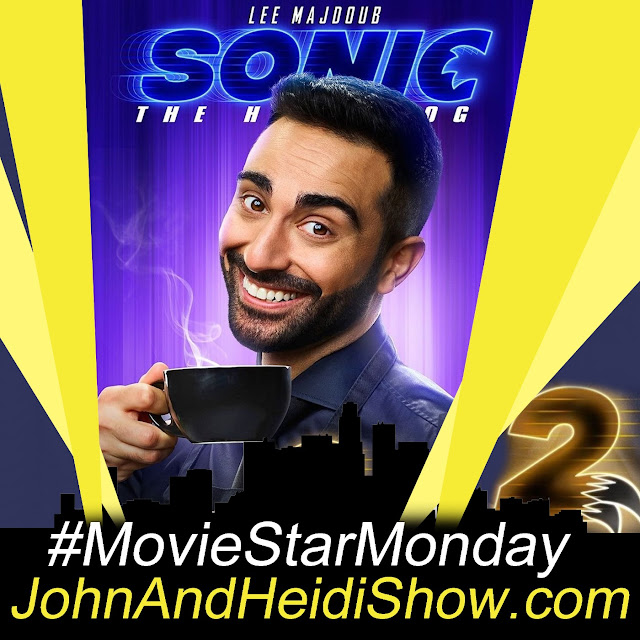 This #MovieStarMonday we visit with Lee Majdoub  ...known for his role as Agent Stone in Sonic the Hedgehog. He will reprise the role in the film's upcoming sequel, Sonic the Hedgehog 2. Majdoub has also appeared in the television programs, The 100, and Dirk Gently's Holistic Detective Agency.

Today is National Pet Day. According to a recent survey conducted by TopCashback.com, the USA’s most generous cash back site, 27 percent of Americans spend more money on their pet(s) than themselves.

Do you own a pet?

What kind of pet(s) do you have? [top four responses]

How many pets do you own? [top four responses]

On average, how much do you spend per pet each year (not including veterinarian expenses)?

Do you buy holiday-specific gifts/treats for your pet(s)?

Do you look for discounts when shopping for your pet(s)?

What’s your favorite thing about having a pet? (select all that apply) [top four responses]

Having a “no questions asked” companion (47 percent)

Dancing is good for a guy’s masculinity, according to a new study. Researchers in in Finland set out to discover what impact dancing during childhood has on men in adulthood. According to those they interviewed, dancing was a good way of expressing themselves physically and made them more positive about their bodies. It also helped them grow more confident in discussing life’s important questions. In Finland, the dance scene began emphasizing the masculinity of male dancers in the 1950s, and dancers were compared to top athletes, performing martial arts moves as part of their routines.

“Bridgerton” Season 2 has pushed the show to the #1 spot on Netflix’s worldwide Top 10 list for English language shows, becoming the streamer’s most-viewed English TV title in its premiere weekend. According Netflix, viewers watched more than 193 million hours of the show’s second season, which has just 8 episodes, and it only began streaming last Friday.

Hilaria Baldwin is expecting — for the seventh time. She announced the happy news on her Instagram with a video of her breaking the news to the rest of the family. She wrote: “After many ups and downs over the past few years, we have an exciting up, and a huge surprise: another Baldwinito is coming this fall.” She went on to write they she and Alec were “pretty sure” their family was complete, but are “beyond happy with this surprise”. They share 6 kids between the ages of 13 months and 8 years.

New photos from the “Game of Thrones prequel “House of the Dragon,” were shared, along with an official release date. HBO announced that the series will premiere on Aug. 21. They also released new teaser images from the series, including some of the never-before-seen characters. House of the Dragon will have an ensemble cast as big and intricately-woven as its predecessor.

MARRIED PEOPLE PROBLEMS:
(According to the married people of Twitter…)

⇒ Marriage is just your spouse perpetually standing in front of the kitchen drawer or cabinet you need to open. — SpacedMom

⇒ My wife gets mad if we put the milk back in the fridge with only one sip left which is weird based on all her 96% empty shampoo bottles. – Simon Holland

⇒ Sorry we’re late, my husband had to drive around the parking lot 5 times till he found a spot he liked. – Moderately Mom

⇒ Why throw it in the hamper when I can throw it on a chair that’s 2 feet away from the hamper. – My husband — Jawbreaker

⇒ my husband keeps telling me i have too many clothes . . . like a man who doesn’t want to be a husband anymore – That Mom Tho

⇒ After 22 years my best marriage advice is don’t marry someone who sets his two phones and alarm clock to go off at 5min intervals and then always hits snooze for at least an hour. – E.

Cats have fewer toes on their back paws.

The Los Angeles coroner’s department has a gift shop.

Drivers of expensive cars have been found to be less likely to slow down for pedestrians, and more likely to feel a sense of superiority over other drivers and to break traffic rules.

Studies show that bronze medalists are happier than silver medalists because they are happy just to get a medal at all.

A typical microwave oven uses more electricity operating its digital clock than it does heating food.

Question: A survey of parents with kids under the age of 14 say THIS is their biggest challenge each day. What is it?

Answer: Getting them out of bed

Over 40 dogs made a splash in Caracas, at the Venezuelan capital’s first canine pool party on Sunday. With pandemic restrictions easing, cafes and restaurants are livelier now, and pet care providers are getting in on the act, too. Veterinarian Otto Alvarado, who has been operating Pet Suites Hotel for 10 years, said that with things improving, it was time for the dogs to have a chance to socialize as well. The hotel, which costs $13 a day for a morning walk and playtime in the pool, hosted 42 pets for the shindig. Alvarado manages the hotel on a 1,200 square meter (12,900-square feet) grassy lot, with a staff of 6. During Venezuela’s 8-year economic collapse, many people couldn’t afford to keep their pets, and were forced to leave them in shelters. Now, with things looking better for people and for their pooches, the party place for pets, which can accommodate up to 100 dogs, is fully booked during holiday periods like Easter and Christmas. Another pool party is planned for April.

ADULT PROBLEMS WE WEREN’T READY FOR:
(According to an “AskReddit” thread…)

✗ Planning meals: “It’s such a chore to feed yourself every day…budgeting meals, and making sure you don’t get sick of the same meal because it was tasty and easy to make.”

✗ Every day on repeat: “Once you are “stable” your life is Groundhog Day. Same job every day, same foods over and over. Same shows and movies and songs…” (She must be listening to [***competition***!)

✗ Dust: “How did I not notice that it’s everywhere?”

✗ Chin hairs: “NOBODY told me females would have to deal with this. I feel like the bearded lady some days!”

✗ Nothing is free: “We spend roughly $1000.00 monthly between taxes and insurance, just to own stuff we already paid for.”

✗ Birthdays: “They will stop being fun and are gonna be a constant reminder that some day you’ll get very old and then…die!”

Cal: “You are really pushing my buttons today.”

A man has been living in the Beijing International Airport for 14 years so he can smoke cigarettes and drink alcohol without his family nagging him. It’s a story with shades of the Tom Hanks movie “The Terminal”, except this guy has been living in an airport of his own free will. After losing his job, Wei Jianguo says he simply spent his days drinking and smoking. His family eventually told him he had to give up his 2 biggest pleasures if he wanted to continue living in the family home. That wasn’t an option, so he simply moved into the airport. As he told a reporter, “My family told me if I wanted to stay, I had to quit smoking and drinking (and) give them my monthly government allowance. But then how would I buy my cigarettes and alcohol?”