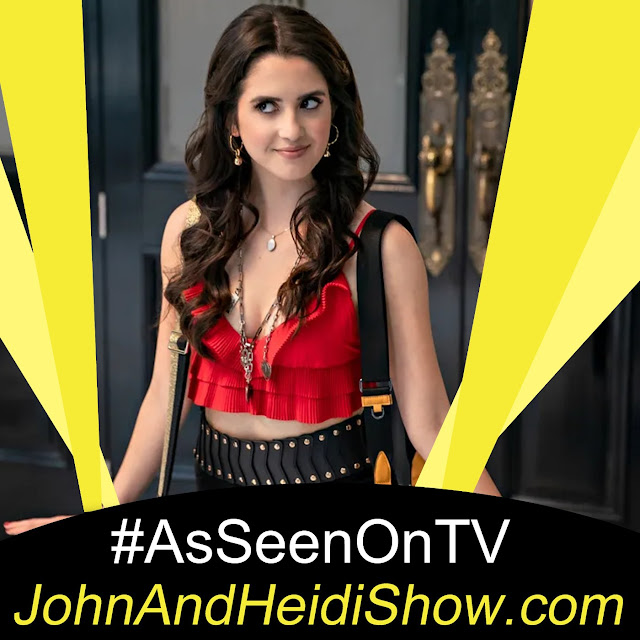 Today we visit with Laura Marano. She starred in the Disney Channel series Austin & Ally (as Ally Dawson)... she was one of the five original classmates in "Are You Smarter than a 5th Grader?”... and has most recently starred in Netflix’s THE PERFECT DATE (she won the Teen Choice Award for Choice Comedy Movie Actress). We will talk to her about her latest film THE ROYAL TREATMENT which debuted on Netflix in January. (she also produced the film) https://www.youtube.com/watch?v=KWxJXZ3S3-g

Eating leafy greens like broccoli isn’t just good for you, it could help end the pandemic. Johns Hopkins Children’s Center researchers discovered that a chemical found within broccoli and other cruciferous vegetables may offer a potent new way of fighting both COVID-19 and the common cold. The plant-derived chemical, called sulforaphane, was found to inhibit the replication of SARS-CoV-2 (the virus responsible for COVID-19), and other coronaviruses. Earlier studies have connected sulforaphane with cancer-preventing benefits. The compound is also abundant in brussels sprouts, kale, and cabbage.

An Ohio therapy dog has been named the 2022 Cadbury Easter Bunny. Annie Rose, an English doodle, won a national voting contest among an impressive field of candidates, including a bearded dragon, hedgehog, and llama. She follows in the minuscule footsteps of last year’s winner, a tiny tree frog from Florida named Betty. As Cadbury’s “spokesbunny,” Annie Rose will star in a Cadbury commercial, probably as a rabbit that clucks like a chicken, and take home a $5,000 prize. Cadbury will also donate $20,000 to The American Society for the Prevention of Cruelty to Animals. SNEAK PEAK: https://www.youtube.com/watch?v=_DPCaCIn2g0

After repeated pandemic-related delays, “Top Gun: Maverick” is flying onto the big screen on May 27. And the film’s final pre-release trailer rewards our patience with lots of high-flying action and a special appearance by one of cinema’s chillest characters. We finally have our first sighting of ‘Tom Kazansky’ aka “Iceman” in Maverick, and Val Kilmer’s alter ego has clearly had an eventful Navy career during the 36-year gap since the first “Top Gun”. Although this is Iceman’s first appearance in a Maverick trailer, his presence has been an open secret since the film went into production in 2018, even as the actor battled throat cancer. LINK: https://youtu.be/giXco2jaZ_4

“Jeopardy!” viewers were surprised when an unexpected glitch spoiled a recent episode's outcome. While contestants usually make the headlines for their mistakes or funny wrong answers, this time, it was the production team in the spotlight. The incident occurred halfway through Monday’s episode, when the contestants’ podiums suddenly displayed their final scores. It showed that contestant Jackie Kelly finished with a winning total of $28,801 while fellow contestant Amie Walker came in third place with $1,000. Some eagle-eyed viewers picked up on the strange glitch and took to social media to share their confusion.

With the way gas prices have been going lately, it may come as no surprise, but a new report has found that despite their higher initial price tags, electric vehicles are cheaper to own over the long run. The report from Vancouver’s Simon Fraser University calculated total ownership costs of several electric and gas vehicles over 8 years, driving 20,000 km a year. It found that going electric would save drivers a total of more than $19,000. And that was with gas costs at 2021 levels. When you factor in recent pump prices, the savings rose to about $24,000.

Tim Hortons restaurants is testing new drive-thru technology in Ontario that they say will not only get customers get their orders faster, it’ll do so without any face-to-face interaction with staff. The famous Canadian coffee shop is testing what is calls “automated drive-thru pickup points.” How does it work? The new technology is hosted in a second drive-thru lane, allowing 2 customers to order at the same time. A conveyer belt moves a guest’s order above the first drive-thru lane, to the second. After paying, the customer receives their order through an automated receiving box with electric doors. The first trial of the technology was launched at a Tim Hortons location in Tecumseh, near Windsor, ON. LINK: https://tinyurl.com/kpf7nv6p

Males of many species act like infants to woo potential mates.

Because the speed of earth’s rotation changes over time, a day in the age of dinosaurs was just 23 hours long.

The Eiffel Tower was initially considered to be an eyesore. Its usefulness as a radio tower saved it from being dismantled in 1909.

Question: A survey says that almost 1/3 of people never do THIS at the gym. What is it?

Auction house Sotheby’s expects to fetch up to $551,000 for an unusual item — a receipt for a piece of invisible art by French artist Yves Klein. Klein sold numerous pieces of imaginary art, which he dubbed “Zones of Immaterial Pictorial Sensibility”, in exchange pure gold, and issued receipts to the buyers. The receipt up for auction April 6 is dated Dec. 7, 1959. The auction house said those receipts are rare today because Klein invited buyers to participate in a ritual that involved burning the receipt and throwing half of the gold into the Seine River in order to make the buyer the “definitive owner” of the conceptual artwork.

• “If at First You Don’t Succeed, Lower Your Standards”

• “Overcoming Your Superstitions in 13 Easy Steps”

• “How to Stop Shoplifting Books”

• “How to Run From Your Problems and Avoid Responsibilities”

• “Garfunkel’s Guide to Being the Popular One”

• “You Got the Wrong Self Help Book: Can’t You Do Anything Right?”

• “Have You Considered Just Giving Up?”

“The worst part of online shopping is having to get up and get your credit card from your purse.” - Anonymous

Parents of students at an Indiana elementary school say they received some unexpectedly hilarious photos after green screens were used for school picture day — on St. Patrick’s Day. Amanda Snow, whose son, Oliver, attends Sugar Grove Elementary School, sent her son, Oliver, to school for picture day wearing a dark green shirt. Oliver also wore a hoodie that is partially green, and she says: “so he turned into the fence. He had lime green shorts on, so I guess the darker the shirt, the more transparent the background comes through. And he had a green mohawk, but that is completely gone.” After posting about it in a Facebook mom’s group, other parents shared photos of their children’s torsos similarly disappearing into the background due to their green clothing. LINK: https://youtu.be/dFH8kvVnZns