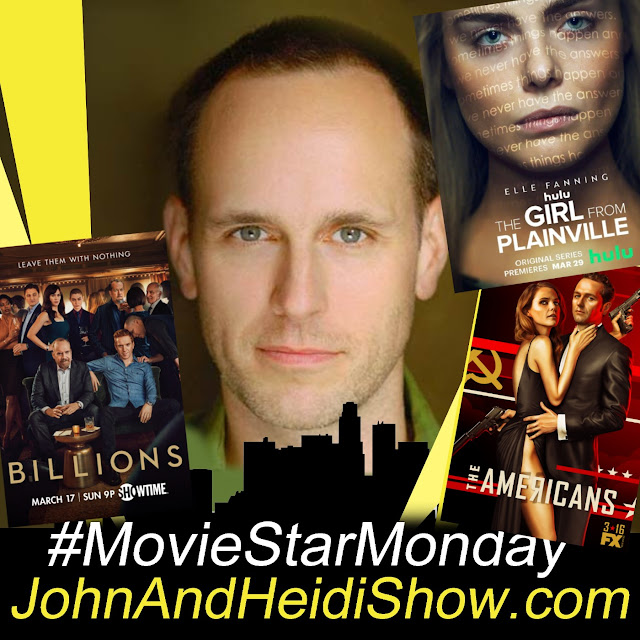 This #MovieStarMonday we visit with Kelly Aucoin, he plays "Dollar" Bill Stern on Billions, and Pastor Tim on The Americans. We will talk about his new Hulu series THE GIRL FROM PLAINVILLE (premiered March 29th) Inspired by the true story of Michelle Carter’s controversial “texting-suicide” case. Based off the Esquire article of the same name by Jesse Barron, the limited series explores Carter’s relationship, the events that led to the death of Conrad Roy III, and, later, her controversial conviction of involuntary manslaughter. Kelly stars as Scott Gordon, the Fairhaven detective who is head of the investigation, alongside Elle Fanning and Chloe Sevigny. Trailer: https://www.youtube.com/watch?v=B-RadqZ-A3o

As the world continues to stress about whether or not we should be wearing a mask, the results of a recent study just might convince many of us to keep strapping them on. Wearing a mask makes you more attractive, according to a study at Cardiff University’s School of Psychology in the UK. Typical blue medical masks were associated with being the most attractive, and cloth masks came in a close second, still making faces appear “significantly more attractive”. In the study, female participants viewed 4 photos of a man with a medical mask, a cloth mask, a book covering half his face and no covering. Medical masks came out on top, with cloth coming in close second and no covering ranking last. The researchers say the results suggest that covering the bottom half of your face in any way, whether you are “hot or not”, increases your attractiveness (that means the results aren’t necessarily about hiding unattractive qualities). It could be that covering the bottom half of your face brings a certain allure and sense of mystery. Masks also force attention on the eyes and hair — 2 of our most engaging facial features, the study noted.

The password “Password” allowed hackers to break in to a server, steal data and issue a $15 million ransom demand to the victim. The victim was credit reporting giant TransUnion’s South Africa unit, which maintains credit data on more than 24 million people. The attacker was a Brazilian group that calls itself N4ughtysecTU. One of the accounts on the server had been secured with the password “Password”, which takes modern hacking tools about one second to guess.

Amber Heard is calling on several famous acquaintances for her upcoming defamation trial with ex-husband Johnny Depp. She’s being sued by Depp over a 2018 Washington Post op-ed where she wrote about surviving domestic violence. She’s set to have James Franco, Ellen Barkin, and Elon Musk testify virtually as witnesses for her at the trial. Paul Bettany will testify virtually for Depp, after the star’s texts with Depp were made public in the previous trial between Heard and Depp. This trial is officially set to begin April 11, in Virginia.

Amanda Bynes can now make personal and financial decisions on her own after a judge officially put an end to her 9-year conservatorship. The judge issued a tentative ruling on Monday, saying the conservatorship is “no longer required”, and on Tuesday it was made official at a hearing. The former child star filed the docs in February, asking for her mother to no longer serve as conservator. The arrangement was first put in place in 2013, when Bynes was experiencing personal difficulties.

“And Just Like That,” the show that caused the internet to explode in conversation each week, has been renewed for a second season by HBO Max. Casey Bloys, the chief content officer for HBO and HBO Max, said that “And Just Like that” has been the streamer’s most successful original series to date. The renewal announcement also confirmed the returns of Sarah Jessica Parker, Cynthia Nixon and Kristin Davis.

There’s nothing worse than being caught in a conversation with someone who is deathly boring . . . but thinks they’re a scintillating conversationalist. Well, science to the rescue. Researchers at the University of Essex investigated what makes people appear boring. They asked over 500 people to rank the most stereotypically boring characteristics, hobbies, and jobs. The most boring jobs were determined to be: accounting, tax/insurance, cleaning, and banking. The most boring hobbies: sleeping (huh?), religion, watching TV, observing animals, and doing math. And what are the characteristics of stereotypical bores? Having no interests, no sense of humor, being unopinionated, or a complainer. The research team concluded: “The more (of these) typical features of stereotypical boringness described a person, the more the person was perceived as boring.”

Hollywood heavy hitters terrified of a dramatic spike in crime are laying out millions for panic rooms. According to the Hollywood Reporter, the rich and famous of posh areas of Southern California have become increasingly paranoid over a worrying spike in homicides and high-profile robberies. Among the stars with panic rooms are Madonna, George Clooney and Paul McCartney. A small, closet-sized panic room runs about $100,000 to $150,000 — and from there, they get expensive. Increasingly, panic rooms are designed with luxury in mind, rather than a cold, steel cell. Others are packed with guns and ammo.

If you commit any crime at sea, you are considered a pirate.

A duel between three people is called a “truel”.

Though not commonly used, the day after tomorrow is called “overmorrow.”

Question: In a survey, 59% of people said they would not buy THESE used?

A man was shocked to wake up and find a complete stranger had decided to park on his driveway – and it wasn’t just for a few hours. Zekarias Haile, who lives near Manchester Airport in the UK, says the car was left in his driveway by someone headed off for spring break who didn’t want to fork out for expensive parking at the airport. Which would make sense, considering the Range Rover remained there for FOUR DAYS! Haile called cops who told him it was not a criminal act, so they couldn’t help him. The car stayed in place for the entire weekend but it had gone when Haile got up on Monday morning. Fortunately, he had parked his own car on the road.

(American Kennel Club’s annual list of most popular dog breeds in the US, based on registrations…)

Coming in last place out of 197 breeds — the Norwegian lundehund. The dog’s name literally translates to “puffin dog.”

“Why can’t you just be happy for me and then go home and talk behind my back later like a normal person?” - Lillian (Maya Rudolph), Bridesmaids