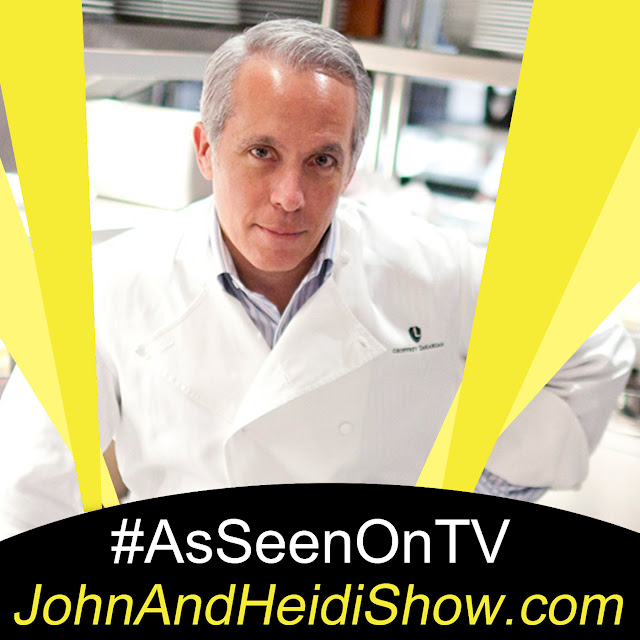 Today we visit with Celebrity Chef Geoffrey Zakarian about his new Food Network competition series BIG RESTAURANT BET, which follows acclaimed chef and restaurateur, Geoffrey Zakarian, on his quest to invest $250,000 of his resources for the next rising star in the restaurant world. The series will premiere on Food Network and be available to stream weekly on discovery+ beginning Tuesday, April 5, 2022.

The relationships you have with co-workers are some of the most important – and complicated ones you’ll ever experience. And of course, a bad relationship with a colleague can make you dread going to the office. So, listen up, and don’t be one of THESE: Quality Logo Products in the US surveyed almost 2,000 employees to determine the most annoying habits of co-workers. The top-3, in order, are: Interrupting, Taking credit for someone else’s work, and Oversharing. Some other findings of the survey: 90% of people have a co-worker who annoys them, and 57% have quit, or considered quitting because of an irritating co-worker. 55% of those who work from home still become annoyed with a co-worker several times a week. For remote workers, the top pet peeves include slow responses to emails or instant messages, excessive background noise on calls, and eating on camera.

Spring Fever is a real physical condition which commonly occurs when a sudden warm spell follows a long cold period. When the temperature rises, the body needs to get rid of heat; thus, there’s a dilation or expansion of the blood vessels so that blood can be carried to the body surface where heat can be lost quickly. Some people experience an energetic feeling when this change happens, due to the body’s reaction to the great amount of internal work going on.

Dolly Parton has long teased a biopic for the big screen, along the lines of other music legends like Elton John, Johnny Cash and Patsy Cline. And now, Parton revealed who she would want to play her former musical partner Porter Wagoner. She feels there is only one actor who could play Wagoner: Jim Carrey. As for who will play HER on the big screen, Parton said: “I love Kristin Chenoweth. She’s just absolutely fantastic.”

“The Walking Dead” star Norman Reedus has suffered a concussion on-set of the popular AMC show. The incident occurred on March 11 in Georgia. In a statement, his publicist said: “He is recovering well and will return to work soon.” Reedus is currently filming the 11th and final season of the zombie-horror series. Reedus’ concussion is expected to delay the show’s wrap by a few days. It’s unclear exactly how the injury occurred.

Anna Sorokin, who was born in Russia and became a German citizen as a teen, is being deported to Germany after exhausting appeals to remain in the U.S. The subject of the Netflix hit “Inventing Anna” had fought to stay in the United States. She became notorious for creating a fake identity as German heiress Anna Delvey, which she used to scam financial institutions, banks, hotels and individuals to the tune of $275,000. She was arrested in 2017, convicted of grand larceny in New York court in 2019, and was sentenced to 4-12 years in prison.

Every house has one — the junk drawer. What’s something every junk drawer must have in order to be considered a junk drawer?

• A screw that looks too important to throw out but you have no idea where it came from.

• Those felt circles for the bottoms of chairs.

• An assortment of single batteries.

In Germany, a man accidentally put the wrong type of fuel into his car. A mechanic told they could take care of the problem for around $350. Too rich for this man, who decided to take care of it himself. He first tried to siphon out the fuel with a garden hose, but that didn’t work. Then he tried to use a vacuum cleaner to suck it out. That blew up the car.

A thief in the UK showed up at a house with the intention of stealing a satellite dish. He climbed on the roof and started yanking at the dish, when the owner started yelling because the sporting event he was watching went black. He went outside to investigate and found the thief trying to rip the dish from his roof. One angry yell was enough to chase the man away.

No matter how badly fingerprints are damaged, they will always grow back in their original pattern.

Elephants sing to each other, but their songs are in a frequency too low for humans to hear.

A dolphin’s blowhole is an evolved nose that has moved upward to the top of its head.

Perspiration is odorless; it is the bacteria on the skin that creates an odor.

Just 30 minutes of daily complaining can physically damage your brain. And listening to someone else constantly complain also negatively affects brain function.

Question: The average couple spends 10 minutes a day arguing about THIS. What is it?

Answer: What (or where) to eat

Mike Tyson’s weed company is selling edibles in the shape of an ear. In a nod to the infamous 1997 ring incident when the boxer got a mouth-full of Evander Holyfield’s ear, Tyson, who has been selling cannabis products since 2016, is now marketing “Mike Bites”, ear-shaped edibles with a bite mark at the top of the gummy, exactly where Tyson took off a piece of Holyfield’s cartilage. Tyson gave the product personal approval, responding to a tweet about the new product by writing, “THESE ears actually taste good!” Tyson is believed to earn about $1 million per month through his cannabis brand Tyson 2.0.