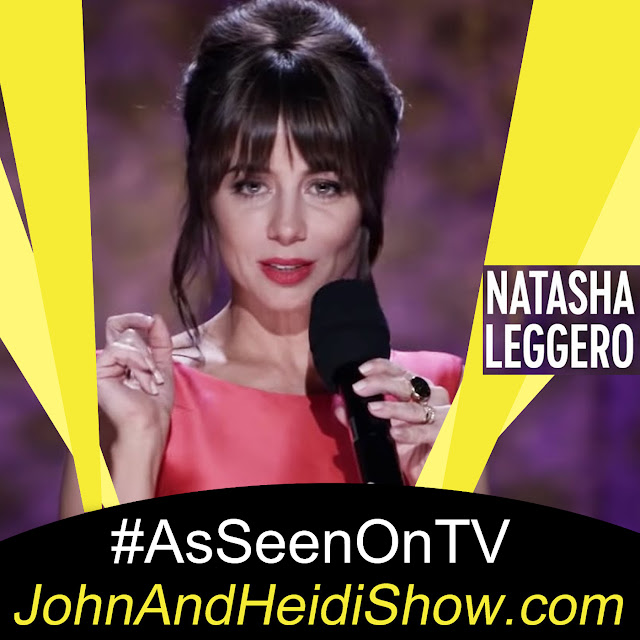 This weekend we visit with actress and comedian Natasha Leggero. Her new show Rat In The Kitchen on TBS has been out for a bit now and people seem to love it! https://www.tbs.com/shows/rat-in-the-kitchen


If you’re taking part in the intermittent fasting trend to lose weight, you might as well go grab a sandwich. A study published Thursday in the New England Journal of Medicine found that time-restricted eating, where participants only allow themselves food inside a window of as little as 6 hours per day, is no more effective than traditional calorie counting. Researchers in China followed 139 patients with obesity for 12 months. One group was put on time-restricted eating – with calorie restriction, and the other was just put on a restricted calorie diet. Both groups lost an average of 14-18 pounds (6.4-8.2 kg). There was also barely a difference in BMI, waist circumference, body fat or metabolic risk factors.

The European Parliament has approved plans to require mobile phone companies to use the same charger for their products. Under the plan, which could be in effect by 2026, companies will be required to adopt USB-C ports on all devices, allowing for more interoperability and healthier competition between brands, as well as cutting waste. The rule would only apply to countries within the European Union, but given the impact it’d have on production lines, it is expected other countries would conform.


“Jeopardy!” has a brand-new winner on the books. 23-year-old Mattea Roach scored her 14th win on Friday, earning a spot among the top contestants on the long-running game show. Roach took home $34,000 during the episode, binging her prize money to a whopping $320,081 total. The Toronto-based tutor cemented her position in the “Jeopardy!” record books by becoming 8th on the all-time consecutive games list, and 10th on the all-time highest non-tournament cash winnings list — so far. Across her 14 games, Roach has answered 93% of her clues correctly.

In his new comedy “The Unbearable Weight of Massive Talent”, Nicolas Cage plays a fictionalized version of himself who’s always seeking the next role to put himself back on the map. As a result, he’s not the most attentive dad to his daughter (played by Lily Sheen). But in an interview with People, Cage said that in real life, he has always put his work second to family matters. Quote: “I turned down (roles in) “Lord of the Rings” and I turned down “Matrix” because I didn’t want to go to New Zealand or Australia for 3 years because I needed to be home with my son Weston, that’s a fact.” His point? “There is a huge disparity between that Nick Cage in Massive Talent and the Nick Cage sitting in front of you.” Cage’s son Weston is now 31, and he’s also dad to 16-year-old son Kal-El – and he and wife Riko Shibata are expecting a baby later this year.

How to properly mow your lawn for best results

☞ Set your mower high: Only cut the top ⅓ of the blades. Longer grass can grow and support more roots, and develop a deeper root system. It’s also softer to walk on.

☞ Mow a dry lawn: Wet grass can clog your mower and result in an uneven trim. The best time to mow is early evening, if it hasn’t rained. Then, it’s not so hot that it stresses the lawn, and it will have time to recover before the next day’s heat.

☞ Don’t mow on a schedule: Mow as often as needed, but sticking to a schedule (like every Sat. morning) doesn’t take into account that grass grows rapidly in spring, and very slowly in the heat of summer.

☞ Leave clippings on the lawn: They break down quickly and return beneficial nutrients to the soil. Mow often enough that clippings are small.

☞ Keep your mower blade sharp: Dull blades tear up grass, causing ragged, brown edges. Over time, it can cause your grass to weaken, making it more susceptible to disease, insect damage, and other stresses like heat and drought. An annual mower tune-up and sharpening should do it.

Ingesting too much nutmeg can be toxic. 2 to 3 teaspoons of raw nutmeg can induce hallucinations, convulsions, pain, nausea, and paranoia that can last for several days.

Men and women who listen to similar music tend to be better communicators and have longer- lasting relationships.

According to a poll, doctors and lawyers are the worst tippers.

A part of your brain is devoted solely to sneezing.

TV Guide’s 2009 pick for the worst show of all-time was “The Jerry Springer Show”.

Dogs who bark a lot can get laryngitis.

Question: Almost 40% of people agree that THIS instantly makes someone more attractive. What is it?

⇒ Pet Airways: Founded in Florida in 2009, it was exclusively dedicated to pets such as cats and dogs — or “pawsengers”. They flew, without their owners, in aircraft in which the seats had been replaced with carriers. Although it went broke in 2012, its website claims flights will return later this year. (Sounds like they’ve got another dog in the flight!)

⇒ The Lord’s Airline: No alcohol on board, Bibles instead of in-flight magazines, only religious movies, and 25% of all fares going to finance missionary work. These were all features of The Lord’s Airline, founded in 1985. The plan was to have 3 weekly flights to the Holy Land from Miami, but by 1987 the airline lost its FAA license, and it fizzled in a sea of financial controversy.

⇒ Smokers Express: After smoking was banned on domestic US flights in 1990, 2 Florida men decided to circumvent the rule by establishing an airline based on a private club. It required a $25 membership fee, with the plan to offer steaks and burgers on board, with a side of free cigarettes. The airline never received a license to operate, and though it sold over 5,000 memberships, it disappeared in a puff of smoke.

⇒ MGM Grand Air: In 1987, it billed itself as a first-class only, superluxury airline that carried no more than 33 passengers. It promised special lounges at airports with concierge service, no lineups or check-ins, and porters to fetch your luggage. On board was a stand-up bar and private compartments for meetings. Full meal service with fine wine and champagne was always available, and the restroom had golden faucets. But in the 90s, as private jets became popular, the airline was sold.

⇒ Hooters Air: Yup, modelled on the restaurant chain famous for its tank-top and short orange shorts-wearing servers. The airline also had “Hooters girls” on board to mingle with passengers and host games, but food service was handled by actual flight attendants. And, yes, the planes did feature the same famous googly-eyed owl logo made famous by the restaurant.

• Whyzit there isn’t a special name for the tops of your feet?

• Whyzit so many animals are named after cars?

• Whyzit fluffy kitties are so often used in toilet paper ads? Are they saying if you run out, you can always use a cat?

• Whyzit no one has ever measured the ‘speed of dark’?

• Whyzit you can wear a bikini in public, but not underwear?

"Life is short. Drive fast and leave a sexy corpse. That's one of my mottos."