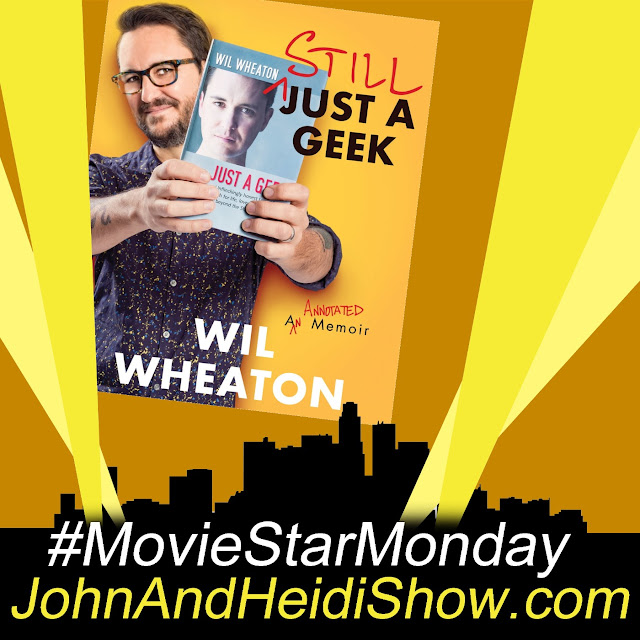 This #MovieStarMonday we visit with Wil Wheaton (Stand By Me, Star Trek, Big Bang Theory & more) Wil has a NEW BOOK out now... it's called STILL JUST A GEEK.

Your usual walking speed is linked to the rate at which you’ll age, according to researchers at the University of Leicester. In an analysis of over 400,000 adults, they determined that a faster walking pace throughout life could lead to a person being 16 years younger in terms of biological age by the time they reach midlife. The team found that, specifically, brisk walking while alone is associated with a longer life.

China is using an army of geese to defend its border. On China’s boundary with Vietnam, a gaggle of about 500 geese stand guard, ready to honk at or bite anyone who tries to enter illegally. Since October, the Chinese government has deployed the gaggle of geese spanning 300 miles in an effort to stop the coronavirus from entering the country via illegal immigration. Chinese domestic geese need no training; and the 5-pound birds defend their territory fiercely. Reinforcing the feathered garrison are about 400 guard dogs, which accompany border police on patrol while the birds keep stationary watch.

Following the success of “Venom: Let There Be Carnage” and “Ghostbusters: Afterlife”, Sony announced at CinemaCon that new sequels for both franchises have been greenlit. “Venom 3” film comes after Let There Be Carnage grossed $502 million in theaters, without the help of a release in China. Ghostbusters: Afterlife had a more modest box office run but still did well, making $197 million. The upcoming sequel was described as “the next chapter in the original ‘Ghostbusters’ universe,” after a post-credits scene in “Afterlife” in which original Ghostbuster ‘Winston Zeddermore’, played by Ernie Hudson, teased a possible reunion with his teammates.

Jon Stewart used his speech as this year’s winner of the Mark Twain Prize for American Humor to poke fun at the idea that his art form is under threat, saying: “Comedy survives every moment.” Stewart, speaking at the first iteration of the ceremony in more than 2 years, added: “Comedy doesn’t change the world, but it’s a bellwether…When society is under threat, comedians are the ones who get sent away first.” The ceremony saw contributions and roasts from friends, supporters and collaborators, including Dave Chappelle, Jimmy Kimmel, Steve Carell and Olivia Munn.

These days, many dieticians are telling us to do what perhaps you’ve always them to tell us: “Stop dieting.” These anti-diet dieticians (many of whom are getting the word out via TikTok, using dances, trends and science-backed info to reach younger people) are trying to steer people away from what they call “diet culture,” which prioritizes smaller sizes over health, and drastic restriction over lifestyle changes. Where professionals once may have stressed maximizing “good” foods and cutting out the “bad,” these social-media-friendly experts are preaching the maximizing of balanced, sustainable changes and ending food-based shame. Sam Previte, a registered dietician and founder of Find Food Freedom says: “If we are experiencing guilt and shame with food, we could have the most nutrient-dense meal plan in the world, and it’s not going to be beneficial because of … the psychological effects of dieting and restricting.

“Princess Bride” star Cary Elwes got way more than he bargained for when a day of yard work turned into a helicopter ride to hospital after a nasty rattlesnake bite. Elwes was airlifted to Ronald Reagan UCLA Medical Center Saturday after he was bitten by a rattlesnake near his Malibu home. Reportedly, the injury appeared serious enough that those around him felt it was a life-threatening injury. The good news is that Elwes is expected to make a full recovery. It’s unclear where he was bitten.

Cheetahs can’t roar, but they can purr, meow, hiss, and growl, similar to a housecat.

Water makes different pouring sounds depending on its temperature.

Riding a roller coaster can help you pass a kidney stone, especially if you’re seated in the rear car.

On Good Friday in 1930, the BBC reported, “There is no news.” Then played piano music.

In 2005, Australian Parliament banned staff from using the word “mate.” The Prime Minister objected, saying “mate” was an important part of Australian culture, and the ban was overturned within 24 hours.

Roughly 33% of cats are not affected by catnip.

Question: The average person experiences THIS for the first time at age 47. What is it?

✓ Snow isn’t white. It’s actually translucent. Light reflects from the many sides of every snowflake, diffusing the color spectrum and making it appear white. (I’m dreaming of a translucent Christmas?)

✓ Wind is silent. At least, until it comes into contact with an object. Then, friction, rolling or rubbing causes the “wind” sound.

✓ Raindrops are fast. Most physicists agree the average raindrop falls at a speed od 9-10 meters per second, about 22mph (35.4km/h).

✓ …and they’re not teardrop-shaped. Many factors, like gravity and air resistance can affect the shape, but overall, smaller droplets are spherical, while larger drops have a domed shape.

✓ The wettest place on Earth is in India. With a long monsoon season, Mawsynram in eastern India experiences average annual rainfall of 467.4 inches (11,872mm), about as high as a 3-storey house.

✓ Yuma, Arizona is the sunniest place on Earth. Residents enjoy 11 hours of sunlight daily in winter and up to 13 in summer. And just 7.8 inches (200mm) of rain per year.

✓ Aomori City in Japan is the snowiest city on Earth. With average snowfall of 26 feet (8m) per year, it’s not unusual to find yourself driving along walls of snow.

Ever been just a little late in learning or picking up on something? And been left totally bamboozled, thinking, “how have I been alive this long without realizing this???” Here are some true confessions from a recent Reddit thread . . .

☞ “I was almost 40 when I learned I am allergic to bananas. I thought everyone’s mouth got itchy when they ate them.”

☞ “That ponies are NOT baby horses; they’re a breed of horse.”

☞ “That sodas are called ‘soft drinks’ because they have no ‘hard’ alcohol.”

☞ “That baby carrots are just shaved down big carrots. I was devastated a few years ago.”

☞ “I thought the ‘D’ is Disney was just some random symbol, kinda like a backward G. It took me until seventh grade to realize it’s a ‘D.'”

☞ “That ‘rotating tires’ doesn’t mean spinning them around in place like you’re in a Fast and the Furious movie. It means you swap each of their positions on the car.”

"There is no sunrise so beautiful that it is worth waking me up to see it."