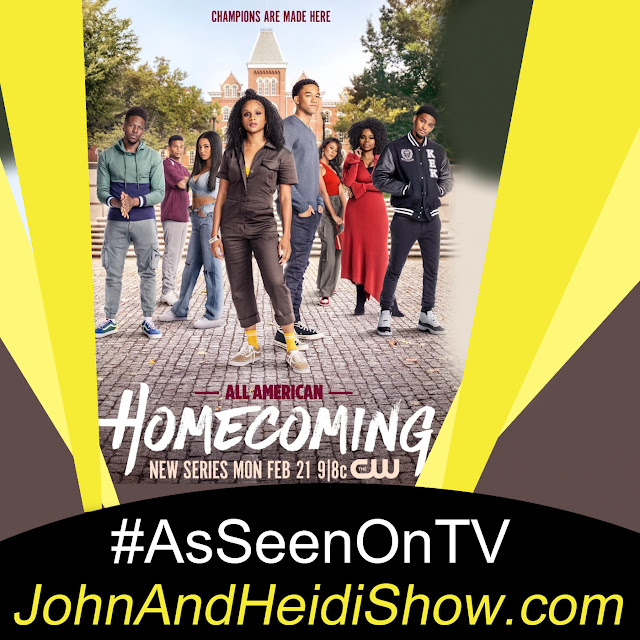 Today we visit with Geffri Maya from All American Homecoming on the CW.

National Poem In Your Pocket Day

A new study says it’s not YOUR fault if your mother-in-law hates you. The research, published in the Evolutionary Psychological Science journal, found that most conflicts between spouses and their mothers-in-law revolve around financial resources and child care. The study says that these conflicts may be “influenced by genetic conflict” as each person “unconsciously acts in the interest of their genetic kin”. In other words, your in-law is programmed make the kids (and your spouse) a priority over you, and you are similarly inclined make the kids lives (and your spouse) the most important things, over her. Animosity with in-laws is also likely caused by the fact that they “do not choose to have relationships” with you, but are forced into it through their children’s romantic relationships.

Nearly every afternoon from September to March, a thunderstorm develops over the Tiwi Islands in northern Australia. In fact, it happens so regularly, the Bureau of Meteorology actually refers to it by name — Hector. At 3pm daily, people are known to line the shores of Darwin, about 100km (62 miles) away, just to snap pictures of the storm forming. “Hector” also known as “Hector the Convector,” is one of the world’s most consistently large thunderstorms, reaching heights of approximately 20km (66,000 ft). LINK: https://tinyurl.com/mr29c2sh

Tom Cruise, Helen Mirren and Damian Lewis will take part in the live TV special “The Queen’s Platinum Jubilee” on May 15. The program, airing live from the grounds at Windsor Castle, will feature 1,300 performers and 500 horses, plus the likes of Andrew Lloyd Webber, Dame Joan Collins, a number of British TV and film stars, and a 75-piece orchestra. Mirren, who played Elizabeth in 2006’s “The Queen”, will play Queen Elizabeth I during a theatrical event. It will be the first televised event to mark 96-year-old Elizabeth II’s 70 years as monarch and will air on the UK’s ITV.

Expect a slap-free Tony Awards ceremony. Tonys organizers have put the word out that they will not tolerate any violence, like what happened at the Oscars. Following the Will Smith-Chris Rock incident at the 94th Academy Awards ceremony, a letter has been sent to potential Tony Awards ticket buyers, which includes a new warning in its FAQ section. The warning states: “The Tony Awards has a strict no violence policy. In the event of an incident, the perpetrator will be removed from the event immediately.” The Tonys will be presented on Sunday, June 12, at Radio City Music Hall. It will air on CBS and Paramount+.

Scroll to the side, Facebook and Instagram. There’s a newer photo-sharing app out there – with an interesting twist. The BeReal social media app is enjoying a surge in popularity among young people, which might be surprising – given the fact that it prohibits edited photos. BeReal (get it?) encourages users to share a slice of their life in real time – with a focus on authenticity. Users are invited once a day that it’s time to ‘BeReal’ and share a photo of what they’re doing at that moment, giving friends and others a candid glimpse into their life. There are no filters or edit buttons, so if your hair is a mess, or your only view is of your kid’s spit-up on the carpet, that’s what people will see. Once you receive the notification (which can happen at any time during the day, you have 2 minutes to snap and post a photo of what you’re doing, no matter how mundane. Some users point out that social media was originally intended to allow friends and family to keep up with your life, and BeReal does that more effectively than most other social media platforms.

Sure, long fingernails may make a fashion statement, but the longer they are, the more likely it is they contain microorganisms that can cause infections, according to a new report. American University researchers say studies have found 32 different bacteria and 28 different fungi underneath fingernails. And that goes for artificial nails, long natural nails, gel nails, acrylic nails, and even nail polish. All these increase the probability that microorganisms lurk underneath them, which also makes it more difficult to wash off with simple handwashing. One study found a resistant bacterium in half of fingernail samples, which could lead to an infection. Fingernail bacteria can be transmitted to one’s system via scratching, nail-biting, nose-picking and finger-sucking, according to a biology professor. The bacteria and fungi underneath long nails can also lead to a nail infection, which could leave the fingernails disfigured.

Pringles are not actually potato chips.

Showering has been shown to spark creativity.

Space smells like seared steak, according to those who know.

Human lips are hundreds of times more sensitive than the tips of a person’s fingers.

By the end of a person’s life, they can recall, on average, around 150 trillion pieces of information.

Contrary to what you may have heard, redheads aren’t actually going extinct.

Question: In a new survey asking what is the most important invention, “the wheel” came in at #1. What was second?

Japanese researchers have developed computerized chopsticks that enhance salty tastes. Why? The idea is to help those who need to reduce sodium in their diets. The chopsticks enhance tastes using electrical stimulation and a mini-computer worn on a wristband. It uses a weak electrical current to transmit sodium ions from food, through the chopsticks, to the mouth — where they create a sense of saltiness, according to inventor Homei Miyashita of Meiji University. He says the salty taste is enhanced 1.5 times. Excess sodium intake is related to high blood pressure, strokes and other ailments. By the way, Miyashita and his lab have explored other ways that technology can stimulate human sensory experiences – and also came up with a lickable TV screen that can imitate various food flavors.

…according to Euromonitor, which, in its new 2021 Top 100 City Destination Index, compares the attractiveness of 100 cities worldwide using criteria including traditional tourist attractions, plus sustainability and health & safety metrics in the era of COVID-19:

1. Paris, France: It was, however ranked low for health & safety

2. Dubai, UAE: With a 98% vaccination rate, it was ranked very high for health & safety

8. London, England: ranked highest worldwide for tourism infrastructure (thanks to the double-decker buses?)

9. Munich, Germany: Up 9 places this year

“Trying is the first step toward failure.” - Homer Simpson, The Simpsons

Imagine the faces on the staff at the Idaho Human Society when 9-year-old Ben Miller stopped in and dropped off a plastic bag filled with $1,150 in cash. He’s been raising money through a lemonade stand since visiting the shelter in 2019 and noticing that some cats didn’t have toys. Ben’s mom, Amy, says he spent hours selling lemonade — even offering lavender flavor — alongside treats like cookies, and has raised over $2,000 in total. Some people have traveled nearly an hour to get refreshments and make a donation, and others have sent money online. A rep from the shelter said they’re in the middle of kitten season, and every dollar they can get helps pay for medical care, food, and yes, toys.